Morning Buzz! We Are All This Baby Crying Watching Ariana Grande Singing “Somewhere Over the Rainbow” 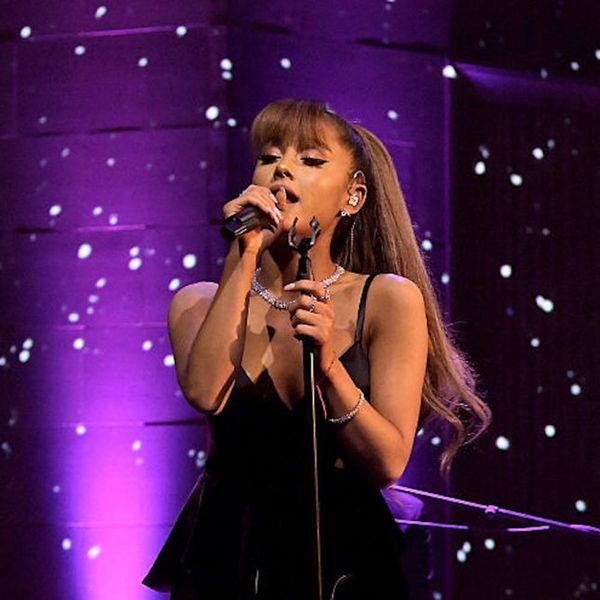 Ariana Grande continues her charitable efforts for Manchester in this morning’s top news stories. Check out that and more below in Wednesday’s Morning Buzz.

1. Following Sunday’s super emotional One Love Manchester benefit concert, Ariana Grande has released the live version of her emotional cover of “Somewhere Over the Rainbow,” with all proceeds going to the victims. Grande, who herself is no doubt still processing the grief of the suicide bombing that occurred at the Manchester stop of her tour, posted a video of a sobbing baby watching her close Sunday’s benefit with the Wizard of Oz song, and honestly, that baby is all of us. Sniff. Listen to the song here.

2. The big Pretty Little Liars engagement that everyone has been waiting for finally happened, and people cannot handle it. SPOILER WARNING! If you haven’t seen this week’s episode yet, don’t read this! In last night’s episode, Caleb proposed in a super anti-climactic way, but it was sort of perfect, and Haleb shippers get the endgame they wanted. Twitter user @bexsayers said last week that if it wasn’t them, she was going to sue, so she’ll be happy — as, it seems, are a LOT of fans, who are flooding PLL Twitter with a lot of sobbing emojis RN. (Photo via Kevin Winter/Getty)

3. Chrissy Teigen and John Legend throwing out the first pitch at a Seattle Mariners game with Luna is #FAMILYGOALS. John Legend had a couple of shows on his current tour in Woodinville, Washington, this week, so they made their way to a Mariners game for Luna to make her Major League Baseball debut. BRB, DYING OF CUTE.

4. There’s an open casting call for the Fantastic Beasts and Where to Find Them sequel. Ever thought you or someone you know could pull off playing a young Newt Scamander, Leta Lestrange, or a teenaged Gellert Grindelwald or Albus Dumbledore, and skyrocket to fame like the original Harry Potter kids did? Now’s your chance! The Pottermore team has posted their open casting call for the young actors — although, bummertown, it’s only open to UK, Irish, and/or EU passport holders. The Fantastic Beasts sequel doesn’t come out until November 2018, but it starts filming this summer. (Photo via Jamie McCarthy/Getty)

6. Quote of the day: “When I have bad days, I just eat lots of chocolate ice cream and dance to the Lion King soundtrack.” This Blake Lively gem works perfectly for today’s National Chocolate Ice Cream Day — and for every day!

What’s your way of getting over a bad day? Let us know @BritandCo!