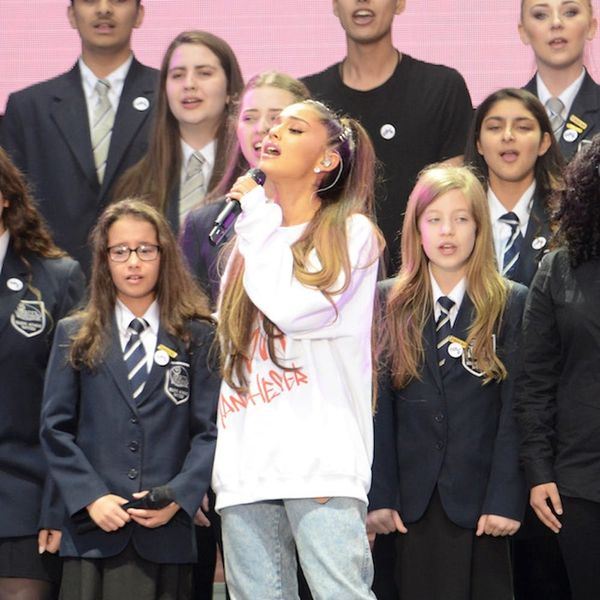 An emotional day in Manchester and an important message from another attack victim’s parents lead this morning’s top news stories. Check those and more out below in the Monday Morning Buzz.

1. If you watched Ariana Grande’s Manchester benefit concert yesterday, you’ll know that there were many moving moments throughout — Justin Bieber had a hard time keeping it together as he paid tribute to the previous concert attack victims, and Grande herself closed the night with a tearful rendition of “Somewhere Over the Rainbow.” But it was an unexpected moment caught in the crowd that has gone viral and will surely make you emotional. Spotted in the crowd was a group of young fans holding hands with a police officer, dancing in a circle, being as carefree and joyful as they should at a concert with their favorite artists. It was a poignant and (likely unintentionally) defiant moment, and you won’t forget it anytime soon. Check it out above.

2. People totally think Tyga is dissing Kylie Jenner in his new song. In Tyga’s new song, called “Playboy,” some of the lyrics sound like they could MAYBE be about his recent ex. “She a superstar / She got it bad for me / If I hang up, she call right back to me,” he raps. “You cut her legs off / She crawls right back to me / I call it playboy tenacity.” While none of it *really* sounds particularly personal, their relationship did last a long time, so who ELSE could it be?! You can listen to the song here. (Photo via Jamie McCarthy/Getty)

I can't wait to spend forever with you my darling!! I'm the luckiest girl in the whole world. I ❤️ YOU to the moon and back @mattyice432 Thank you for a magical evening I will forever remember.

3. Arrow star Katie Cassidy is engaged, and her ring is TDF. Cassidy announced via Instagram early this a.m. that her and fiance Matt were engaged. “I can’t wait to spend forever with you my darling!! I’m the luckiest girl in the whole world,” she wrote. “I ️ YOU to the moon and back @mattyice432 Thank you for a magical evening I will forever remember.” Seen in the sweet pic of them sharing a kiss is Cassidy’s gorgeous (and MASSIVE) oval-shaped diamond, which steals the show here. Congrats to the happy couple!

4. The parents of London attack victim Christine Archibald released a powerful and inspiring statement that everyone needs to read. Archibald, a Canadian, was the first victim named in Saturday’s attacks in London. In a statement to the press, her parents say she “believed every person was to be valued and respected,” and that she “would have had no understanding of the callous cruelty that caused her death.” As they go on to detail her work in homeless shelters and in her community, it’s a powerful reminder of the tenacity of the human spirit in the face of fear. Sending all our love to her family and friends.

When there's a tornado but mowing the lawn is on your to-do list. 🌪️ https://t.co/E2y60PD9iB

5. This viral photo of a man calmly mowing his lawn while a tornado rages behind him is peak dad. Meanwhile, in Canada: A man in Alberta says he was “keeping an eye on” the tornado that was a safe distance from their home but could be seen clear as day behind him as he made sure to get the lawn mowed. TBH this picture perfectly sums up life sometimes: Just ignore the storm and get it done. (h/t CBC)

6. Quote of the day: “Love is like a virus. It can happen to anybody at any time.” Maya Angelou’s words remind us of the message from the Manchester benefit concert — love wins.