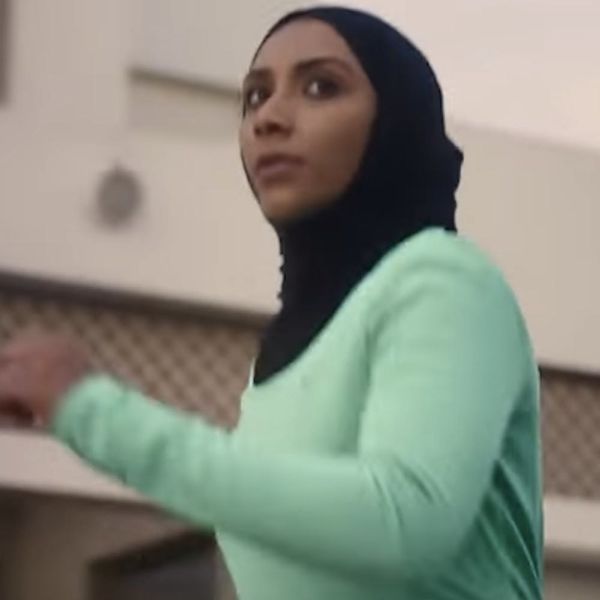 We’ve been seeing a rather encouraging trend with regard to marketing for big name companies as of late: inclusivity. From CoverGirl’s new coverboy and L’Oréal’s True Match shades to Lush’s pro-LGBTQ bath bomb spot, there’s a whole slew of businesses stepping up to show their consumers they truly care about each and every one of them.

The latest company throwing its hat into the inclusive ring is a biggie, and its message may be more important than ever. Nike Middle East released a commercial featuring Muslim women as athletes, and it has the internet buzzing.

Opening on a woman in a hijab running down the street as onlookers stare, a voice asks, “What will they say about you?” It goes on to say, “That you shouldn’t be here. That this is not for you,” on a boxing scene set in the desert. While the line is likely referring to the athletic arena its models are shown in (a rising source of tension for women in the Middle East), we can’t help but think it might also have a double entendre too, given President Trump’s recent immigration ban, which largely affects Middle Eastern countries.

The commercial then switches gears, saying, “Or maybe… they will say that you are strong. That no one can stop you. That you will find your way. That you are their equal. That you amaze them.” Demonstrating that fact is runner Amal Mourad, who makes a super hero leap across building tops. As she told Reuters, it’s actually quite a feat that she’s in the commercial, considering she once had to fight to even train. “Convincing my father [to let me train in a gender-mixed gym] was the toughest part… if you want something bad enough you stick to it, and you can get it done.”

Ending on a scene of a little girl staring out onto the empty ice, the commercial concludes with, “Or maybe…they will say you will become something great.”

Some were super impressed with the ad..

Nike's ad means a lot to me. I used to feel awkward being stared at while jogging with my hijab, I ended up choosing to walk instead

Others… not so much.

But either way, we’re happy it exists to spark the discussion. Watch the ad in its entirety here.

What’s your favorite inclusive ad? Tell us over @BritandCo.

Nicole Briese
Nicole is the weekend editor for Brit + Co who loves bringing you all the latest buzz. When she's not busy typing away into the wee hours, you can usually find her canoodling with her fur babies, rooting around in a bookstore, or rocking out at a concert of some sort (Guns N' Roses forever!). Check out all her latest musings and past work at nicolebjean.com.
Athleisure
Politics
Athleisure Politics