Nancy Pelosi Made an Eight-Hour House Speech to Defend DACA 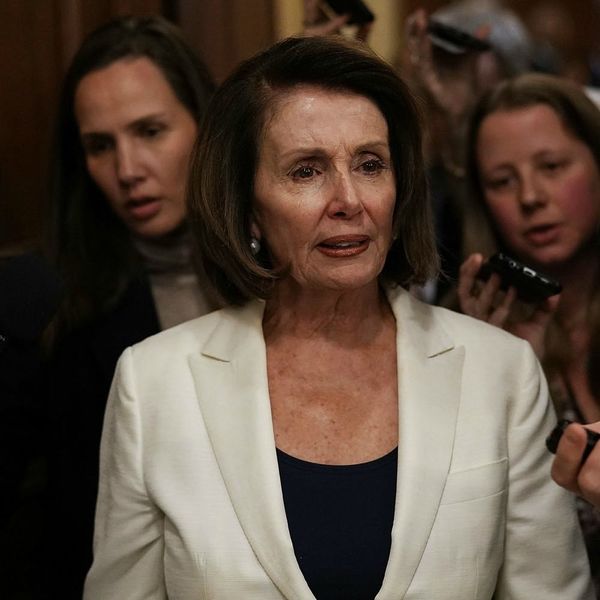 On Wednesday, House Minority Leader Nancy Pelosi spoke for eight hours and five minutes in order to delay the vote on the Republican’s planned budget which Pelosi’s Democrats are hoping to squash — the GOP need Democratic support to make their bill a legal reality.

Taking to the podium at around 10 in the morning, Pelosi began her marathon speech — the longest ever recorded in the House, according to the House Historian (via CNN).  Pelosi gave testimony on behalf of DACA recipients by putting names to the thousands of DREAMers who will be affected by the GOP plan to end DACA, and what their contributions to American society truly mean.

Pelosi’s goal was to help shed light on exactly why Democrats do not want to vote on the GOP’s budget bill as-is. The party feels that without guarantee of protections for DREAMers and those hoping to apply for DACA, they cannot support it, so Pelosi gained time with her speech. And although some are calling it a filibuster, the House does not have an equivalent to that Senate stall tactic. Either way, we can definitely call this mega speech an act of defiance.

She spoke for 8 hours and 5 minutes in 4 inch heels because #DACADreamers kids are worth it! #DACAbuster pic.twitter.com/efJuQaSRLq

Generally, in the House, each representative is only given one minute to speak, but party leaders have unlimited time to make their case, so Pelosi decided to speak for the entire day. At the end of her time, Pelosi implored Speaker Paul Ryan to allow for a vote on the floor, while thanking DREAMers for their contributions to America.

“Let us thank and acknowledge the DREAMers for their courage, their optimism, their hope. For their inspiration to make America more American,” she said to a round of applause. But while the Democrats look at DACA as a financial issue, the GOP doesn’t.

“We’ve laid out what we would like to see in immigration legislation and I think it’s something Nancy Pelosi should support and hopefully she’ll come on board,” Press Secretary Sarah Huckabee Sanders said during a White House briefing Wednesday. “We can get this budget deal done and then we can focus on getting this immigration deal done.”

There is no word as of Thursday afternoon on how the budget bill will play out.

What do you think of Pelosi’s stall tactic? Let us know @BritandCo!