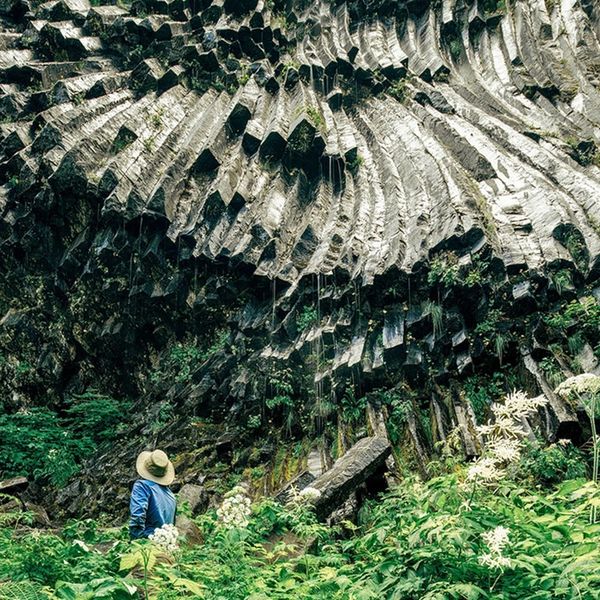 As you begin to draft those 2016 New Year’s resolutions, a fitness related goal is probably going to take the number one spot. But we’re guessing a travel related resolution will be following close behind. Maybe you want to make 2016 the year that you take a big trip but you’re not sure where to go. Here’s where National Geographic can help. The publication recently released a collection of the best travel photos of 2015 — and they’re going to make you book a plane ticket immediately.

1. Trollstigen, Norway: Photographer Sean Ensch captured this shot of western Norway’s famously serpentine Trollstigen road. “I was lucky enough to live here for two months during summer and one evening I saw the valley filling with fog,” he says in his 2015 Traveler Photo Contest submission. “So I drove up the road to watch the late summer midnight sun set as the fog swayed through the valley below.” (Photo via Sean Ensch)

2. Skaters on Lake Baikal, Russia: This photo was taken while ice-skating on Lake Baikal in Russia, says Evgeny Dubinchuk, who submitted it to the 2015 Traveler Photo Contest. “Baikal in winter becomes the biggest ice rink in the world, fully covered with small and huge cracks, resembling a spider’s web,” he says. “On the photo, you can see small figures of skaters dragging loaded sledges behind.” (Photo via Evgeny Dubinchuk)

3. Coyote Buttes, Arizona: A hiker makes his way through the Wave, a swirl of striped, fossilized dunes in the Coyote Buttes of Arizona’s far north. The Bureau of Land Management admits only 20 people a day to the Wave, so visitors are left nearly alone in the geological wilderness. (Photo via Stephen Matera)

6. Reindeer Herder, Mongolia: Your Shot photo community member Pascal Mannaerts took this picture of a reindeer herder near Lake Khovsgol in northern Mongolia. “Meeting them after several days of horse riding through the taiga and snow at times was unforgettable,” Mannaerts writes. (Photo via Pascal Mannaerts)

8. Cape Town, South Africa: “I took this picture at an amusement park down by the [Victoria and Alfred] Waterfront in Cape Town,” says Philip Grube, who entered the 2015 Traveler Photo Contest. “It was a clear blue sky when I saw these kids crawling, running, and trying to balance themselves in these shiny plastic bubbles in a pool of water. The reflection of the water in combination with the effect of the bubbles under the blue sky looked somehow surreal.” (Photo via Philip Grube)

10. Paris, France: The City of Love spreads around the Eiffel Tower, seen here from the Montparnasse Tower. For many, Paris is synonymous with love itself. The city has been home to such timeless pairs as sculptors Auguste Rodin and Camille Claudel and writers Anaïs Nin and Henry Miller. (Photo via Brian Hammonds)

See the full collection of photos on National Geographic’s website.

What’s the best travel photo you’ve ever taken? Tag us in a pic on Instagram @britandco.

Cortney Clift
Cortney is the senior writer and special projects editor at Brit + Co. She typically covers topics related to women's issues, politics, and lifestyle. When she's not buried behind her computer you'll find her exploring New York City or planning her next big adventure.
Photography
Entertainment
Photography
More From Entertainment