Preview the New (Diverse!) Emoji Coming to Your Phone 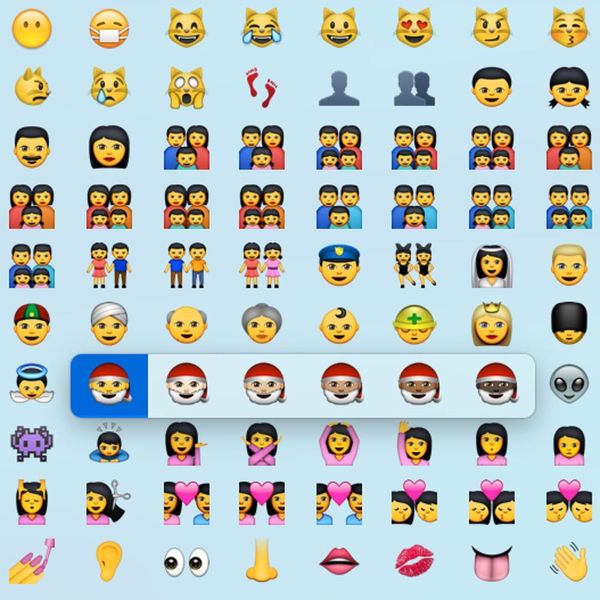 Our emoji wants and needs are as complicated as our conversations dotted with them. There are times when all we want to do is roll over in bed and text 20 tacos and a series of question marks to a friend to communicate our desire for treating a champagne-induced headache with mashed avocados. Sometimes our needs are a bit deeper than that, like wanting diversity and to see ourselves and our family properly represented in the tiny, techy and mostly fair-skinned Greek chorus acting out our lives across every personal and public platform our smartphones connect to.

Get ready for a little of column A and a whole lot from the much-needed column B because Apple has released a new beta of OS X 10.10.3 for lucky developers to test out. it includes a look at new versions of emoji that satisfy both the [dancing girls] and the [stack of books] inside all of us.

In the OS X (and iOS 8.3) release, you’ll be able to modify the skin and hair color of a variety of icons in the People category. A dropdown (or really, drop across) menu will reveal six different options in a range of skin pigments and hair shades on emoji, from the waving hand to Santa to the princess. As the currently represented royalty’s blonde haired, blue eyed doppelganger, this is a crown I’m happy to pass along.

There’s also a major boost in options for family friendly imagery. While the current familial option shows mom, dad + son, the upgrade will let you choose from mom, dad + daughter, mom, dad + two kids (two daughters, two sons or a son and a daughter) and the same variations with two moms and two dads. And you thought Graham Moore’s Oscars speech was the only thing that was going to make you love the world a little bit more this week.

Travel + Places adds 32 new countries’ flags and the Objects + Symbols category also features shiny new Apple devices, including an iPhone 6 with an upgraded OS, an Apple Watch and an iMac like the one that might be sitting on your office desk right now.

There’s no word yet on what if anything new is cooking in the food category, but we’ll pass on the tacos and be happy that the Unicode Consortium is keeping their promise to make the character set as diverse as the people who use it. iOS 8.3 won’t be coming to a phone near you until after 8.2’s rumored release in March so expect a public iOS 8.3 launch with the emoji you’ve been waiting for in the spring or summer.

What emoji are you most excited for — and which are you still waiting to see?

Lisa Raphael
In her past professional lives, Lisa has served the masses as the Editorial Director at Brit + Co, Bieber Whisperer at J-14, Golden Girls Fan Club Prez at Lifetime and Talk Show Host Understudy to Katie Couric. Now, she's taking on the sports world at The Relish, teaching Hairography 101 in her spare time and will forever be trying to fill the hole Zayn Malik left in her heart.
Emoji
Tech
Emoji
More From Tech