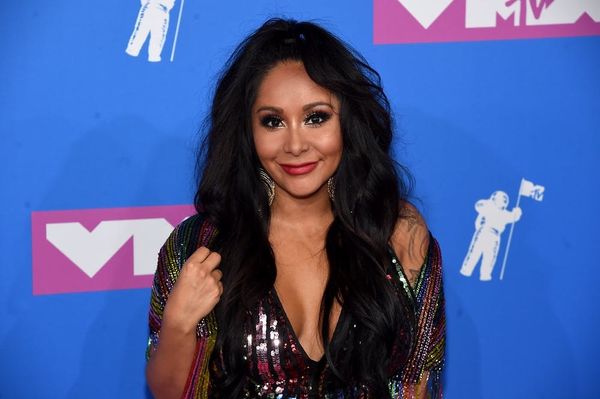 Another little meatball is on the way! Nicole “Snooki” Polizzi revealed on Instagram on Thursday, November 22, that she and husband Jionni LaValle are expecting their third child.

“What I’m thankful for this Thanksgiving,” Polizzi wrote on Instagram, alongside a pair of photos of her two children, Lorenzo, 6, and Giovanna, 4, holding up and admiring a photo of a sonogram.

The Jersey Shore star didn’t share any other details, but in a recent episode of season 2 of the rebooted reality show Jersey Shore: Family Vacation, Polizzi revealed that she and LaValle had been trying to conceive a third child. At one point, she even thought she might be pregnant.

“I never throw up, even when I was little,” she said after feeling ill. “So I’m like, okay, me and Jionni are trying to have a baby — maybe I’m pregnant. I feel weird right now. I didn’t eat anything to make me sick, so why am I throwing up now?”

She and BFF/costar Jenni “JWoww” Farley then went to buy a pregnancy test before continuing on for a night out with the rest of the roommates. The test at the time was negative, and Polizzi seemed disappointed that her sickness meant she was simply “old and can’t f–king hang anymore.”

MTV has not yet announced plans for a third season of Jersey Shore: Family Vacation. It’s possible that should a third season happen, Polizzi could still participate, though not in as regular a role. In season 2, cast member Deena Cortese, who is pregnant with her first child and due in December, sat out the full vacations with the roommates, but still appeared for special occasions such as a Friendsgiving dinner at Vinny Guadagnino’s house.

Congrats to the growing Polizzi-LaValle family!

Were you surprised to hear that Snooki is expecting another meatball? Let us know @BritandCo!