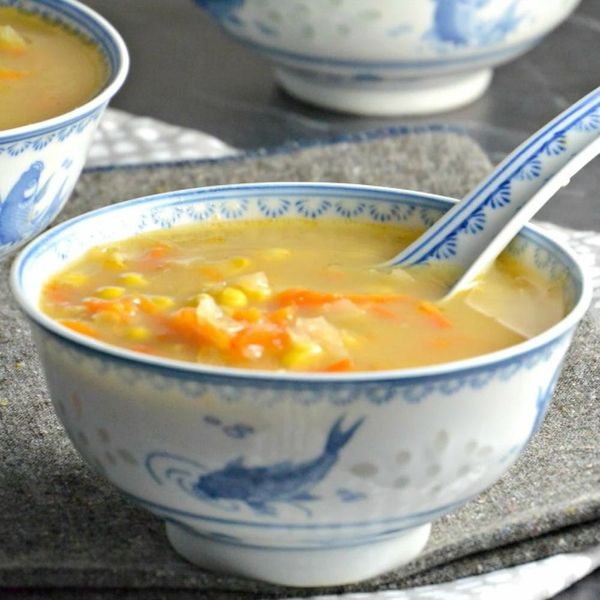 On chilly nights, or when your soul needs some comfort, nothing hits the spot like a bowl of soup. Spicy soups warm you from the inside out, and noodle soups are like a meal and an activity all in one. Even if you only have a few minutes, you can whip up a 15-minute blender soup to sate your cravings. But chowder, with its creamy broth and hearty texture, is a special kind — even when you leave out the signature clams. From corn to curry, these 16 chowder recipes will make you want to have soup for dinner every night of the week.

Ham brings intense umami to any soup. Add sweet, earthy parsnips for a chowder you’ll want to devour for supper. (via Cotter Crunch)

Make a creamy vegan stew that tastes like the New England classic, thanks to a few simple swaps. Sautéed mushrooms sub in for clams, while a blend of cashews and soy milk make the broth taste as rich and delicious as the original. (via Vegan Huggs)

Corn chowder is always a hit, walking the fine line between sweet and savory in a most delicious way. But bacon, with its smokey and meaty flavor, really sets this recipe over the top. (via Peas and Peonies)

Ham and bean soup is even more crave-worthy when it’s amped up with a creamy broth. Just a splash of heavy cream is all it takes to make a leftover ham hock and some dried beans taste like a five-star meal. (via The View from Great Island)

A take on Thai tom kha, this chowder is made with coconut milk. Each bite is filled with the flavors of makrut lime leaves, ginger, and chilies, which lend intense flavor to the white fish, potatoes, and veggies that make up the bulk of the meal. (via Sippity Sup)

Chock full of tomatoes, veggies, and chickpeas, this take on Manhattan clam chowder is great for all diets. It’s vegan and gluten-free, but still has all of the elements of great comfort food. (via Connoisseurus Veg)

This spiced stew will warm you from the inside out. It’s made with plenty of veggies, quinoa, and some juicy shrimp to make it a full meal. (via What to Cook Today)

Made in a pressure cooker, this vegan chowder comes together in no time. It’s delicately flavored with just a hint of sesame oil, grated ginger, cumin, and soy sauce, to let the flavor of the corn, carrots, and cabbage shine through. (via Veggies Save the Day)

Rich and hearty, this soup gets incredible flavor thanks to a simple technique. The potatoes are roasted before being added to the coconut milk broth and pureed, lending a toasted, caramelized note to each spoonful. (via Domesticate Me)

Cheddar cheese and whipping cream give this soup an unbelievably luxurious texture. Chicken bulks things up, while spices, herbs, and some extra veggies round out the pot. (via Briana Thomas)

This sweet, spicy, smokey seafood chowder hits the mark on all flavor fronts, thanks to a vibrant mix of sweet potato, corn, tarragon, lemon juice, shrimp, and Cajun seasoning (just to name a few!). (via Closet Cooking)

Gently sautéed squash and root veggies form the base of this healthy vegetarian chowder. It’s the perfect meal for nights when you want comfort food, but aren’t in the mood for a heavy dinner. (via Vegetarian Department)

Andouille is a too-often overlooked option when it comes to sausage. It adds a unique, spicy flavor to this creamy chowder, playing well with the sweetness of the corn. (via Nutmeg Nanny)

Zesty lime juice, cumin, fire-roasted chilies, and garlic make this Mexican-inspired soup taste surprisingly light. Mild chicken takes on the flavor of the broth, for a wholly satisfying meal. (via Chelsea’s Messy Apron)
Justina Huddleston
Justina Huddleston is a food writer living in Los Angeles. When she's not busy writing, she spends her time in the kitchen creating both virtuous and decidedly junky vegan food. Buffalo chickpea pizza, anyone? She's also been known to eat a plain block of tofu or beans straight out of the can for lunch, but somehow those culinary adventures don't make it to her Instagram. You can follow Justina on Twitter or see what's cooking in her kitchen on her blog, A Life of Little Pleasures.
Dinner Recipes
Recipes
Dinner Recipes recipe roundup Soup Recipes
The Conversation
More From Recipes