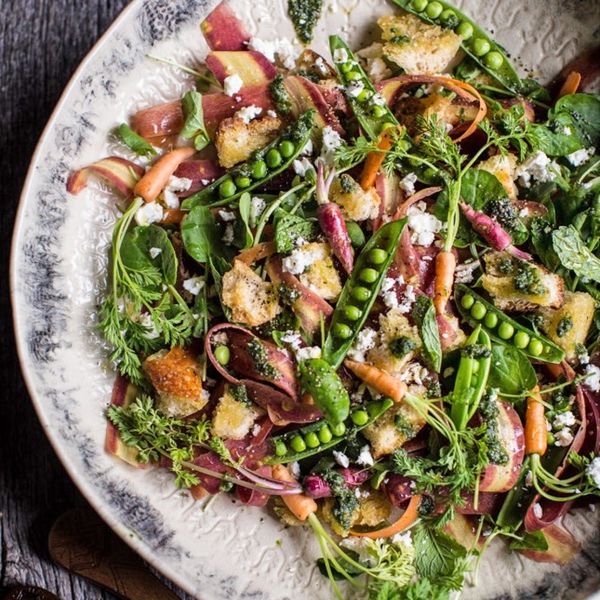 We love to practice being green on a daily basis, whether it’s taking eco-friendly tips from Shailene Woodley or using up leftovers in food scrap recipes. Rather than just trying to avoid foods that are bad for the environment, we thought we’d commemorate this Earth Day with some recipes that really encompass green living. Find delicious uses for cheese rinds, juicing pulp and more scraps you normally toss with these 15 no-waste recipes. It’ll be your tastiest Earth Day yet!

1. Baked Carrot and Coconut Fritters: Don’t toss that veggie pulp from your morning juice. Vegetable pulp contains plenty of fiber and nutrients, and it would be a shame to waste it — turn your leftovers into lunch with this recipe for savory fritters. (via Mari Jasmine)

2. Chicken Liver Pâté With Sage, Apple and Thyme: The no-waste cooking movement encourages the use of all parts of the animal, including offal (AKA organ meat). Though that may not sound appealing, you might be surprised once you try this chicken liver pâté. Cooked down with some spices, brandy and shallots, liver is transformed into a creamy and slightly sweet spread. Bonus: Pâté goes great with wine. (via The Kitchn)

3. Ham Bone Soup: It’s not often that you get to sit down to a feast with a giant ham hock, so when the opportunity to snag a ham bone presents itself, it’s important to take it. The marrow bone is a particularly valuable leftover because of its magical soup-flavoring powers. Here’s the plan: On a lazy weekend afternoon, alternate between binging on Netflix and stirring a delicious pot of ham bone soup at the stove. In just a few episodes of Unbreakable Kimmy Schmidt, you’ll be rewarded with a hearty soup you can nosh on all week. (via The New York Times)

4. Parm Broth: Parmesan rinds don’t have to be sad. Toss ’em into a pot of boiling water with vegetable scraps and a glug of olive oil instead of the trash can, and they’ll be transformed into a rich broth you can use in soups and sauces. (via Bon Appétit)

5. Carrot Soup With Carrot Top Pesto: Those beautiful carrots you bought from the farmers market are so good you can literally eat them whole. Save the green tops for a zesty pesto, no extra herbs needed. It’ll add a salty kick that really brightens up this creamy carrot soup. (via Love and Lemons)

6. Marcella Beans With Sausage and Beet Greens: One of the tastiest parts of beets often goes overlooked; their green tops are similar to other leafy greens like kale or chard. Stir fry them with garlic and onions for a tasty vegetable side, or mix them into tender beans with bacon or sausage, like in this recipe. (via The Taste San Francisco)

7. Vegan Beet Greens, Roasted Vegetables and Black Japonica Rice: Yet another incentive to eat both the beet and the beet greens: There are different nutrients found in each. The greens are rich in iron, while the beet itself is loaded with antioxidants. Using both makes this a balanced, no-waste grain bowl. (via Apollo and Luna)

8. Broccoli Stem Noodles With Sesame Ginger Dressing: Zoodles are all the rage, but have you tried Broodles? Okay, that name might not catch on, but that doesn’t mean broccoli stem noodles won’t. Even if you don’t have a spiralizer, you can still make these veggie noodles with Asian-inspired flavors. Just use a julienne peeler on your broccoli stems. (via All Day I Dream About Food)

9. Spring Pea and Carrot Salad With Carrot Top Pesto: Celebrate Earth Day to the fullest with a salad that’s green *and* waste free. Here’s another great use for carrot top pesto — salad dressing! (via Half Baked Harvest)

10. Beet and Pomegranate Galette: You know the old adage: When life gives you beet stems, make a galette. No? Well, you should make this rustic savory pie anyway. Beet stems pair well with Mediterranean flavors like sweet and tangy pomegranate molasses and salty za’atar spice. This light dish is perfect for a picnic or movie night in the park. (via BK17 Bakery)

11. Root Vegetable Peel Chips: Next time, instead of throwing your root vegetable peels in the trash, turn them into chips. This recipe is from Dan Barber, the chef and co-owner of Blue Hill in New York, known for his philosophical approach to sustainable eating — so you know it’s legit. Use brightly colored veggie peels for a more a-peeling (sorry) chip spread. (via Tasting Table)

12. Carrot Taco Shells: In the spirit of Earth Day, use leftover carrot pulp from your juicer for these low-carb taco shells. Carine from Sweet as Honey likes to top her tacos with a green salad and sprouts, but you can dress yours up with whatever filling you prefer. (via Sweet as Honey)

13. Roasted Bone Marrow and Parsley Salad: Nose-to-tail cooking is a delicious way to cut down on food waste. Marrow bones were once considered a delicacy for dogs; now they’re a staple on fancy restaurant menus. When roasted, bone marrow is like nature’s butter — spread it on toast and you’ll see exactly what we’re talking about. (via Wild Greens and Sardines)

14. No-Waste Tacos de Carnitas With Salsa Verde: You won’t want to leave even a little bit of these no-waste tacos. In a genius culinary twist, the juices and fat from the roasted pork go directly into the tomatillo salsa, giving it a rich boost of flavor. Roasting the pork in a little orange juice instead of frying it in copious amounts of lard also makes this recipe a little healthier and easier to tackle, without compromising taste. (via Serious Eats)

15. Velvety Mushroom Soup: Shiitake mushroom stems might seem inedible due to their rough, woody texture, but as with most vegetable scraps, they make one heck of a broth. Shiitake stems are super flavorful, but feel free to add in other mushroom stems for a more complex broth. (via Food52)