10 Off-Radar Finds Along the Pacific Coast 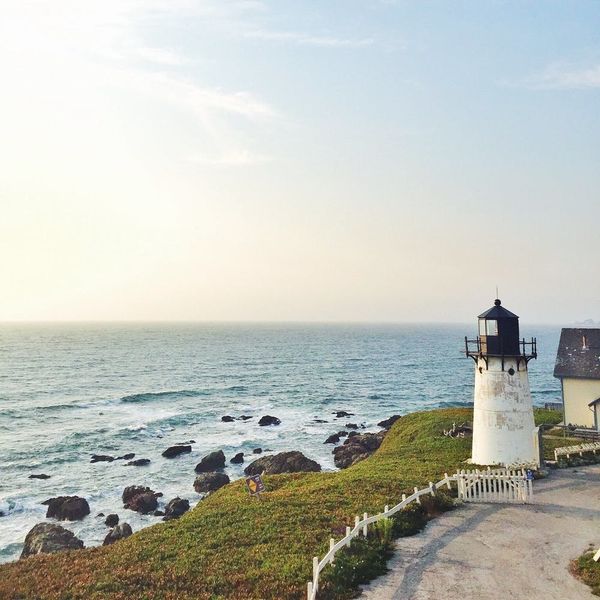 Over-water cabins, lighthouse hostels, tiny island distilleries — these laid-back spots dot the west coast from southern California all the way up to British Columbia and just might inspire a quick weekend trip.

1. Crystal Pier Hotel, San Diego, CA: Ripe for a breezy girlfriend getaway or a lovebird weekend away, this collection of historic Cape Cod-style cottages sits on San Diego’s retro Crystal Pier. Each one comes with its own kitchenette (convenient for breakfast and lunch prep on the cheap) and private deck (nicely outfitted with chaise longues and an umbrella-shaded table). (Photo via Crystal Pier Hotel)

Bonus points: Nearby Baked Bear is famous for their custom ice-cream sandwiches (seriously a why-didn’t-I-think-of-that concept). First, you choose your top and bottom — mixing or matching from a selection of cookies, brownies and donuts — then you pick your ice-cream flavor (”Bear Batter” is the play), and finally, select your toppings, which could be Oreo crumbs or hot fudge.

2. Malibu Farm, Malibu, CA: This farm-to-fork concept has a pair of locations: a sit-down restaurant at the beginning of the Malibu Pier and a counter-service cafe at the end of it. The menu is similar at both — sink-your-teeth-in breakfast burritos, all-organic salads, luscious grass-fed burgers — but the cafe does have outside seating right on the pier under strung lights, which gives it the edge. It’s a magical place at dusk on weekends when it stays open a little later. (Photo via Malibu Farm)

Bonus points: Hiker-ready Backbone Trail, which winds for 67 miles from Malibu to Pacific Palisades and has been under construction since the ’60s, just opened in June.

3. Olivas Adobe, Ventura, CA: Only a stone’s throw from the bars, boats and seafood joints of the Ventura Harbor, this 1800s hacienda feels like a throwback, a place where Old California lingers, trapped in some kind of time warp. Thick adobe walls cool down an interior filled with period furniture, and the surrounding grounds hold a rose garden, fountains and an impressive number of cacti. Wandering the grounds is free, while tours of the house go for $5. (Photo via Spot.com)

Bonus points: On Saturday evenings in summer, Olivas hosts a Music Under the Stars concert series featuring an eclectic lineup that spans from classic rock tribute bands to salsa to zydeco.

4. Nepenthe, Big Sur, CA: On a sunny day, an hours-long lunch at one of Nepenthe’s alfresco tables is one of life’s purest pleasures. The restaurant is a classic — serving since the 1940s — and the view and vibe are so good you won’t at all mind the inevitable weekend wait (not to mention that you can order a drink and chill out on floor pillows while you do). A chimichurri-doused rib eye and pan-seared tuna make an appearance on the surf-and-turf-heavy menu, but the most famous dish of all is the ambrosia burger, named for a “secret” sauce that’s a spicy-creamy mix of mayo, tomato sauce and salsa. (Photo via Spot.com)

Bonus points: Just down the road, you’ll find the Henry Miller Library in a tree-shaded cabin once belonging to Emil White, a longtime pal of Miller’s who himself resided in Big Sur for 18 years. In keeping with the artistic leanings of its former owner and his devil-may-care tribe of creatives, it’s now a cultural hub, bookshop and venue with an outdoor stage where bands play on summer evenings.

5. HI Point Montara Lighthouse, Half Moon Bay, CA: A lighthouse-turned-hostel with nothing between you and the big blue Pacific. What more do you need to know? That you can spend the night in an 1875 lighthouse station? That there are both shared and private rooms? That the sound of the ocean crashing will lull you to sleep? That whale and dolphin sightings are frequent? The lighthouse is a quick drive from SFO, but even if you’re from the area, a staycation is in order. (Photo via Spot.com)

Bonus points: An outing to the Half Moon Bay Coastal Trail is a must. The easy-going hike (walk, really) winds past pocket beaches and fantastical artists’ studios that look straight out of Hobbiton.

6. Nick’s Cove, Marshall, CA: First the welcome: Other hotels give you a bottle of water (if you’re lucky), but Nick’s lays it on with cocktails and a platter of barbecue oysters. Next, the rooms (ahem, try stand-alone cabins): There are 12, with five out over the water, and all with a rustic-chic charm that’ll have you kicking back on your porch with sandy toes and a cold beer one minute and soaking in your huge copper tub the next. And, finally, the restaurant: It’s a charismatic community hub that feels like a cross between salty-dog dive and hunting lodge, only the food’s superb. Go late, after the crowds clear out, go for a window seat and go easy on the oysters (there are many in your future). (Photo via Spot.com)

Bonus points: Stop by the Tomales Bay Oyster Company, grab a bag of oysters and take them down the coast about half a mile to Millerton Point beach, which will be far less busy. Of course, this means you need oyster-shucking accoutrements and fixings on hand. Bring them with you, grab them while you’re at Tomales Bay or pop into The Marshall Store before you hit Tomales. Your mission for the day: Shuck, slurp, sunbathe. Repeat.

7. Bandon Beach, Bandon, OR: With those offshore rock formations, Bandon is less known but equally as striking as its more famous north-Oregon cousin Cannon Beach, which played backdrop to goofballs and vamps in The Goonies and Twilight. Hit the beach early in the morning when it will be blissfully deserted (save perhaps one early-rising dog owner and pooch), then commandeer an outside table for fresh crab and smoked fish at Tony’s or Bandon Bait & Tackle, both tackle shops doing a bang-up job with their seafood-shack side gigs. (Photo via Spot.com)

Bonus points: You can rent the 1905 cobbler-built River House for a one-of-a-kind stay in a lofty, historic space right on the river.

8. Heceta Head Lighthouse Keepers House, OR: With panoramic vistas of the Pacific, the working 1894 Heceta Head Lighthouse is perched cliffside near the pint-size town of Yachats. To say the lighthouse gets its picture taken frequently is an understatement; the pop of red and white against an evergreen background is essentially the paint-by-numbers version of a stunning photo. Point, shoot, score. (Photo via Spot.com)

Bonus points: While many people come for a couple hours — tops — most don’t realize that you can actually overnight in the lighthouse keeper’s home, a Queen Anne-style beauty flanked with covered porch (pictured).

9. San Juan Island Distillery, San Juan Island, WA: You’ll find this charming family-owned distillery a couple hours north of Seattle on postcard-ready San Juan Island. On Saturdays, its ciders, gins, brandies and liqueurs, produced French-style in a large copper still, can be sampled in a lovely little on-site tasting room. In keeping with the very PNW all-things-local maxim, apples from a neighboring orchard are the base of most of its liquors, and island botanicals like wild roses and blackberries flavor limited releases. (Photo via San Juan Island Distillery)

Bonus points: While on the island, drop by Pelindaba Lavender Farm, where 25 dizzyingly fragrant acres of organic lavender fields and a lakefront location make for a magical place to wander.

10. Wickaninnish Inn, Tofino, B.C.: You come to this hotel for the storm-watching: Viewing the waves, winds and rain through the floor-to-ceiling windows of the inn’s luxe lobby, hot toddy in hand, made it famous. But when skies are clear, the hotel’s Ancient Cedars Spa, oriented to the open Pacific, has the kind of views you write home about — or at least post on Instagram. This is the spa for the not-a-spa-person crowd, where the Cedar Escape Treatment, a rub-down with organic sea salt followed by an aromatic massage, gives new meaning to the term “come undone.” (Photo via Wickaninnish Inn)

Bonus points: The town of Tofino, a short jaunt north, holds a handful of sweet artisan shops, the kind that are curated to a T and bonkers for all things small-batch and handmade. Habit is a goodie, selling an imaginative ensemble of coastal-cool clothing and local jewelry.