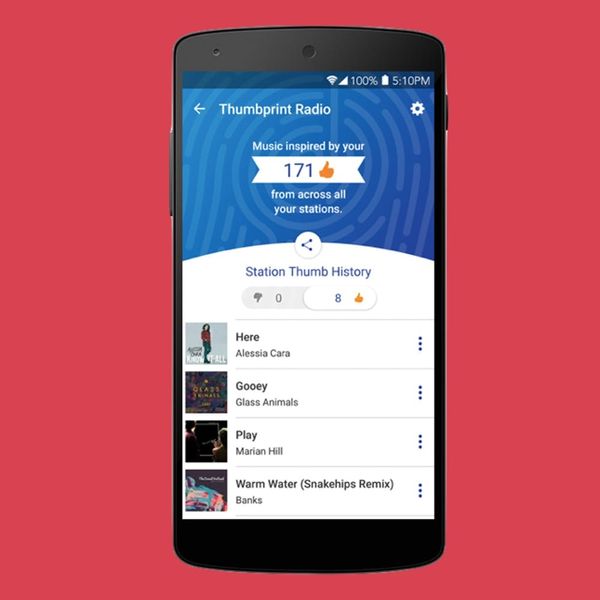 Music streaming is pretty much the standard for how people get their audio these days — that’s why people were so heartbroken when Adele decided NOT to release her record breaking new album 25 on Spotify and Apple Music. In case you were one of those Adele fans, we’ve got some news that will definitely cheer you up. Pandora, one of the OG music streaming apps/sites out there, is back with a brand new update that’s definitely got audiophiles pumped.

Today, the music streaming co changed the game by releasing Thumbprint Radio. According to Pandora, Thumbprint Radio is a “hyper-personalized radio station” that is made up of all the songs you’ve thumbed up in Pandora. EVER. You need to have at least three channels and have liked at least four songs on each, and Pandora’s musicologists with take it from there. Yeah, prepare yourself for a trip down memory lane. Don’t worry — in typical Pandora fashion, the app will throw in some songs you’ve never heard before, so you can keep discovering new music.

The best part about the station is that it’s super easy to share with your friends, and following their Thumbprint Radio stations is also easy. Whatever you like and dislike on each other’s stations won’t affect the other person’s Thumbprint — just your own.

To that, we say two thumbs up.

Will you be trying out Thumbprint Radio? Tweet us @BritandCo!

Kimberly Wang
Kimberly Wang writes about all things pop culture, tech, style, and beauty. She's a Bay Area transplant and has an MFA in Creative Writing from Columbia University. On a sunny New York day, you can find her hanging out with her mini schnauzer Isabelle Jellybean on a blanket in Central Park.
Music
Tech
Music Streaming
More From Tech