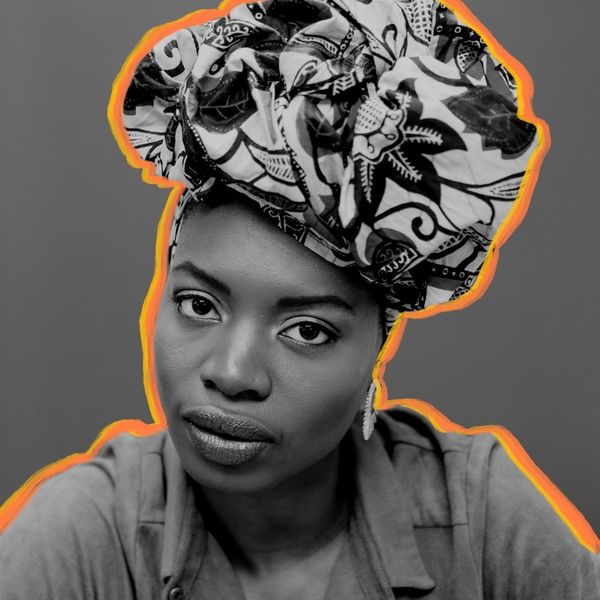 Paola Mathé is a fashion icon and eternal optimist who will forever be proud of her Haitian roots. Raised by strong women, Mathé now runs a headwrap brand that aims to strengthen women everywhere.

Paola Mathé walks the streets of Harlem like a queen in her kingdom. Standing at nearly six feet tall and flaunting one of her famous patterned headwraps, she's hard to miss — a modern-day Nefertiti, but with an important distinction: Mathé's not Egyptian. She is a proud Haitian immigrant.

The way Mathé talks about her childhood in Pétion-Ville, Haiti almost sounds like the setting of a yet-unmade Disney movie. Her early years were spent in the spacious and colorful home her great-grandmother built. Chickens clucked away in the backyard. Merchants lined the streets outside, where a steady stream of Haitian women bombarded her with lessons of wisdom and of courage. "This was my Haiti," Mathé says.

Dressed in a colorful ensemble and constant smile, the Paola we meet on a hot spring day in Manhattan feels like a walking poster child for the radiance that comes from embracing your self-worth. So it's a surprise to learn that Paola was a shy and reserved child who often felt like an outsider.

While her mother was downstairs hosting her frequent parties, young Paola could be found up in the attic poring over a box of sappy romance novels, enthralled by the various worlds painted between the spines. That attic became her solo hideaway, where she spent hours cloaked in spiderwebs and buried in books.

Those attic paperbacks launched her earliest fantasies of life beyond the Caribbean island. "When I started reading the books [I thought], 'People don't understand me here. I want to be where this character is'," she remembers.

While some of Mathé's early memories sketch a rose-colored image of Haiti, she wasn't oblivious to the economic struggle associated with her home island. Her house had no electricity, and blackouts were common. She remembers seeing "pregnant women on the side of the road giving birth."

She also found that her perception of women as strong and powerful creatures didn't match her society's views, and remembers some Haitian men treating women "as if they were their property." Suffice it to say, chivalry wasn't something that was custom or common.

Then, at 12 years old, Paola was plucked from her quiet, cobwebbed attic in Pétion-Ville to be reunited with her father who had already immigrated to America. At this point, she was ready for a change. "I was just so excited because I was so close to these characters I was reading about. If you're growing up and you know that there could be bigger opportunities elsewhere, you're going to do what's best for your family." She was still a shy girl who had trouble making eye contact, but she was on the brink of a transformation.

But Paola's paperback fantasies and her American reality strongly differed. They set up in a one-bedroom apartment in Newark, New Jersey, a city outsiders might only know for its international airport. "You're reading about all of these almost-fairytales and then you move in as a Black family who speaks no English, into one of the poorest neighborhoods in America," she says. "It's not what you're reading about. It's not what you're seeing on TV."

At first, Paola's shy tendencies made it difficult to adapt. Like most immigrants, Paola recalls bouts of loneliness and feeling overwhelmingly out of place. But her high school years proved to be key in the formation of her blossoming confidence.

While navigating the complicated new cultural landscape America offered, she had no other choice than to break out of her timid cocoon. "[I realized] you can't get what you want if you're hiding from the world, especially if you have nothing to start with," she explains.

As she moved into adulthood, Paola eventually found her groove managing restaurants in Harlem, handling the operational side of the business. She was successful but still didn't feel fulfilled. "I learned how to have over 100 employees under me," she recalls. "I learned how to fix problems. The only thing missing was being creative, telling a story."

How Haitian Immigrant Paola Mathé Is Changing the Fashion Game

Enter: Fanm Djanm, Mathé's three-year-old headwrap brand and passion project. The fashion label, which specializes in bold, patterned headwraps, translates to "strong woman" in Haitian Creole. With a mission statement that "[encourages] women to wear a bold print, take command of a room, laugh a little too loudly, and pursue their greatest goals," Fanm Djanm feels like a tangible extension of everything Paola stands for.

Headwraps are regularly worn by working women in Haiti, and more specifically by the group of women who helped raise her. So, the production of the vibrant wraps seems a fitting venture for Mathé, as they have woven their way through most of her upbringing.

"The headwrap, when I wear it, makes me stand taller. It makes me feel like I can take on the world. It signifies hard work. It signifies strength, confidence, beauty."

Cortney Clift
Cortney is the senior writer and special projects editor at Brit + Co. She typically covers topics related to women's issues, politics, and lifestyle. When she's not buried behind her computer you'll find her exploring New York City or planning her next big adventure.
From the Outside In
Current Events
From the Outside In entrepreneur fashion fashion design haiti haiti immigrant immigrant immigrant woman
More From Current Events