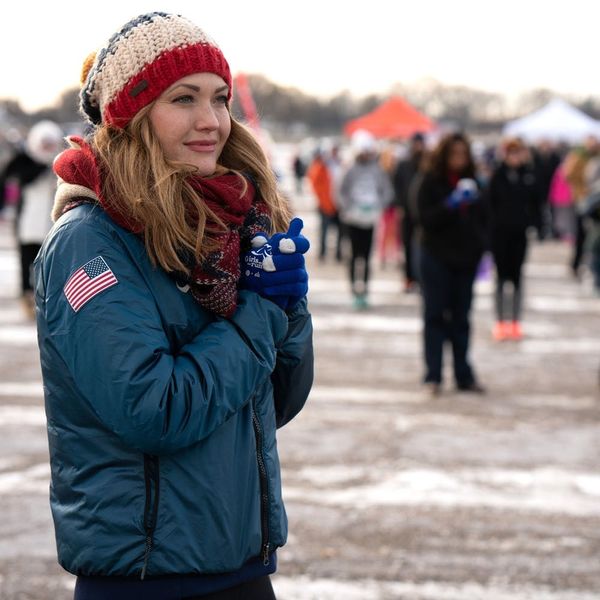 When Amy Purdy was 19, her life changed forever. A hospital visit for flu-like symptoms led to a diagnosis of septic shock, whereby Purdy was put into a medically-induced coma and given the prognosis of a two percent chance of survival. It was only after numerous blood transfusions and the removal of her ruptured spleen that doctors diagnosed the teen with meningococcal meningitis. She had survived. But, as a result of the loss of circulation she’d incurred from the infection, both of her legs had to be amputated below the knee.

Fast forward 20 years, and Purdy has been a medal-winning Paralympic snowboarder (and was instrumental in bringing her sport to the event), a runner-up on ABC’s Dancing With The Stars, and a competitor on CBS’s The Amazing Race. Her 2014 memoir, On My Own Two Feet, became a New York Times bestseller. Oprah Winfrey has called her a hero. Yet, despite an adult life defined by forward motion, Purdy insists she didn’t become an athlete until age 30.

“That’s when I actually started training to be the best snowboarder that I could be,” she tells Brit + Co.

While the idea of starting an elite-level training regimen in your 30s might seem unfathomable to many — okay, most — of us, Purdy had already been lobbying to get adaptive snowboarding included in the Paralympics for half a decade. In 2005 she co-launched the nonprofit Adaptive Action Sports, which would go on to partner with ESPN to run action sport competitions for people with disabilities during numerous summer and winter ESPN X Games. When it became clear that her sport was on track to getting Paralympic Games approval, Purdy recognized an opportunity.

“I wasn’t thinking about age. I just threw myself in 100 percent, and I found out that I was so much more capable than I ever even knew,” says Purdy. “In fact, I wish that I was involved in sports when I was younger, because I think I would have been a pretty good athlete!” Sports build confidence by forcing you to dig deep and persevere, she tells us. The sense of accomplishment on the other side of a physically challenging situation is like nothing else.

Purdy has been described by many people as inspirational; she admits to us that at age 39, she’s already ticked off the major goals of her lifetime bucket list. She explains that she thinks of inspiration as a contagious entity, and she tries to surround herself with it in order to give it back to others. Through her nonprofit, she tells us that she’s constantly engaging with “people who are making things possible for themselves.” She lives in the quiet of nature, where she reads a lot of books and reflects on the life she wants to lead.

Now, Amy Purdy is partnering with Target and Always to support Girls on the Run, a nonprofit that works to empower girls through physical fitness. The matter is close to Purdy’s heart, especially now that she’s watching her nieces come of age.

“We know that physical fitness helps young girls build confidence and friendships,” she tells us. “I think it’s just so important for people to know that this organization exists.”

As for what’s on the horizon, Purdy’s hoping to eventually write a second book and maybe get into acting. But for now, after two back-to-back winter Games and between a string of speaking engagements, she’s laying low with her husband at home in the mountains.

“I appreciate the moment to refuel,” she says. “I think that’s important for women and young girls. It’s okay to stop. You have to be able to refuel yourself so you can have something to give — I think women give, give, give.

“Self-care is really important, and self-care includes those quiet times, physical fitness, and the things you do to feel confident about yourself.”