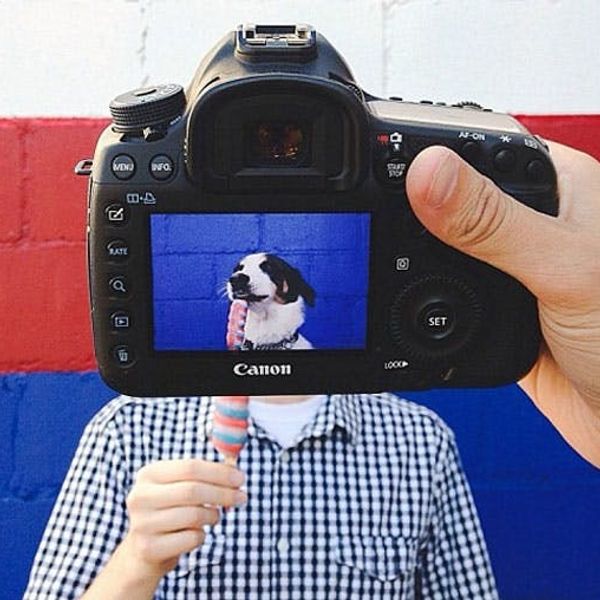 Thanks to the Internet, the world is seeing so many more creative photographs, photo series, and micro-blogs devoted to one type of photo. And with the holidays rolling right around, it’s time to figure out whether or not a photo card is the way to go this year. Before you find yourself leaning against a tree with your significant other while the sun sets, take a look at these 12 awesome, beautiful, and downright weird photo ideas. While some of these may be hard to replicate, we’re sure they’ll provide you with ample inspiration for your own creative photo shoot!

First up, Petheadz! This series puts pet heads on their owners. Genius. We’d love to see the opposite mash-up as well. (by Zach Driftwood)

This beautiful photo series captures dancers in the midst of everyday life. This one features a dancer crossing the street with his mother. (by Jordan Matter)

Wait, what?! Couples simply switch outfits in this head-turning series. Some pairings are more obvious like the top one, but some are pretty subtle and illustrate how similarly some couples dress. (by Hana Pesut)

Recreate a dunk tank and make your series of splash photos. The dude in the middle is the best! (by David Wile)

This micro-blog is AMAZING! It started as one guy capturing his coworkers as wild animals. Now, you can submit your own photos — stay tuned for our own desk safari submission in the next week. (by Mike Whiteside)

Photoshop Your Kids into Ridiculous Situations

Got mad Photoshop skills? Channel them into weirdness by photoshopping your kids into totally strange scenes. (by Emil Nystrom)

Featured recently on the BritList, artist Queenie Liao decided to make her baby’s naptime way more productive. Instead of a simple bed or crib scene, she creates soft landscapes on the floor using fabric, stuffed animals, and other soft odds and ends to create his background setting. So cool. (by Queenie Liao)

These photos were created with a slow exposure and are designed to recreate trees with unnatural objects. (by Mkgk & Raw Color for MU)

We’ve seen album cover mash-up photos before, but this one is particularly awesome. The kid posing as Art Garfunkel is totally killing it. (by Hamada Hideaki)

Part of last year’s photo series roundup, this series captures two sisters doing a whole bunch of “don’t try this at home” stunts. It’s fun to scroll through the series and see how they’ve grown up. (by Jason Lee)

How awesome is this? You can create an entire scene using sidewalk chalk, then simply lie on the ground in the appropriate pose! (by One Eye Click)

Animated GIF of Everyone

Doesn’t this remind of you of the Black or White video? Created by the team at Photojojo, this would make a great digital holiday card for a big family or office! (by Margo at Photojojo)

Or go totally creepy and create a series of photos without your face even in them. Probably not the best idea for a holiday card but we couldn’t help but include it in this post. This series, created by myself and Brit + Co. photographer Chris Andre, started as a silly manifestation of my Creative Director job title, but now has an entire life (and Tumblr blog) of its own.
Anjelika Temple
As Co-Founder and Chief Creative Officer of Brit + Co, Anjelika Temple brings her voracious consumption of all things creative and colorful to DIY projects, geeky gadgetry finds and more. When she's not DIY-ing her heart out, you'll find her throwing dinner parties with friends or adventuring with her husband David, their daughters Anokhi and Indira, and their silly dog Turkey.
Photography
Home
Photography
More From Home