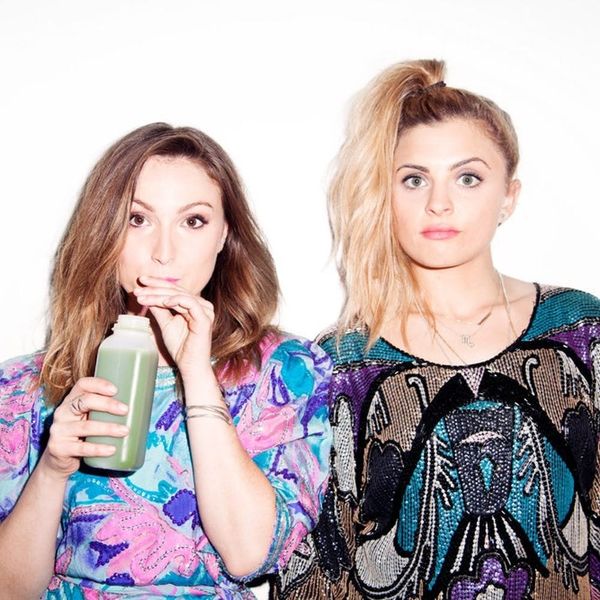 Podcasts are def having a huge moment RN (just try to find someone who didn’t listen to NPR’s Serial), and we love discovering new health or fashion podcasts that are engaging and thought-provoking to help make our commute way more enjoyable. If you’re anything like us, you’ve probably wondered what exactly goes into making a podcast (spoiler alert: It’s pretty simple!). We chatted with Stephanie Simbari and Elizabeth Kott, the charming co-hosts behind the wildly addictive wellness podcastThat’s So Retrograde to get a podcasting primer.

1. Authenticity is key. The ladies’ biggest piece of advice in starting a podcast is to choose a topic that you’re passionate about. “When we started TSR, no one was having a conversation about the world of natural wellness,” Stephanie explains, “so it’s important to start a conversation that you want to have.” Stephanie also reminds that “if something is true for you, it’s probably true for someone else,” so being honest and vulnerable in your podcast is essential in connecting with your listeners.

2. Legit equipment isn’t necessary — but, okay, it helps. Stephanie says while she knows people who record their podcasts perfectly well on their iPhones, there’s something about “setting yourself up in a professional manner” that helps “create a vibe that allows you to speak from an honest place.” You can find affordable mics, headphones and mic stands on Amazon, as well as Skype recording equipment that’ll make you feel like a total podcasting pro (and still leave money in your bank account). Plus, editing programs like Garage Band are perfect for newbies and come free on any Apple computer.

3. Commitmentphobes, think twice. The joy and fulfillment that Stephanie and Elizabeth get from working on That’s So Retrograde just radiates off them — it’s easy to understand why they work so hard on their project. But they do work hard. As Stephanie says, “What you give is what you get back.” They’re in front of the mic every week for at least two and a half hours and this doesn’t include the time spent on pre-show research, outlining, meetings and post-show listening, description writing and thank you notes. “You have to make the time and give it attention,” Stephanie says, though Elizabeth adds, “As seriously as we take our show, the main thing to remember is to have fun.”

4. Get a little help from your friends. The girls suggest enlisting a friend who won’t be on the mic to sit during every show to act as a producer. They’ll help you loosen up prior to recording and can give you immediate feedback while you’re talking, listening for sound quality, awkward pauses or too many “umms.”

5. Just go for it! When it comes to finding helpful podcasting resources, Elizabeth says to “consult with your gut instinct… if you’re being called to do a podcast, you should do it.” Stephanie agrees, reminding that “it’s free, it’s accessible and low stakes,” and that your unique personality and particular style is what will make your podcast special. Elizabeth advises to “just turn on the mic and let it flow,” and that there’s no better way to find your rhythm and voice than by consistently spending time in front of the mic.

6. Realize your weaknesses and then embrace them. Elizabeth says when they first started TSR, she had to “learn how to be confident” in front of the mic. Two years later and “now that’s where I’m the most confident,” she says. “If it feels scary… that’s more reason to try it and squash your fear!” You’ll gain secondary public speaking and conversational skills you can use in other aspects of your life too.

7. Seek professional help. “Outsource the things you’re not strong in,” Elizabeth advises. Stephanie and Elizabeth have someone who edits their podcasts professionally and wouldn’t have it any other way; it’s an investment that makes sense for them. Companies like Podcast Motor and Podcasting Press will edit your audio for you at reasonable prices if you don’t want to invest the time or money into editing software.

8. Networking isn’t just for LinkedIn. There’s a reason the interviews on TSR seem like they’re effortless conversations between friends — it’s because that’s exactly what they are. Stephanie and Elizabeth invite people on “who we are already fans of, who we’ve met in another environment and who we’ve already had genuine interactions with,” Elizabeth explains. So keep an eye out for potential podcast guests at the next networking event, holiday gathering, gallery opening or dinner party you attend.

Have you recently started a podcast? Tweet us a link @BritandCo so we can take a listen!

(Photos via That’s So Retrograde)

Megan Parry
Megan Parry is a lifestyle writer living in Philadelphia where she's making generous use of her library card, obsessively reading friends' natal charts, and learning how to differentiate between "dried apricot" and "juicy apricot" notes in wine.
Home News