The 3 Heartwarming Pride Proposals You Need to See 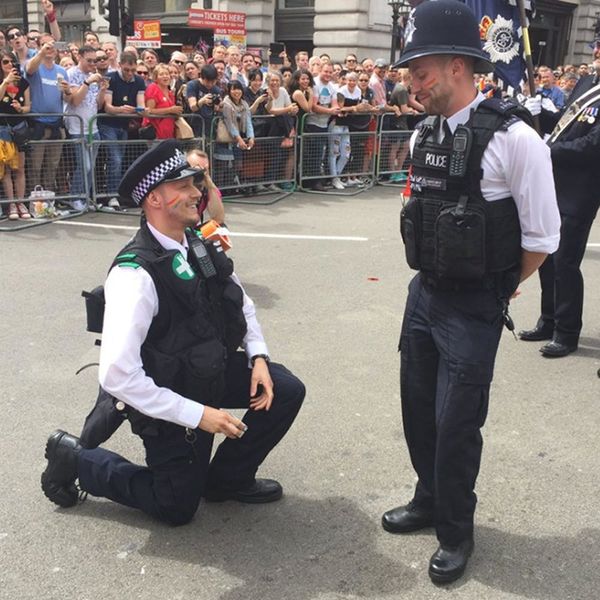 This past weekend, cities all across the country celebrated at pride festivities. There were parties, parades and SO MANY rainbow accessories. And at an event that’s all about love, it only makes sense that a few proposals went down. If you’re suffering from a serious case of the Mondays, take a look at these three heartwarming engagements that happened at various pride events this past weekend.

23-year-old police officer Sam Philpot proposed to his colleague and partner Martin Coughlan during the London Pride parade on Saturday. Sam was not scheduled to work but decided to do so anyway to support the event. The night before he decided it would be the perfect place to pop the question to Martin.

Jonathan and Phil’s engagement also happened at London’s festival. Police officer Phil Adlem was participating in a march in the parade when it suddenly halted and Phil broke away from the pack. He walked over to his partner Jonathan (who was strategically positioned at the front of the crowd with the help of a friend) and proposed in front of the cheering crowd. London’s Mayor Sadiq Khan even took to Twitter to congratulate the couple.

“This parade is monumental for us because of the Orlando shooting. It hit really close to home. We wanted to walk in the parade in honor of the 49 victims. At the same time, I wanted to give Erika something positive to remember from the parade,” said FDNY EMT Julianna Arroyo, from Station 20 in the Bronx, who, along with the help of family members, proposed to now-fiancée FDNY EMT Erika Marrero at today’s #NYCPride March. Congratulations to the happy couple! #OrlandoUnited #Pride2016

This proposal happened stateside at the NYC pride parade on Sunday. Fire Department EMT Julianna Arroyo proposed to fellow FDNY EMT Erika Marrero in the middle of the parade. The NYFD posted the couple’s proposal on their Facebook page alongside the sentiment, “We wanted to walk in the parade in honor of the 49 victims [of Orlando]. At the same time, I wanted to give Erika something positive to remember from the parade.”

Cortney Clift
Cortney is the senior writer and special projects editor at Brit + Co. She typically covers topics related to women's issues, politics, and lifestyle. When she's not buried behind her computer you'll find her exploring New York City or planning her next big adventure.
Engagement
Entertainment
Engagement LGBTQ