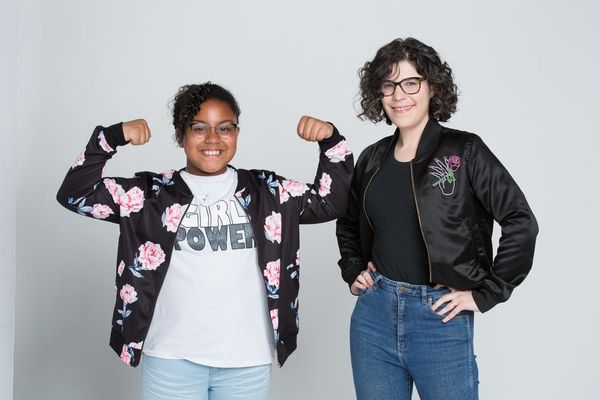 Fans of the Cartoon Network show Steven Universe will likely tell you that each 15-minute episode packs a punch. Although the show is wholesome and family-friendly, animator and screenwriter Rebecca Sugar has been able to pack in some pretty serious discussion around important topics like self-care, friendships, bodies, and boundaries. But it’s the show’s progressive treatment of gender, in particular, that has garnered praise.

As the Cartoon Network’s first gender non-binary show creator, Sugar feels immense pressure to provide viewers of all ages with gender-expansive characters they can look up to.

“LGBTQIA+ kids have not had any positive role models in children’s media until very recently,” Sugar tells us via email, adding that by excluding gender-diverse characters in media, we’ve taught children to exclude these people in the real world.

“This is why the situation is so dire. If we are working to accelerate acceptance, we need to start with children.”

Sugar, a partner with the Dove Self-Esteem Project, recalls struggling with self-esteem and gender identity when they were growing up. Sugar believes that self-esteem education initiatives like Dove’s — which aims “[to help] young people overcome body image issues and fulfill their potential by building positive body confidence and self-esteem” — can help reach LGBTQIA+ kids who are in need. Sugar also observes that, more often than not, queer kids spend their formative years grappling with the feeling that people like them should not exist.

“I feel a huge personal responsibility to help the LGBTQIA+ kids that watch the show feel like they deserve to be visible and for their stories to be heard,” says Sugar.

That sense of responsibility led Sugar to produce a series of shorts for Dove’s campaign: “I want to reach as many kids as possible, especially kids who are usually not included in messages about self-care, and I also really want to reach the friends, classmates, and families of the kids who are struggling, and let them know what they can do to end harmful behavior and provide support.”

Sugar worked alongside psychologists to learn how to best address children’s biggest barriers to self-esteem. They applied those learnings to the three Dove shorts, which are set in the Steven Universe world.

“When it comes to issues of self-esteem, one of the biggest hurdles is just feeling like you deserve the help in the first place,” Sugar explains. “But if a character you relate to deserves the help, then you do too.”

Amanda Scriver
Amanda Scriver is a passionate storyteller and body image advocate based out of Toronto, Canada. When she isn't writing for various publications, she finds time to Keep Up With The Kardashians while partaking in life's greatest pleasure: the chip buffet. Don't ask her what her favorite restaurant is, it's complicated
Every Body
Gender Issues
Every Body LGBTQ
More From Gender Issues