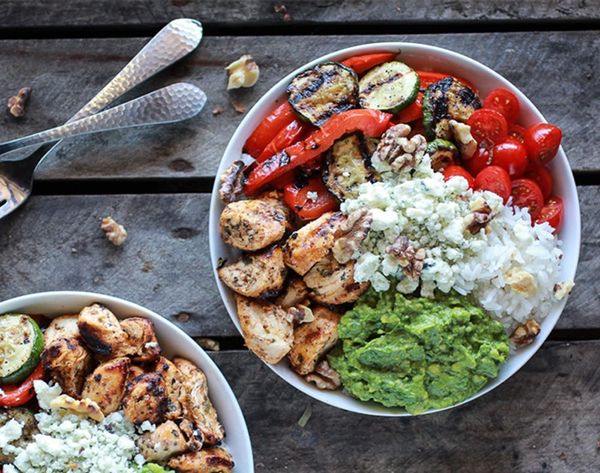 Admit it: There's something comforting about a bowl of rice topped with veggies, meat or even fruit. Plus, having your whole meal in one bowl saves on clean up time, which is totally fine by us. That's why we've found 20 rice bowl recipes that you might just have to add to your arsenal of go-to weeknight dinners. So get out those bowls you DIY-ed, and fill 'em up with some of these yummy, one-dish rice concoctions.

Sometimes simple and traditional is best, which is why this classic chicken and egg dish tops our list. (via Sea Salt with Food)

Add avocado to anything, and it instantly turns into the best thing ever. This dish is fresh eats at its best. (via Half Baked Harvest)

Now you can have the flavors of fish tacos without any of the carbs, thanks to the star of this dish: Cauliflower rice! Who knew? (via Julie’s Eat and Treats)

This dish is perfect if you need a break from a weekend of heavy meals. The dressing is made with a detoxing combo of ginger root, honey, cilantro, garlic, lime juice, olive oil and vinegar. Yum! (via Chelsea’s Messy Apron)

The coconut ginger rice and pineapple combo add a bit of sweetness to this savory, tropical dish. (via One Lovely Life)

No one ever said a rice bowl had to be Asian influenced. Bright Italian flavors make this dish healthy and comforting. (via Cookin’ Canuck)

The tasty romesco sauce made with pimiento peppers and almonds (among other things) really makes this dish stand out. (via The Kitchn)

With Italian sausage and an Asian-inspired sauce, this meal in a bowl makes it easy to bring fusion cuisine into your home kitchen. (via Noble Pig)

Sriracha makes everything better — especially chicken breasts. Add some pineapple, and you’ve got a meal that’s sweet and spicy. (via Spache the Spatula)

Forbidden rice adds a little something extra. Not to mention, it makes the colors of the oranges, avocados and tomatoes pop. (via Half Baked Harvest)

Remember how we said rice bowls were comforting? Well, add some bacon and you’ve hit the mother lode. And there’s spinach in there, too, so it’s healthy. Sorta. (via Iowa Girl Eats)

Pumpkin-infused rice plus pistachios? Never thought we’d be wishing for autumn so soon. ( via Lunchbox Bunch)

Talk about a power lunch! The egg and avocado have all the protein you need to keep you powered up throughout the day. (via Bon Appetit)

The traditional sushi rice in this bowl makes the teriyaki that much tastier. (via Village Harvest Rice)

Skip the tortillas for a lighter twist on steak fajitas. But since you’re skipping the wraps, maybe you can go a little harder on the cheese. (via Super Healthy Kids)

Rice takes a backseat in this dish, because let’s face it, the rice is just a vehicle for soaking up the deliciousness that is this curry. (via The Partial Ingredients)

Summer is all about fresh fruit and fresh seafood, making this a perfect end to those extra long (and hot) days. (via Cooking on the Weekends)

Basically, what we’ve learned here today is that cauliflower is a great substitute if rice (or carbs) isn’t your thing. But just because it’s healthy, doesn’t mean you can’t fry it! (via Brit + Co)

Oh yes, you read that correctly. Curried avocado… aka the best idea ever. (via Half Baked Harvest)

Who says a rice bowl has to be savory? This refreshing take on rice pudding is made in a slow cooker, so you can let it go all day and come home to a sweet and light dessert. (via Food Network)
From Your Site Articles
Related Articles Around the Web
Amanda DiGiondomenico
Amanda is a freelance writer and graphic designer who blogs about living a stylishly nerdy life at The Spendicate. A lifelong resident of Baltimore, MD, Amanda is an art school dropout, who managed to earn a masters degree in nonfiction writing. On the weekends, she's an expert guacamole maker, a novice jogger and an intermediate yogini.
Dinner Recipes
Recipes
Dinner Recipes Food Recipes Roundups Lunch Recipes recipe roundup
The Conversation