The Newest ‘Riverdale’ Season 3 Trailer Has Cults, Hookups, and Archie Behind Bars 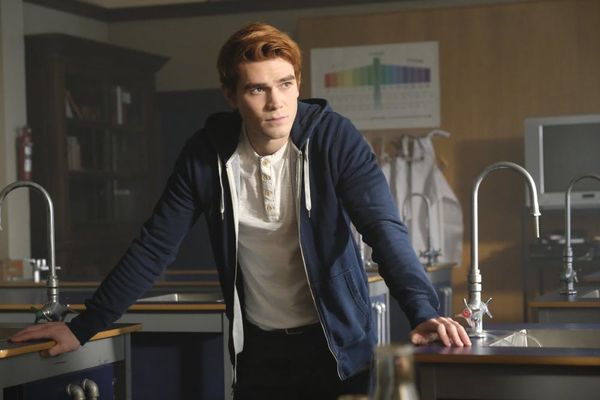 The CW just dropped a brand-new look at season 3 of Riverdale, and reader, it’s a doozy. The Comic-Con trailer that debuted back in June hinted at some of the drama we can expect in upcoming episodes, but this new teaser kicks it up at least 10 notches. We were not ready.

Do what it takes to survive. New episodes of #Riverdale return Wednesday, October 10 on The CW! pic.twitter.com/nrPmpCDKVw

Season 2 ended with Archie (KJ Apa) being framed and arrested for the murder of Cassidy Bullock (Harrison MacDonald), and it looks like season 3 will see him actually serve time behind bars. The new trailer shows Archie in handcuffs on a moving vehicle, walking down a prison hallway with a few guards, dodging a beatdown in the yard, and then throwing a bottle through the bars of a prison cell.

We also see Jughead (Cole Sprouse) on the case of something suspicious, and Betty (Lili Reinhart) falling to the ground as a creepy figure in an elaborate costume looms over her. There’s are also shots of demonic sketches and some kind of cult-like ritual involving Polly’s twin babies.

Meanwhile, Veronica (Camila Mendes) stands up to her father, Hiram Lodge (Mark Consuelos), telling him, “We will survive anything that you have planned, because we are endgame.”

The rest of the crew is in there, too — there are brief flashes of Archie’s dad Fred (Luke Perry), Cheryl Blossom (Madelaine Petsch), Kevin Keller (Casey Cott), and Betty’s mother Alice (Mädchen Amick).

Riverdale season 3 premieres on The CW on Wednesday, October 10, at 8pm ET.

What are you hoping to see in the upcoming season of Riverdale? Tell us @BritandCo!