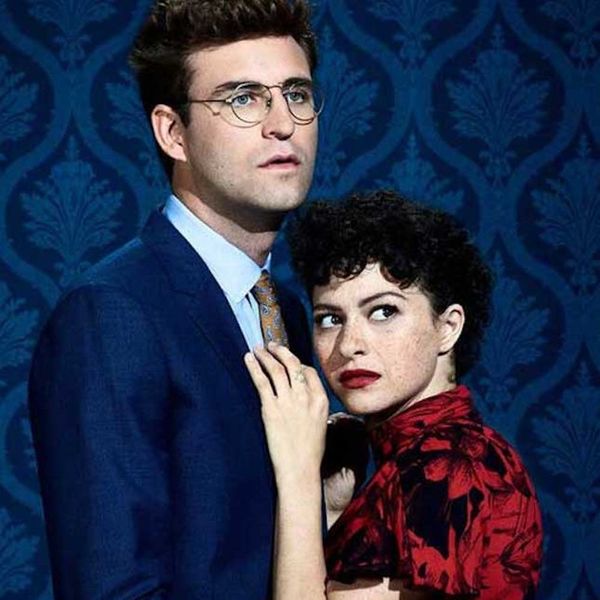 Search Party capped off a great sophomore season with a terrific finale. The first episode of the hour, “Frenzy,” was okay, but the second episode, “Psychosis,” was stellar, leaving us with a cliffhanger question going into (hopefully) season three — who ratted out Dory?

But let’s back up. In the first half hour, the gang talks to April, who wants $60,000 to keep quiet about overhearing Drew and Dory fight about having killed Keith or she’s going to the cops. The foursome makes an effort to steal April’s recording of the fight by having Portia and Elliott follow April while Dory and Drew search her apartment.

But it turns out April is an identical twin and Portia and Elliott are following the wrong one. When April finds Drew and Dory in her apartment, the blackmail jumps to $100,000 and they have one night to get her the money.

Enter Deus Ex Buttpic. You know how pointless the Julian storyline has seemed, with the harassing senatorial candidate and all that? Well, Dory sees the butt pic as a way to pay blackmail that she doesn’t have. When she meets April on the Staten Island Ferry, she offers the pic to April in lieu of actual money. April rightly yells at her, because seriously, what is April going to do with a butt pic that is allegedly from a senator?

Dory finally snaps and just upends April over the ferry railing and into the icy waters of the Hudson River.

Meanwhile, Detective Joy follows Fat Frankie to a church. She doesn’t witness him doing anything that suspicious, but he manages to startle her and she freaks out and shoots him dead. Uh oh.

Joy has to make the shooting look justified, so she takes Frankie’s gun out and shoots herself in the arm with it.

At this point, all of Dory’s problems are seemingly solved. You know Joy can’t keep pursuing this Keith thing because she wants to keep people from examining what happened with Fat Frankie too closely. So the gang should be in the clear.

But that’s not the case at all. Even though Joy has to lie to Internal Affairs in a sworn statement, she still talks to Chantal about what really happened to her, and Chantal confesses that she wasn’t in New Hampshire, she was in Montreal. So Joy knows that it had to be one of these guys who killed Keith.

As this is happening, the foursome is breaking up. Portia and Elliott are terrified they’re going to jail, so they tell Dory to handle her own problems and then they both hook up with their respective significant others. Elliott goes so far as to propose to Marc in a grocery store because he can never do anything halfway, while Portia sleeps with her director, who won’t let her kiss him.

Oh, and Drew gets caught sabotaging Alan at work, so he gets fired.

At episode’s end, the cops come for Dory because they got an anonymous tip that she killed Keith Powell. So first off, will Joy let this play out, or will she try to put the kibosh on the investigation because it keeps the heat on her and the Frankie shooting?

And secondly, who dimed Dory out? It doesn’t feel like Drew since the two of them hooked up and exchanged “I love yous.” But maybe that’s why it is him, because it seems like it can’t be him.

But honestly, this seems like a total Elliott move — sacrifice Dory to save yourself. But it would be much more interesting if it were someone else entirely. Fingers crossed that the show gets renewed so we can find out.

April has a twin in real life — Phoebe Tyers plays April, and her twin, June, was played by Clarie Tyers.

Portia: “Why are you doing this to us?”

April: “Because I don’t like how you guys carry yourselves… and I don’t think you should kill people.”

Drew: “I hate this! I’m halfway to thinking we should just kill April!”

Portia: “Babe, I’m sorry, but you’re acting delusional. I lay awake at night thinking about how our lives are going to be taken away from us because Dory wanted to feel special. It’s so selfish and it’s so pathetic.”