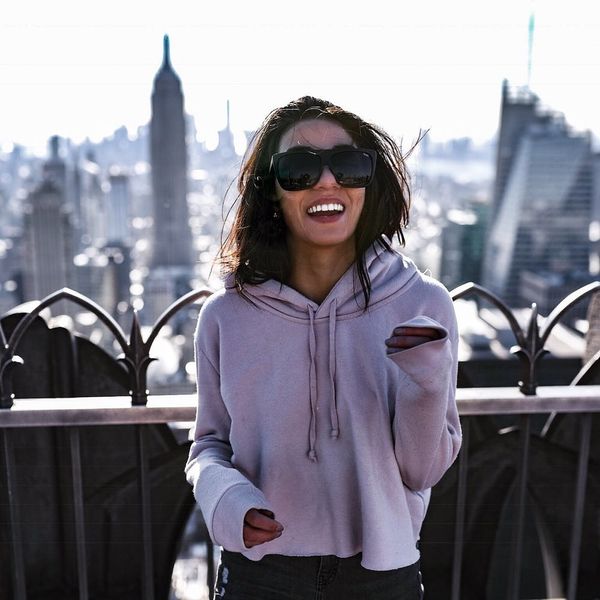 We’re proud to celebrate #MuslimWomensDay 2018 and hear Muslim women talk about the issues that impact them.

When Shazia Ijaz noticed a gap in the fashion market for streetwear apparel that speaks to millennial Muslim women, the Pakistani-American designer decided to take matters into her own hands. This February, Ijaz launched Seek Refuge, the world’s first streetwear brand for Muslim women.

With Seek Refuge, Ijaz aims to dismantle the stereotypes that surround Muslim women by offering edgy and attractive pieces that celebrate and honor their spiritual journeys.

“The woman I created this brand for is educated, badass, and socially aware. She is a stylish millennial in her twenties living in a metropolitan city, and she is very open to experiences as well as different cultures. She is not your typical image of a Muslim woman. Maybe she wears a hijab, maybe she doesn’t,” Ijaz says.

Ijaz explains that the world tends to see a “sorrowful, completely covered woman” when they think of Muslim women. She wants to shift that image by offering modern, fashion-forward representations that merge modesty with a tomboyish, casual appeal.

Despite the clarity of her vision, her path to fashion entrepreneurship wasn’t exactly typical. Ijaz doesn’t have a design background, though a stint working at the online fashion marketplace Poshmark helped to shape her fashion sensibility. But it took a horseback riding accident in 2015, which made it physically impossible for her to work a nine-to-five job, that prompted Ijaz to create a business that would allow her to take control of her schedule.

Eventually, she was admitted to a fashion accelerator that gave her the tools to help her launch her own brand. Today, she designs all the clothes for Seek Refuge, from the graphics to the stitching.

The brand launched its first collection in February through an Indiegogo fundraising campaign and features three pieces laden with culturally resonant symbolism: the No Nazr hoodie, the Search for You tee, and the Refuge jacket. The Refuge jacket, which comes in oversized denim, is the brand’s flagship piece and features a poem printed in Arabic calligraphy on its back. Ijaz says this garment is emblematic of the brand because the text is written by a Syrian refugee and contains the words “seek refuge,” a phrase frequently repeated in the Koran and the brand’s namesake.

The words are more than a Koranic reference; they’re a business model. The daughter of two community activists who once helped free refugees from detention centers in Thailand before helping them resettle in the United States, Ijaz explains that it was important for her to build a socially responsible business that donates portions of its proceeds to refugee causes and produces its fashions ethically; she’s proud to say that her manufacturer uses fair labor practices and employs resettled refugees in its facility in Istanbul, Turkey.

“We are trying to change the narrative in the fashion industry by showing that the products we offer are in alignment with our brand mission. This commitment is reflected in our supply chain,” she says.

Her upbringing also played a major role in her outlook: Ijaz was born in Dearborn, Michigan — home to the largest Muslim population in the US — and grew up close to her religious community. Growing up, she spent every weekend in the mosque.

Ijaz explains that as part of a minority Muslim sect called Ahmadi, her community faces a lot of persecution, which leads to destruction and displacement. Despite these hardships, her roots continue to keep her grounded, guiding her path.

“We take care of our fellow humans,” she says. “This is a core part of our belief. If you don’t have a lot, share with others. This is something we take to heart.”

Though she had Muslim women in mind when creating the brand, Ijaz says her clothes are intended for use by women across all cultures and religions. Her only caveat is that wearers learn and understand the symbols and scriptural references within each piece before wearing.

“This way,” she says, “it can be shared in a way that doesn’t appropriate culture, but truly appreciates it.”

Tell us what you think of the line on Twitter.

Ruby Veridiano
Ruby Veridiano is a fashion changemaker. She is a writer, fashion correspondent and speaker whose work focuses on connecting the dots between women's empowerment and socially-conscious fashion, as well as promoting diversity & inclusion in the fashion industry. She is from California and now living in Paris, sharing her ‘glamour for good’ approach to life & style. @RubyVeridiano
Inclusivity
Diversity
Inclusivity
More From Diversity