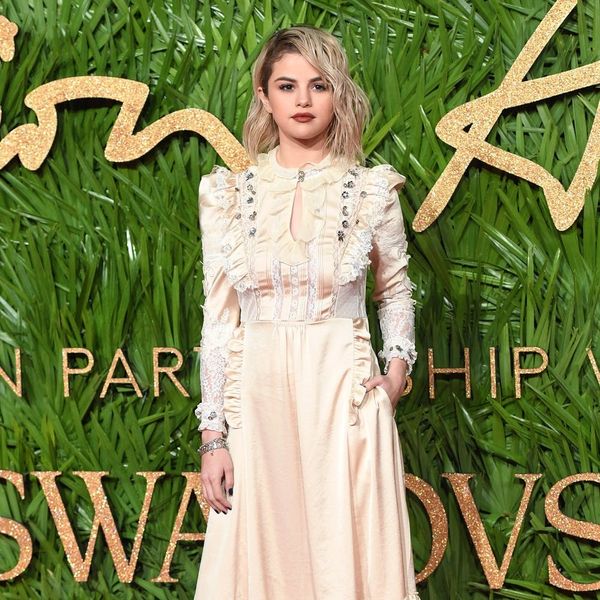 Selena Gomez, the reigning queen of celebrity breakup style, has come a long way from her Wizards of Waverly Place days. Between a stint with The Weeknd and an on-again, now off-again relationship with Justin Bieber, the “Wolves” singer, 25, has seemingly upped the fashion ante with each outing. When she’s not serving as the brand ambassador for Coach, trust that Gomez is owning the red carpet in a head-turning gown or serving up major cool girl inspo on the streets. Ahead, we’re recounting 19 of the platinum blonde starlet’s most transformative style moments to date.

1. Selena Goes Punk: For the launch of her Coach x Selena Gomez collab, the bombshell babe went punk with icy blonde tresses, a sheer shirtdress, and heavy-duty stompers. Your loss, The Weeknd. That’s all we’re sayin’. (Photo via Darren Gerrish/Getty Images for Coach)

2. Ice Princess: Slayyy. Once again in Coach, her cream-hued Victorian-inspired gown and white boots caused a fashion frenzy on the red carpet. (Photo via Karwai Tang/WireImage)

3. Dino-Chic: THAT T-Rex sweater. Only Gomez could make a mid-morning coffee run look this chic and non-fussy. Ahem, we’re calling dibs on those frayed-hem jeans. (Photo via JB Lacroix/GC Images)

4. FROW-Ready: You could say being a brand ambassador for the legacy brand has its perks. FROW-ready status aside, it’s her dope styling of a leather moto jacket and ultra-glam western-inspired booties (eep!) that’s making us weak in the knees. (Photo via Jamie McCarthy/Getty Images)

6. DGAF ‘Tude: Outside the Kiss Radio Station in London, Gomez makes a red haute entrance in a dark floral midi dress and suede pumps. Matrix-worthy shades to go with for a subversive edge. (Photo via Palace Less / Barcroft Media via Getty Images)

7. Met Gala Queen: Gomez exhibited major sartorial prowess at the 2016 Met Gala for its “Manus x Machina: Fashion in an Age of Technology” theme by rocking it out in a studded Louis Vuitton gown, a leather bralette, and lace-up combat boots. (Photo via Larry Busacca/Getty Images)

8. Cool Girl Lewk: It’s her trying, but not trying too hard approach to everyday style that’s worth noting. C’mon, she even makes cropped jeans and a femme polka dot blouse look like a runway style. (Photo via Robert Kamau/GC Images)

9. Orange Perfection: For the premiere of 13 Reasons Why, Gomez — an executive producer of the wildly popular Netflix series — hits the mark in a strapless orange Oscar de la Renta frock and matching drop earrings. (Photo via Jon Kopaloff/FilmMagic)

10. Old Hollywood Glamour: Pinch us, please. If this über grown-up pale blue gingham co-ord doesn’t set your heart aflutter, then we don’t know what will. (Photo via JB Lacroix/WireImage)

12. Girl-on-the-Go: Poised and polished is the name of the game. Here she effortlessly styles a retro-print dress alongside slip-on sneakers, the Selena Grace Coach bag, and a bold red lip for good measure. (Photo via Gotham/GC Images)

13. Rebel With a Cause: If you’ve got it, flaunt it. She attended the Billboard Women In Music Awards — and accepted the award for Woman of the Year, no less — by donning a racy bustier and cutout leather pants. (Photo via Axelle/Bauer-Griffin/FilmMagic)

14. Sleek Selena: Biebs, you’re missing out. The style MVP keeps it simple in a bada-boom-worthy LBD and sultry makeup. (Photo via Steve Granitz/WireImage)

15. Fête-Worthy: Another day, another fashion gala. Gomez knocks it out of the park with a sheer Rodarte gown that, dare we say it, is practically fit for a princess. (Photo via Mike Pont/WireImage)

16. Fierce in Orange: You. Go. Girl. Just a little reminder that confidence is always your #1 accessory. A wavy blowout goes a long way too. (Photo via Slaven Vlasic/Getty Images)

17. Avant-Garde: With fashion’s biggest night of the year fast-approaching, we couldn’t not throw it back to Gomez’s 2017 Met Gala look. Though accompanied by then beau, The Weeknd, it’s her unabashedly feminine custom Coach gown that got everyone talking. (Photo via John Shearer/Getty Images)

18. Pajama Dressing: BRB, just heading out in some navy PJs and heels for a lazy girl-approved look that doesn’t look lazy at all. (Photo via Marc Piasecki/GC Images)

19. IRL Cinderella Moment: Entrance like “whoa” is right. As if we could forget the showstopping scarlet red Prada ball gown that Gomez rocked for the 2016 AMAs. Her simple pulled-back pony was the perfect finishing touch. (Photo via Steve Granitz/WireImage)