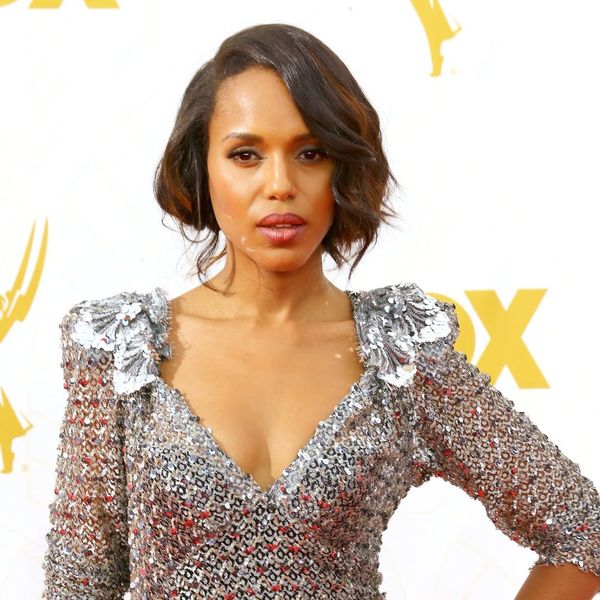 Last night’s Emmys 2015 was a must-watch. Viola Davis made history by being the first black woman to win Outstanding Lead Actress in a Drama for her role as Annalise Keating in Shonda Rhimes‘ How to Get Away With Murder and gave the most epic speech (which elicited a standing ovation). And host Andy Samberg gave out a real HBO Now account and password.

1. Julie Bowen: The Modern Family star’s smokey eye and black gown with green accessories were lovely, but it was her iconic lob styled with lots of texture and a deep side part that stole the show. (Photo via Jason Merritt/Getty)

3. Chelsea Peretti: The Brooklyn Nine-Nine funny woman showed up in a gorgeous cherry blossom-embellished gown that was sheer in all the right places and loose, romantic waves for her lob. (Photo via Alberto E. Rodridguez/Getty)

4. Jenna Fischer: Our fave The Office alum didn’t walk the arrivals red carpet, but she did make an appearance at the official HBO after party. Jenna sported a voluminous, shoulder-grazing coif. (Photo via Jason Kempin/Getty)

5. Zoe Kazan: The actress turned heads with her graphic red + white gown and rhinestone bib necklace — but it was her strawberry blonde lob that perfectly set off her outfit. She paired her beauty look with a bright red lip and pale smokey eye. (Photo via Jason Merritt/Getty)

6. Amy Poehler: Amy Poehler’s chill red carpet hair is so DIYable. While your hair is still damp, just work some mousse into it, tie into a loose bun and let it dry. When you let it down, you’ll have easy waves. (Photo via Alberto E. Rodriguez)

7. Carice van Houten: The Game of Thrones star was barely recognizable last night when she ditched Melisandre’s signature waist-long red locks for a trendy, curled lob. But, like her character, you can tell Carice always has a streak of fieriness in her: the red lip + polish and bubblegum-pink dress is a bold choice. (Photo via Alberto E. Rodriguez)

8. January Jones: The Mad Men alum’s emerald green jumper was a scene-stealer last night, but it was offset by her relaxed wheat-blonde lob. Casually tucked behind one ear and rockin’ a super subtle wave, January’s tresses are the epitome of low maintenance. Time to call your hairstylist. (Photo via Jason Merritt/Getty)

9. Taraji P. Henson: Nominated for Outstanding Lead Actress in a Drama for her role as Cookie in Empire, Taraji’s look last night definitely brought the drama. She rocked a sleek graduated lob with a center part. It was smoldering. (Photo via Jason Merritt/Getty)

10. Aubrey Plaza: Aubrey Plaza also sported a no-frills lob, but paired it with some adorable side-swept bangs. Her look is definitely more day-to-day compared to Taraji’s, but still lovely — or should we say, lob-ely? Sorry, we had to. (Photo via Jason Merrit/Getty)

12. Elizabeth Moss: The other Mad Men alum to make this list, Elizabeth Moss wore her hair pinned back on one side and in big, voluminous curls. It’s classic old Hollywood. (Photo via Jason Merritt/Getty)

13. Taylor Schilling: The Orange Is the New Black star wore a show-stopping yellow number and her hair in a ’20s flapper-appropriate lob. The end result of her look? Glam, yet fun. (Photo via Jason Merritt/Getty)

14. Kerry Washington: Lob queen and Scandal star Kerry Washington decided to switch up her look by pinning up a part of her iconic mane. DIY this chic updo for a wedding or maybe date night. All you need to do is curl, pin and spray. (Photo via Mark Davis)

What do you think of these celebrities’ lobs? Will you be getting the look? Tell us in the comments below!

Kimberly Wang
Kimberly Wang writes about all things pop culture, tech, style, and beauty. She's a Bay Area transplant and has an MFA in Creative Writing from Columbia University. On a sunny New York day, you can find her hanging out with her mini schnauzer Isabelle Jellybean on a blanket in Central Park.
Haircuts
Hair
Haircuts Lob Hairstyle Short Hair