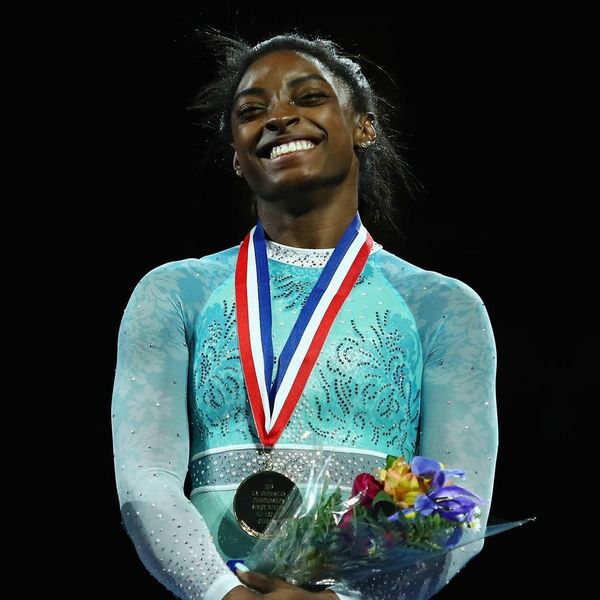 Olympic gold medal winner Simone Biles made history at the US Gymnastics Championships in Boston on Sunday, winning her fifth title at the event and becoming the first woman in 24 years to be awarded the top score in every single event at a national championship.

“[The color] is for the survivors,” Biles reportedly said, according to the Associated Press. “I stand with all of them and I think it’s kind of special to unite (people).”

Biles told the Associated Press that she’s been planning her uniform for eight months as a way to honor and support other victims of sexual abuse while sending a direct message to USA Gymnastics, which continues to be criticized for its lack of support of survivors.

Biles admitted earlier this year that she was one of a number of her Team USA teammates to endure sexual abuse by disgraced team doctor Larry Nassar.

Biles has been openly critical of USA Gymnastics’ treatment of victims and the organization’s silence on Nassar. Biles’ former teammate and fellow survivor Aly Raisman has also been critical of the organization and has filed a lawsuit against the national athletic governing body, along with a suit against the US Olympic Committee for their failure to protect athletes. McKayla Maroney, another Team USA athlete, is also currently suing USA Gymnastics for covering up her abuse.

Throughout Nassar’s 2018 trial, we learned that the former team doctor was essentially given free reign by USA Gymnastics to give the sporting body’s young female athletes what he deemed necessary “medical procedures” for more than a decade. More than 160 athletes have since come forward to report abuse that occurred during this time.

Shortly before Biles’ winning routine, USA Gymnastics president Kerry Perry avoided journalist’s questions about the repercussions of Nassar’s case and the findings that USA Gymnastics failed to act, simply saying that she expects survivors and the organization to be able to stand “side by side” in the future.