Need a New Fancy ‘Do? Try One of These 9 Low Updos 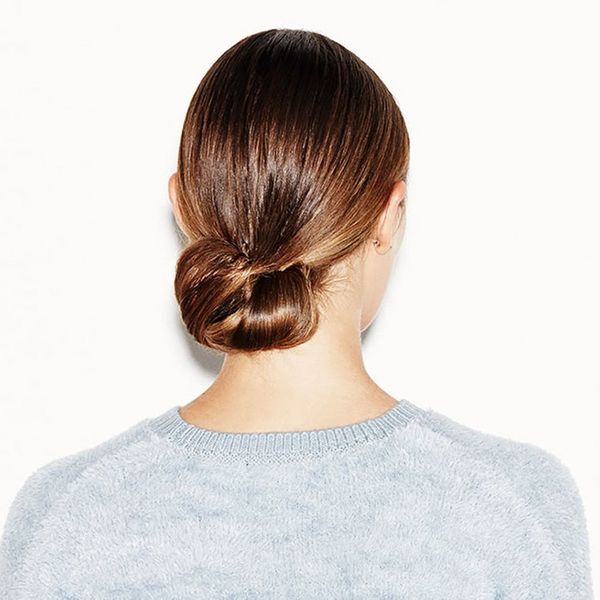 Just because you put your hair in an updo doesn’t mean those tresses have to touch the stratosphere. Take these nine styles for instance: There’s nothing “up” about them, and yet they’re still as elegant as ever settled at the nape of your neck. Slicked back into a bun or sleekly collected into a modern pony, your tresses will be set for the holidays — or really for any event where messy hair won’t cut it — in these low updos. Here’s how to DIY these simple but stunning duster ‘dos:

1. Rolled Updo: Flip your pony over and over to achieve this streamlined updo that you can roll up in under a minute and secure with just one bobby pin. A go-to for when you have to rush to dinner with the fam straight off the plane. (via Lulu*s)

2. Waterfall Braided Bun: Sneak a romantic braid into your low updo with this waterfall bun that cascades from the top of your head down into a perfectly tamed roll. We’re calling it a must-try winter date night look. (via Oh the Lovely Things)

3. Rolled Low Bun: Balance sophistication with carefree cool in this chignon that twists a split-in-two pony into a next-level low bun. It’s a look that will turn heads in both an oversized sweater and a sleek party dress. (via Byrdie)

4. Low Fishtail Braid: Restyle a traditional fishtail braid by twisting up the plait into a tight side knot. Whether you leave your bangs hanging loose or slick them back with a wax, this is a flirty look made for an NYE bash. (via Twist Me Pretty)

5. Low Hair Knot: The most fuss-free updo of all — a tightly twisted and pinned low bun — is a total stunner, especially since there are zero hair ties to distract from its shape. Try this one when you’ve stepped out of the shower with just five minutes to spare on your hair. (via Refinery29)

6. Loosely Clasped Pony: This ultimate lazy girl updo is merely cinched back with a piece of wow-worthy hardware — in 2015, the more minimal, the better. Dress up the look by paying attention to your part: a dramatic side part is always a good idea. (via Hárid.is)

7. Twisted Upside Down Pony: This whimsical take on a rope braid upturns the tips of your tightly twisted strands, giving the low pony an unexpected topsy turvy feel. Consider this posh updo a reason to actually pay attention to those split ends. (via A Note on Style)

8. Low Chignon Twist: Twisted back tresses form a sculptural low bun that dips down at the neck in a dreamy knot. We can’t think of a prettier way to make our hair stand out under a winter hat. (via Popsugar)

9. French Twist Low Pony: While it’s not the easiest look to DIY, it’s still the one to try to master on those snowed-in days. The sleek twist is the definition of modern elegance, so at least make that vibe your 2015 hair muse. (via Elle UK)

What low updos are you wearing? Tell us about your go-to winter hairstyles in the comments below.