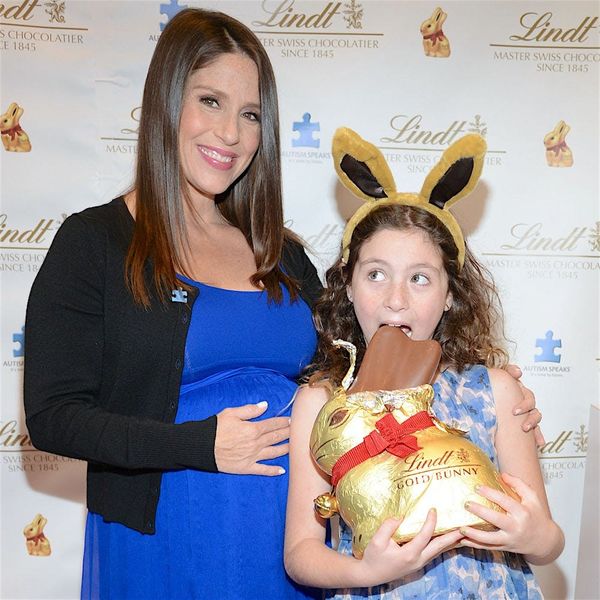 Soleil Moon Frye recently teamed up with Lindt — yes, makers of those delicious chocolate truffles — for the chocolate co’s seventh Gold Bunny Celebrity Auction. Until March 20, you can bid on porcelain versions of the Lindt Gold Bunny that have been autographed by Soleil and other celebs, and 100 percent of the proceeds go directly to Autism Speaks. When she’s not furthering a wonderful cause, the actress is at home with her family — and she has a fourth on the way! We caught up with Soleil on all the inspo behind her children’s creative baby names (and even hear her daughter’s baby name suggestion!), what’s on her Netflix queue and her pregnancy secret weapon.

“I’d say most of my time is spent with my family and my kids,” Soleil tells us. “We love to cook. We love cooking that feast and having that family time together and time to connect and talk. We love creativity and crafting and all those fun things. Whenever I get the opportunity, one of my favorite, favorite things to do is just to go and see a movie. When my husband’s in town, whether that’s curling up and watching a movie or binge-watching Netflix or going and seeing a film, that is one of my favorite things to do.” Yep, that sounds pretty darn relaxing.

What’s in her Netflix queue, you ask? She has a ready answer. “Making a Murderer, I did binge watch that,” she says with a laugh. “It’s a really nice cross between that when I have grown-up time and then I’ve been watching every episode of Popples.” Soleil’s eight-year-old daughter is in the room with us, so Soleil asks her to jog her memory, and Jagger is happy to comply. “A couple weeks ago, she had the flu and we stayed in bed and we watched all these movies together,” Soleil says, “We watched Her Named Me Malala and Gem and the Holograms.”

Soleil and her husband, writer and producer Jason Goldberg, wed in 1998 and have since had three adorable kiddies: Lyric, Jagger and Poet. We asked the Robot Chicken alum where the inspiration behind each of the names came from. “Poet was a name that came to us really early on and it just kept coming back over and over. Her middle name is Sienna Rose and we had been in a cathedral in Sienna and had [made] a wish to have a beautiful, healthy baby and got pregnant soon after. Rose was both of our grandparents’ names,” Soleil says.

As for eight-year-old Jagger? “Jagger was the strongest little baby in my belly ever,” says Soleil, to which Jagger interjects, “You thought I was a boy.” Her mom replies, “I didn’t know, but she would punch and kick like crazy. She was so strong. Jagger just felt like a very strong name for a girl or a boy. Blue was one of our favorite names so we had to add it to that, and Joseph was my goddad who passed away. So she has her amazing name.” (“Jagger Joseph Blue Goldberg,” Jagger chimes in the background.)

“Lyric is actually Lyric Sonny Roads and we call him Roadie. We kept seeing these signs everywhere we went that said ‘Lyric’ all throughout the pregnancy. We’d say, ‘What should the baby be named?’ and we’d come up on a street sign and it’d say ‘Lyric.’ Roads, we loved the name Roads and so we call him Roadie,” Soleil tells us. “That’s really his nickname, that’s what his dad calls him and that’s what we all call him all the time. Our little Roadie.” She then points to her belly, “And now this baby, I don’t know what we’re going to name it. I need to figure it out! But we all have really different names, so for us it’s kind of the norm to come up with really fun, crazy ideas.” She laughs again and says, “Maybe we should just go with a really traditional name instead. It’s just too much fun.” As for Jagger, she definitely has an opinion on what her new sibling should be named. “You need to name it a music name. Name it Music, cuz we all have Music names,” Jaggers tells her mom. “We’ll see,” is her mom’s cryptic response.

We also get the actress to dish on her pregnancy secret weapons. “Lots of water,” she says, “And it’s been a lot of Egyptian Magic Skin Cream ($39) on my belly. I’ve been putting Egyptian Magic everywhere — my face, my eyes, my body. It’s like this amazing, amazing jar of yumminess. It really goes all over my body. I’ve been using a lot of Aquaphor ($5) on my mouth. I’m like, ‘Oh, the baby needs some on his tush and I’ll put some over here and there.’ We go through tubs of it. Aquaphor and Eqyptian Magic. Anything hydrating.” And while this is her fourth pregnancy and she’s definitely knows what’s up, Soleil is always open to getting tips from other moms too.

“I’d love some tips if anybody has some, because I just feel like I’m constant a mess, clumsy and falling over,” she jokes. Don’t worry, Soleil, we ALLLL relate.

Will you be trying out Soleil’s secret weapon? Tweet us @BritandCo!

Kimberly Wang
Kimberly Wang writes about all things pop culture, tech, style, and beauty. She's a Bay Area transplant and has an MFA in Creative Writing from Columbia University. On a sunny New York day, you can find her hanging out with her mini schnauzer Isabelle Jellybean on a blanket in Central Park.
interview
Baby Names
interview
More From Baby Names