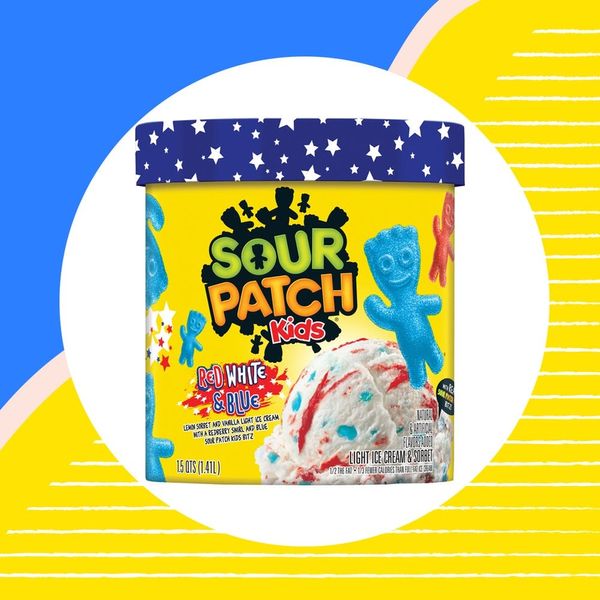 Since so many ‘90s snack foods we were obsessed with are officially back (Go-Gurt anyone?), Sour Patch Kids is giving you TWO reasons to hit the frozen treats aisle this summer with new ice cream and ice pops, and we’ve got all the details. Even though your days of enjoying a frozen treat in the sandbox with your pals are likely long gone, it’s totally fine to reminisce about your favorite childhood snacks in this way.

You might remember back in 2016 when Baskin-Robbins released a limited-edition Sour Patch Kids ice cream. Now, Walmart has teamed up with the sour-sweet candy company to create a Sour Patch Kids Red, White and Blue ice cream ($4). The flavor’s a mix of vanilla ice cream and lemon sorbet with a tart raspberry swirl and chunks of real blue raspberry Sour Patch Kids. It’s available exclusively at Walmart stores nationwide through the end of 2018.

If you prefer popsicles, fear not: You can also try Sour Patch Kids Flavored Ice Pops ($3-4 for 12), which come in five flavors inspired by the beloved chewies, including orange, lemon, lime, blue raspberry, and redberry. According to Jerry Law, J&J Snack Foods senior vice president, the brand wanted to capitalize on everyone’s love for nostalgia-tinged sweets, saying, “What makes this product shine is the sour swirl we infused into a sweet, frozen base, giving Sour Patch Kids candy fans the perfect ‘sour then sweet’ flavor profile.” Sour Patch Kids Flavored Ice Pops will be available in retail and club stores throughout the U.S. and Canada starting in the spring, so keep your eyes peeled, candy lovers.

Are you excited to try the new frozen Sour Patch Kids treats? Let us know @BritandCo!

Arielle Tschinkel
Arielle Tschinkel is a pop culture junkie who went to NYU because the Olsen twins went to NYU (really). She is a freelance writer whose work has also been featured on HelloGiggles, Refinery29, SheKnows, Bustle, Hollywood.com, and many others; and she's living her dream one Britney Spears GIF at a time. Follow her on Twitter @mrstschinkel or visit her website at arielletschinkel.com.
Grocery Shopping
Food News
Grocery Shopping Ice Cream New Food Alert Sweets
The Conversation