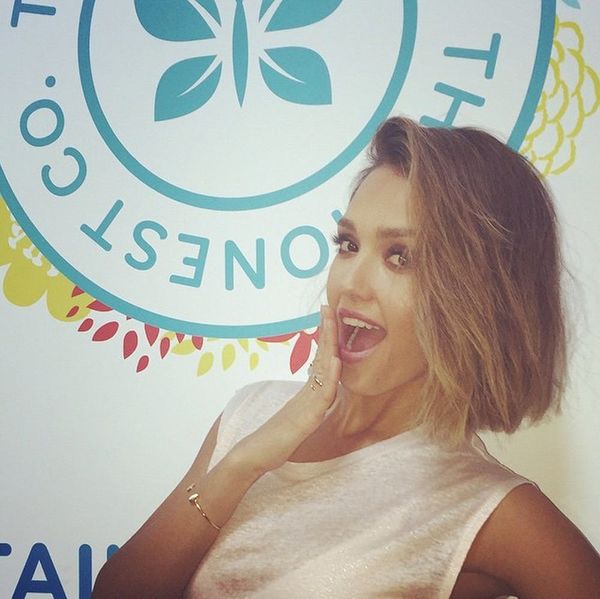 As 2014 began to wrap up, the medium haircut took Hollywood by storm. Shoulder length with minimal layering, the style showed up on everyone from Olivia Palermo to Selena Gomez. A week rarely went by when we didn’t see a new star debuting freshly cut, medium length locks on Instagram. Now, as we move into the second season of 2015 we’re starting to see a new trend emerge. Similar to the lob, but slightly shorter, we’re calling the BB (blunt bob) the latest haircut that’s about to rule the world. If you’re in the market for a new spring ‘do, look to these celebs who are already rocking the sweet style for a little bit of inspiration.

1. Jessica Alba: The latest celeb to hop on the BB train, Jessica Alba debuted freshly cut locks on Instagram over the weekend along with the caption, “Uh oh someone chopped off her hair!” We’re digging those beachy waves and exaggerated side part. (Photo via @jessicaalba)

2. Vanessa Hudgens: Vanessa has been slowly shortening her trademark, long locks since early last year. The actress took to Instagram last week to share her shortest ‘do yet. Coining the term BB, she wrote, “Who needs a lob when you can have a bb (blunt bob)!!” Touché, Vanessa. (Photo via @vanessahudgens)

3. Kristen Wiig: Funny lady Kristen Wiig first showed off a stylish shorter cut at this year’s Golden Globes. Her cut then (left) doesn’t have much of an angle or many layers. Her most recent cut (right) is slightly shorter and almost a borderline, grown-out pixie. If you’re unsure about chopping off your hair, her newest look might be a slightly scary option as there isn’t really a way to hide it if you’re not a fan. Her longer version of the blunt style could be just what your spring look needs. (Photo via Jason Merritt/Kevin Winter/Getty)

5. Rosamund Pike: Angled and super sleek, this red carpet maven’s hair looks just like a classic bob until you take a look at what lies underneath. At this year’s Oscars Rosamund swept her hair back into a bun to reveal that the bottom of her hair is actually an undercut. We’re all for a little bit of edge. (Photo via Jason Merritt/Getty)

6. Alexa Chung: Queen of the medium cut, this style maven kicked off the BB trend back in December when she debuted a shorter version of her trademark style. Judging by her caption, which said, “@georgenorthwood [her stylist]. I won’t cry into my granola this time,” we’re guessing she’s a fan of her above-the-shoulder chop. (Photo via @chungalexa)

7. Emma Stone: If you’re looking for a little bit of bang action, take a hint from Emma Stone’s texture style, which features long, side swept bangs. (Photo via Jason Merritt/Getty)

8. Felicity Jones: If that isn’t quite the fringe you’re looking for, take it a step further and go for Felicity Jones’ adorable windswept style, complete with blunt bangs and a whole lot of volume. (Photo via Ian Gavan/Getty)

9. Lauren Conrad: Last, but certainly not least, who can forget about the haircut that started it all? LC traded her famously long locks for a lob late last year and then decided to take it a step further with this extra flirty ‘do. Obviously her look just wouldn’t be complete with some perfectly Californian beach waves. (Photo via Dave Kotinsky/Getty)

Is there a celeb rocking a gorgeous BB cut that we missed? Share with us in the comments below!