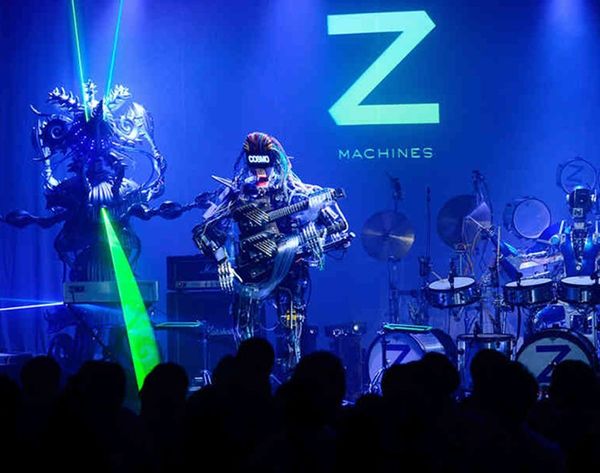 Guys, we’re getting the band back together. Well, not back together. We’re building the band. Literally. From robots. Okay, we can’t take credit for this musical machine masterpiece — Tom Jekinson aka DJ Squarepusher, collaborated with Japanese robot band Z-Machines for a five-song EP called Music for Robots. How cool is that idea? Really cool, as this behind-the-scenes video of how it all came together reveals. It seriously made us look, listen, then bang our heads. Watch below and make sure you have the lighter app downloaded and ready to blaze.

It’s like Making the Band – O-Town + BattleBots. And while this band’s lead guitarist is no Ashley Parker Angel, we’re still pretty impressed by the shredding going on in that video. If you’re worried about your own symphonic skills in comparison maybe it’s time to start practicing. And just remember, there is still something that robots can’t beat us at: ping-pong.

Happy Friday! What video had you saying WHAT?! this week? Share it with US below!

Lisa Raphael
In her past professional lives, Lisa has served the masses as the Editorial Director at Brit + Co, Bieber Whisperer at J-14, Golden Girls Fan Club Prez at Lifetime and Talk Show Host Understudy to Katie Couric. Now, she's taking on the sports world at The Relish, teaching Hairography 101 in her spare time and will forever be trying to fill the hole Zayn Malik left in her heart.
Posts that contain video
Tech
Posts that contain video
More From Tech