10 of the Craziest Foods from This Year’s State Fairs 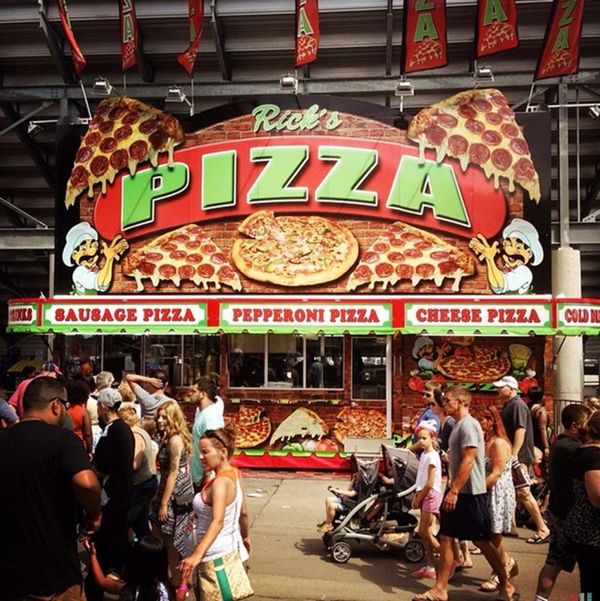 In our day-to-day eating habits, we typically like to be as healthy as possible — You know, with the exception of the occasional cupcake (or three). But when the state fair rolls into town, all that goes straight out the window. Basically, if it’s not fried, we’re not eating it. While the usual deep-fried Twinkie or corn dog is an expected fair food find, some places are going above and beyond when it comes to junk food creations. These are definitely not for the calorie-conscious, but if you’re up for some serious indulgence, grab one of these treats to snack on while you roam the petting zoo.

1. Apple Pie On-A-Stick: Because, really, who needs to deal with a fork? Sliced apples are dipped in a funnel cake batter and apple pie spice. It’s then deep fried, topped with cinnamon sugar and served with a side of caramel and three apple wedges.

2. Ultimate Bacon Explosion: This creation features eight ounces of bacon-wrapped brisket trimmings infused with jalapeño cheese and spices, which is then smoked and spritzed with sweet chili barbecue sauce. Ron Swanson, where you at?

4. Burger Dog: If you can’t decided which classic BBQ meat to go for, just get them both in one. The burger dog is a ground blend of hamburger, hot dog, bacon, cheese and a splash of jalapeño on a hot dog bun.

6. Mac and Cheese Cupcakes: Before you freak out: This isn’t a noodle + frosting type situation. The mac and cheese is nestled in a breadcrumb crust and baked in a cupcake pan. Of course the handheld food is “frosted” with a dollop of Cheez Whiz. (Photos via Minnesota State Fair)

7. S’mores-Stuffed Chocolate Chip Cookie Dessert: This crazy concoction is essentially a layer of chocolate chip cookie dough, a Hershey’s bar, toasted marshmallows, graham crackers, and another layer of cookie dough. You may want to make an appointment with the dentist now.

9. Bacon Bottom Pizza: In place of the usual breaded crust, you’ll find a bacon weave acting as the bottom of a pizza, which is topped with homemade pizza sauce, mozzarella cheese, pepperoni and sausage.

10. Deep Fried Pretzel Crusted Brownies on a Stick: Fresh baked fudge brownies are rolled in crunchy pretzel pieces. That combo is then deep-fried and served on a stick with a side of sea salt caramel dipping sauce. (Photo via @dreampizza)

What crazy fair food are you looking forward to? Share with us in the comments below.

Cortney Clift
Cortney is the senior writer and special projects editor at Brit + Co. She typically covers topics related to women's issues, politics, and lifestyle. When she's not buried behind her computer you'll find her exploring New York City or planning her next big adventure.
Party
More From Party