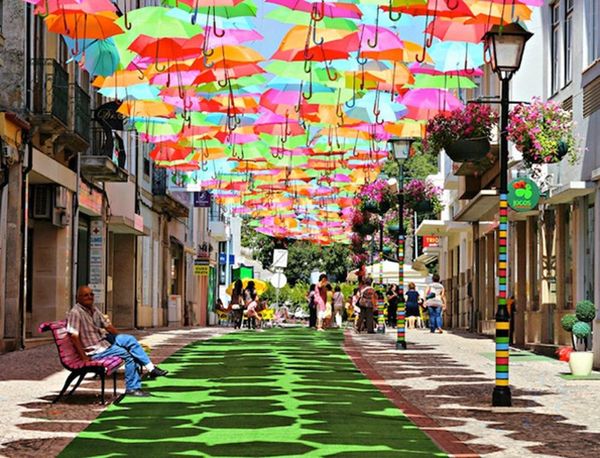 Clever street art always make me smile. Whether it beautifies the existing urban landscape, encourages participation from passersby or is making a political statement, it’s sure as heck an improvement over graffiti tagging. Here are 20 of my favorites from around the world, some of which I’ve been lucky enough to experience in real life.

1. Little People: London’s Slinkachu creates miniature scenes of tiny people with everyday items. It makes me think about all the things we might see if we stop to pay attention once in a while.

2. Wall Not Found: A proposed wall piece from UK-based John Scarratt that also doubles as a clever advertisement. That 404 error page has made us all cringe before, but it’s also pretty funny.

3. Muhammad Ali vs. Street Fighter: Combo the Culture Kidnapper took an iconic photo of Cassius Clay knocking out Sonny Liston and substituted Ryu from the Street Fighter video game series. This wall is in Paris and conjures up memories of playing video games as a kid.

4. Fremont Troll: This troll statue is located under a bridge in Seattle’s Fremont neighborhood. It was created by four local artists in 1990 and has become a popular stop for visitors ever since. In case you were wondering, the troll is clutching an actual Volkswagen Beetle as if it had been swiped from the bridge above. (Photo by seattle.about.com)

5. Almost Invisible Boxes: Culver City, California commissioned artist Joshua Callaghan to make nine utility boxes seem as if they weren’t really there by printing vinyl images on the boxes of what each one is obstructing. No word on whether bird ER visits are at an all-time high.

6. 3-D Street Art: Talented is the artist that can create the perception of depth on a two dimensional surface. This example hails from Berlin, but there are many many more all over the world.

7. Piano Staircase: Volkswagen and the Fun Theory teamed up in Stockholm to encourage people to be a little more active. They installed a piano staircase that plays notes beside an escalator to demonstrate how making something more fun can change behavior. (Photo by K.G. Vogelius)

8. Yarn Bombing: This public art form of covering objects in colorful yarn is native to the Netherlands and has since gained great popularity all over the world (this particular bus is in China). Hopefully, you have yarn bombers in your city too. For more on this cozy trend, check out our roundup of 15 awesome yarn bombs.

9. Before I Die: A simple installation that begs the question of what you want to do before kicking the bucket. New Orleans artist Candy Chan is said to have started the idea after losing a loved one. I love how these encourage participation and get us to think about how we’d really like to be spending our time.

10. Trampoline Road: There’s no room for this in a crowded city, but it’s still awesome that Russian architects built a 51 meter trampoline road. It’d be impossible not to be happy if you were hopping around on this everyday.

11. Space Invaders: Remember the classic arcade game Space Invaders? French artist Invader is kinda obsessed and has traveled the world leaving behind characters on mosaic tiles. Many cities even have maps so you can find them all.

12. Reverse Graffiti: If you can’t draw or paint on a surface, can someone stop you from cleaning a surface to create an image? Reverse graffiti is just that. Street artist Alexandre Orion is famous for his work in Sao Paulo, Brazil.

13. Teacup Balcony: An amazing use of architecture in Tokyo to turn this corner into something special. Tea time on these balconies whilst reading Haruki Murakami would be epic.

14. Bench-Eating Shark: The bench in Bangkok makes for the perfect funny photo op. I’m seeking this out if I’m ever in Thailand again.

16. Crown Fountain: Chicago’s Millennium Park has an interactive video sculpture that spouts water onto visitors on hot summer days. Although controversial at first (it is like someone is spitting on you), it has endeared itself over time. (Photo by BrianI on Panoramio)

17. Giant Lego Bridge: California has LegoLand, but Germany has a bridge made to look like interlocking pieces of Lego. My hat goes off to street artist Megx.

18. Umbrella Art: A street in Portugal is decorated with colorful umbrellas for an art festival. Besides bringing instant smiles, it provides shelter from the sun.

20. Banksy GIFs: No street art roundup would be complete without Banksy, but have you seen these animated GIFS from Made by ABVH? I love how they bring a little motion to Banksy’s pieces.

Have a few faves of your own? Help us add to the list in the comments below!

Kiran Umapathy
Kiran Umapathy is a 20-something professional dreamer. When he's not making awesome at Holiday Matinee, you can find him getting lost on photo adventures or listening to vinyl.
Art
Home
Art street art