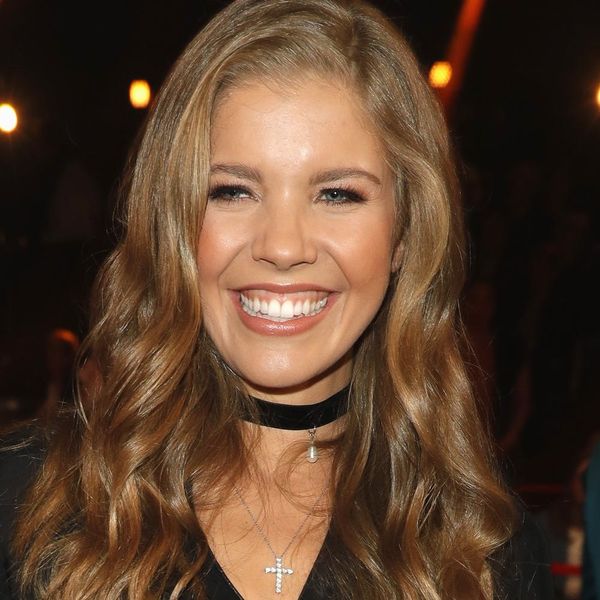 Considering that “Swarovski” has more or less become synonymous with “crystals,” it should come as no surprise that the heiress to the Swarovski throne, Victoria Swarovski, just made her way down the aisle in a dress completely covered in gems: half a million of them, to be exact.

The 23-year-old wed her longtime partner, property investor Werner Mürz, in an Italian ceremony fit for a princess, right down to her breathtaking gown. The custom designed wedding dress cost a reported £700,000, or the rough equivalent of $885,710 (!!). The jewel queen chose Dubai designer Michael Cinco to create the custom masterpiece, which also featured paillettes and laser-cut flowers on the princess-cut, A-line skirt and sheer bodice.

Pretty as it was in the front, the dress also featured a six-meter long train that spanned the length of no less than four pews and reportedly weighed 46kg or 101 pounds. Wowza! Her accessories were no less impressive — the Austrian bride chose a pair of ivory Jimmy Choo heels stamped with her initials and a pair of half-hoop diamonds.

Cinco pulled double duty for the lavish affair, designing a second jewel-encrusted frock for the singer’s reception. While its train was still fairly impressive, it was a bit more flirty than her more traditional wedding gown, thanks to its high-lo skirt, plunging neckline, and of course, plenty of crystals. Swarovski was clearly right at home in the design, twirling and smiling nonstop in a heartwarming fitting video the designer posted to his page.

Swarovski isn’t just a crystal heiress either — she’s also a professional singer in Austria signed to Sony Music, and sure enough, she performed a set at her own nuptials.

Eat your heart out, Pippa Middleton.

What do you think of Victoria’s super extra wedding gown? Tell us over @BritandCo.

Nicole Briese
Nicole is the weekend editor for Brit + Co who loves bringing you all the latest buzz. When she's not busy typing away into the wee hours, you can usually find her canoodling with her fur babies, rooting around in a bookstore, or rocking out at a concert of some sort (Guns N' Roses forever!). Check out all her latest musings and past work at nicolebjean.com.
Celebrity Wedding
Wedding Style
Celebrity Wedding
More From Wedding Style