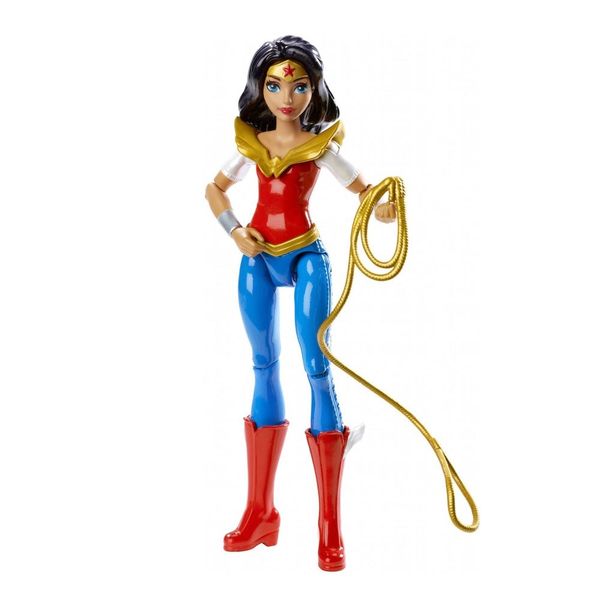 Thousands were disappointed recently when Rey from Star Wars: The Force Awakens was left out of key merchandise (surprising, considering how easily Star Wars passed the Bechdel test). Though toys like Goldieblox’s Ruby Rails kick serious butt in the gamechanging forget your gender stereotyping department, the market is seriously lacking in terms of inclusivity when it comes to action figures. But fear not, because here comes Target to totally save the day! The nationwide retailer is introducing a line of amazing female super heroes this spring and we could not be more thrilled about it.

Hitting Target shelves this March, “DC Super Hero Girls” action figures – and the accompanying line of clothes featuring girl superhero awesomeness – are pretty freakin’ awesome. The toys will featuring some of the most famous lady superheroes out there like Wonder Woman, Supergirl, Batgirl and Bumble Bee. But they don’t stop there. They’re also including female villain action figures like Poison Ivy and Harley Quinn.

Target also plans on releasing a line of clothing that includes T-shirts, tanks and shorts emblazoned with the character’s logos that are sure to inspire every budding #girlboss. Especially with stylish shirts featuring messages like, “SUPER – STRONG – EPIC – BRAVE”. Yes, yes and yes!

“Target prides itself on keeping a pulse on pop culture and we have a legacy of getting behind the hottest franchises to bring our guests exclusive merchandise,” Scott Nygaard, Senior VP of merchandising for Target, explained on the company’s website. “We are thrilled to be working with some of the industry’s leading partners to introduce a new generation to these inspirational characters, and know fans of all ages will embrace these beloved and iconic heroines as they build new memories.”

Fans of all ages indeed! Um, can we please have adult sizes too?

Who is your favorite gal superhero or villain? Tweet us @BritandCo!

Desiree O
Desirée O is a ‘Professional Bohemian’ who loves anything and everything related to the arts, entertainment, and pop culture. She ADORES being a ‘Newsy’ for Brit + Co, covering all of the latest tidbits of awesomeness that you want to read about. When she’s not writing, she’s either making messy art, going on long adventurous walks with her camera, or poking around over at bohemianizm (http://www.bohemianizm.com/). You can find out about Desirée O and her work at http://DesireeO.com/ or follow her on Twitter @DesireeO.
target
Entertainment
target