Barbie Who? Here’s the New Doll That Will Be on Every Wish List This Holiday 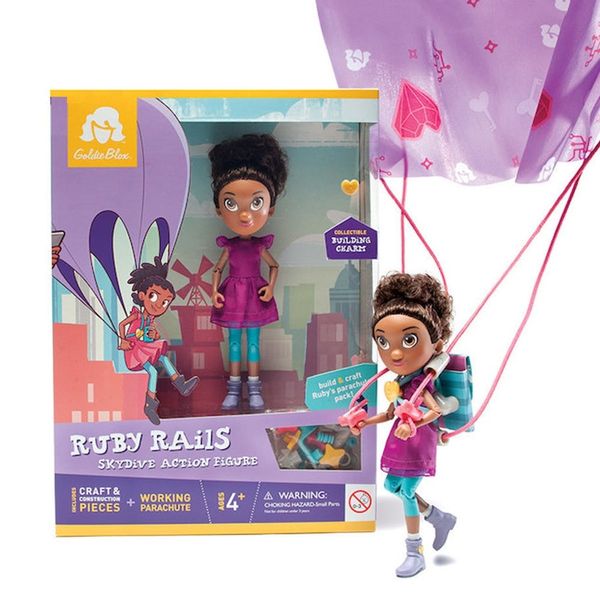 James Bond, Schmames Bond. There’s a new action hero doll in town, and her name is Ruby Rails. Sorry not sorry, Barbie and 007. Ruby Rails, created by STEAM-oriented toy company GoldieBlox (who has another action hero doll by the same name), makes her debut just in time to make it onto every little kids’ holiday wish list. Not only is Ruby Rails an awesome, tech-savvy action hero who takes top billing (as in, she’s no sidekick), but she’s also a P.O.C. Seriously amazing. Even as a grown-up, I’m wondering if I can claim her as a role model.

Ruby Rails ($25) comes with her own skydiving parachute, a coder backpack and tons of cool techie accessories. According to the Representation Project, women only make up 12 percent of leading protagonist roles in the top 500 films of all time in Hollywood, and women of color are only represented by a measly, truly dismal ONE PERCENT. That’s a serious case of underrepresentation. And that is why the Ruby Rails doll as a leading action hero is crucially important for little girls (and boys) everywhere. Plus, GoldieBlox created an amazing video depicting Ruby Rails and GoldieBlox in a few iconic movie roles that were traditionally portrayed by men. What can we say? The ladies slay it.

Here she is dodging bullets and performing superhuman, acrobatic feats as Neo from The Matrix.

And traveling through time in her miniature DeLorean as Marty (or should we say Martine?) McFly. GoldieBlox is sidekicking it as Doc Brown from Back to the Future.

And space is the final frontier for our girl. Here she is kicking intergalactic butt as Lieutenant Commander Geordi La Forge to GoldieBlox’s Captain Jean-Luc Picard from Star Trek: The Next Generation.

All in all, she leaves us wishing we had Ruby Rails around when we were kiddos!

What do you think about Ruby Rails and GoldieBlox? Tell us in the comments below!

Kimberly Wang
Kimberly Wang writes about all things pop culture, tech, style, and beauty. She's a Bay Area transplant and has an MFA in Creative Writing from Columbia University. On a sunny New York day, you can find her hanging out with her mini schnauzer Isabelle Jellybean on a blanket in Central Park.
Toys
Moms
Toys
More From Moms