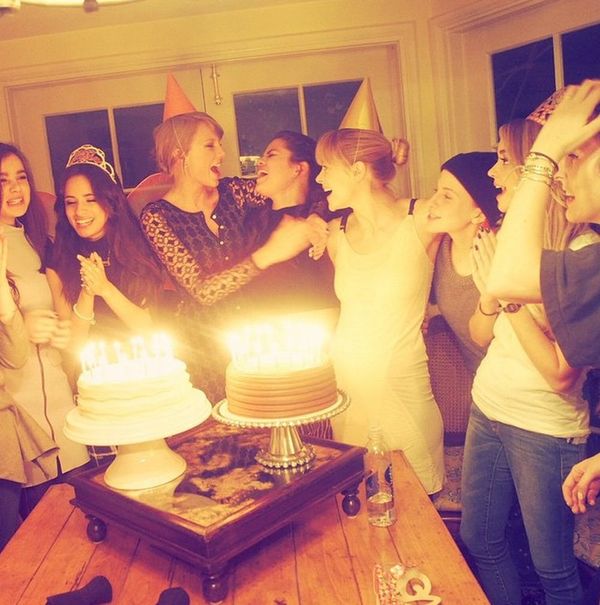 If all of Hollywood was made into a yearbook, Taylor Swift would, without a doubt, be voted “most popular.” Between Jaime King, Lorde, Karlie Kloss, Lena Dunham and Sarah Hyland, this girl seems to be BFFs with just about all of young Hollywood. And it’s no surprise — she’s thoughtful, fun and best of all, she definitely knows how to throw a killer party. We’re not talking about a sloppy club night here, people, but rather a classy get-together for the ages. If you’re in the midst of putting together a celebration of sorts for your BFF. Take a few hints from the pop star and all-around gem of a human.

1. Be sure to have copious amounts of cake… and party hats. Because a party just isn’t a party without a giant helping of cake. Party hats are also a must. (via @taylorswift)

2. Make it a Dinner Party. For that bestie who doesn’t want a huge soirée, invite your core group of friends and host a low-key communal dinner. (via @taylorswift)

3. Create an Instagram Station. Ample photo ops are definitely a must. Take a few cues from Taylor’s legendary birthday party and set up a fun backdrop. Make sure to have plenty of playful props handy. (via @taylorswift)

4. Buy a few disposable cameras. Not so into Instagram? Splurge on an instant camera or pick up a couple of old-school disposables and sprinkle them around the party for guests to take pictures with. It’ll be like a second bday present for your bestie when you get the expectedly hilarious pics developed a few days later. (via @therealsarahhyland)

5. End the night with some sparklers. Because you’re never too old for sparklers. Just remember, safety first, folks. (via @jaime_king)

6. Get beachy. And when all else fails, rent a boat. Okay, fine, or go on a trip. (via @taylorswift)

But really… parties on boats are awesome. (via @jaime_king)

What are your key elements for a super fun soirée? Share with us in the comments below.

From Your Site Articles
Cortney Clift
Cortney is the senior writer and special projects editor at Brit + Co. She typically covers topics related to women's issues, politics, and lifestyle. When she's not buried behind her computer you'll find her exploring New York City or planning her next big adventure.
Birthday
Party
Birthday Taylor Swift