‘The Marvelous Mrs. Maisel’ Episode 4 Recap: Midge Gets to Work (in More Ways Than One) 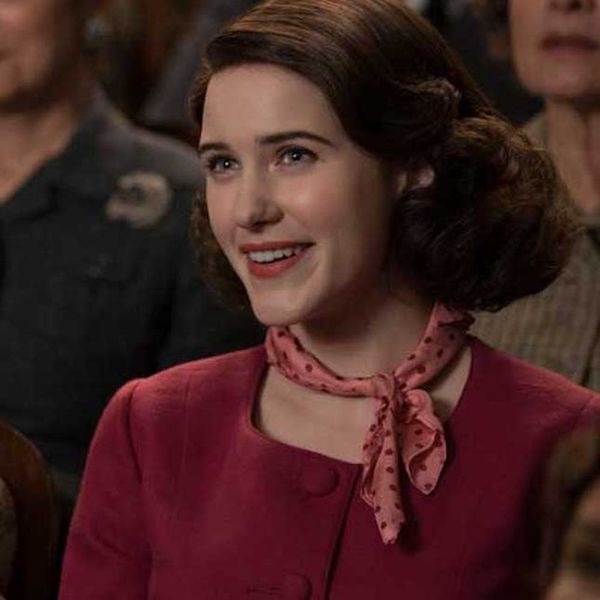 The fourth episode of The Marvelous Mrs. Maisel is another quiet one, but the slowness is not necessarily a bad thing. It would be unrealistic if Midge just jumped into comedy and was an amazing superstar right off the bat — plus, the magic of her sets would start to wane if we were treated to one every episode. For now, Midge is ready to jump wholeheartedly into comedy, but she still has to both keep her life together and learn how to actually be a comic.

For the first part of that, she works on moving out of her apartment and moving in with her parents. This goes about as well as can be expected. Abe is rankled at having his life upended, particularly by his bratty grandson. Rose, meanwhile, is convinced this is a temporary stop for Midge until Joel comes back. Neither Midge nor Abe has the heart to tell Rose that Joel already came back and Midge said to hit the bricks.

Speaking of Joel, he’s off licking his wounds because Midge wouldn’t take him back. So what does he do? Shack up with Penny Pan in a different Upper West Side apartment. When Midge finds out, she’s livid — not because she wants Joel back, or even because he’s living with his mistress, but because he apparently left her for the exact same life. Well, the “Methodist version of their life,” but basically the same life.

It finally comes out during their fight that Joel left her because he thought after he bombed at the club that she’d never look at him the same way again. But Midge knows that’s B.S. That was Joel’s hang-up. Midge didn’t care that he bombed. She would have helped him bounce back from that. But Joel probably realized that he hates his daytime life, and then once he bombed in his nighttime life too, he felt inadequate and small and took it out on Midge and his children because he’s a man-child who needs to grow up.

That probably won’t happen, but at least Midge is growing up (or at least trying to, which is harder than it sounds when you’re back under your parents’ roof).

As part of learning how to be a comic, she’s studying other comics with Susie, which is a delight to watch. It also fuels Midge’s type-A drive to be good at things. Comedy does excite her more than anything else, but she’s also partially motivated by the drive to be successful at whatever she chooses to do.

The other part of learning how to be a comic is simply coming out of her Upper West Side bubble, which means she’s reading the paper and paying attention to current events. This new wokeness on Midge’s part comes with the realization that her parents still see her as a little girl (or at least a teenager), and they are going to treat her as such as long as she’s living with them. So it’s time to get a job (which will hopefully lead to being able to afford her own place).

The friendship between Midge and Susie is terrific. They are obviously very different people, and I don’t really ever see them lunching together at the Rainbow Room, but it is nice to see them slowly moving beyond a mentor/mentee relationship.

Midge: “In college, no one studied better than me. Research? No one was better at research than me. I had fabulous binders.” While Midge may seem very Lorelai Gilmore, it’s fun to see there’s a little Rory Gilmore in there as well.

Midge: “If women don’t realize what’s going on in the world, they won’t step in and fix it. Because they will fix it!” Preach, sister.