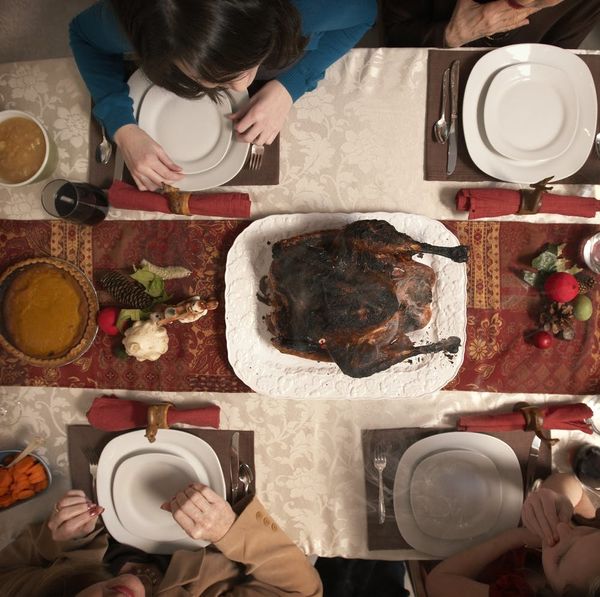 It happens every year. Though I make every effort possible to mentally and emotionally prepare to go home for the holidays to visit my family, I can never seem to keep the promises I make myself. I won’t be defensive if someone makes a critical remark to me, I tell myself on the five-hour ride from Minneapolis to my hometown in Wisconsin. If someone says something hurtful, I’ll just ignore it, because I know who I am. My husband, admirably calm, assures me that things will go smoothly, but promises to stand up for me if someone says something upsetting. This trip home will be different, I tell myself. No one can hurt me. And then, someone does.

Like clockwork, we sit down at the dinner table, and within a few minutes, a well-meaning family member comments on how I’ve gained weight or my kids don’t sleep through the night. And I lose it. Unable to appear unaffected, I leave the table as politely as I can and take some deep breaths in the guest bedroom. “Ashley has always been so defensive,” I hear someone mutter under their breath before nonchalantly moving on to the next topic of conversation. I want to go home. I don’t like who I am here. No, that’s not it; I don’t like how I feel.

Don’t get me wrong: I can usually handle criticism. In fact, as a writer, I pretty much live at the receiving end of remarks about my work. And I believe that, in general, when we’re open to hearing hard things, we can become better versions of ourselves. It’s part of growing. But there’s something painful — triggering — about the people who are supposed to see past our flaws pointing them out at the dinner table (and not just because those things aren’t exactly polite or enjoyable dinner conversation). For me, the most troubling part of these interactions with relatives is feeling like they all see me as the person I was a decade ago — like I’ve been typecast as a version of myself I’ve outgrown, and, therefore, am expected to fail in the same ways. It’s almost like I mentally lose control and revert back to childhood.

I’ll admit it: 10 years ago, before I left home for college, I was defensive. But given the environment I grew up in, I probably didn’t have a choice. My mom (who died the year I graduated college) and I had always had a mercurial relationship, exacerbated by her addiction to prescription drugs and the emotional highs and lows that came with it. I remember my sophomore year of college she came to pick me up from college for Christmas, and, visibly strung out, spun off the icy highway. When I asked her calmly to let me out of the car, she lashed out at me, eventually dropping me off at a random rest stop in the middle of Wisconsin and leaving me there. Without knowing it, my mom programmed me to be hyper-vigilant. Because if she wasn’t going to protect me, I had to do it myself.

As a result of some of the things I experienced with my parents, I’ve dealt with some pretty serious anxiety and OCD. But over the past 10 years, I’ve worked really hard to overcome those things. Through a combination of medication, therapy, and healthy distance from my family of origin, I’ve emotionally matured to the point of being able to forgive my family and healthily separate myself from the ways they’ve hurt me. I’ve grown up and away from my childhood trauma, and along the way, I’ve built a family of my own. So why do I revert to this hard-hearted, defensive version of myself whenever I go home, like I’m a helpless kid again? Why, when I have the tools to remind myself how strong I am in the midst of anxiety, do I slide right back into it the second I step foot in a family member’s home?

Because trauma has a way of burrowing deep down inside of us and suddenly rearing its ugly head when we’d much rather sit and enjoy a peaceful family dinner. Because my body wants to protect me from any semblance of a threat it perceives, even if it’s my well-meaning grandma asking a simple question about how I parent my boys or why I wear my hair a certain way. Because the little girl inside of me, though she’s grown into a woman and a wife and a mother, remembers the pain of being asked to carry things that were too heavy for her.

I’m stronger now. I’ve done the emotional heavy lifting of working through the pain of my childhood, and it’s probably healthy I live a few hundred miles away. When I’m not immersed in the landscape in which I was abused, I can focus on moving forward into the person I was always meant to become — a woman weathered by, but not defined by, pain.

Returning home and being reminded of my past may always be an emotional trigger, but my response, however dramatic, isn’t a failure or a reversion back to my childhood. It’s a reminder that something fierce inside me wants to protect me from pain, which, when I think about it, is actually a kind of beautiful thing. So instead of spending the car ride rehearsing calm responses to criticism or wearing myself out imagining difficult conversations, I want to revel in the hard work I’ve done to become the person I am — a woman who wouldn’t be here without first having been the person she once was.

How do you deal with the emotional triggers that come with the holiday season? Connect with us @BritandCo.