This Artist Is Fighting Censorship to Promote Body Acceptance 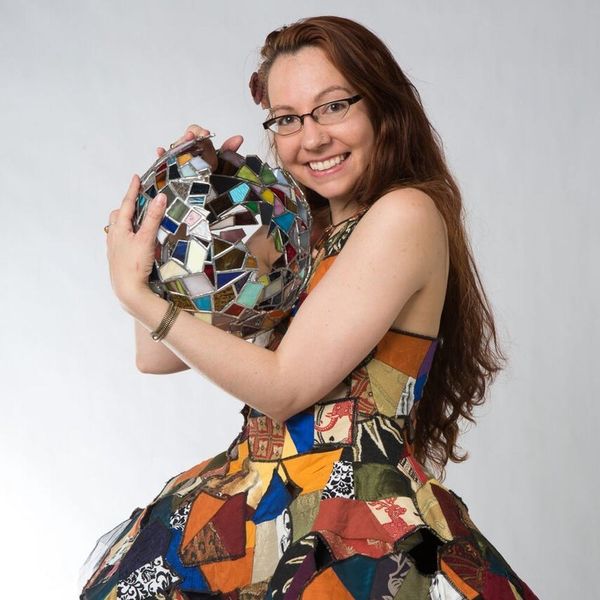 Art has always been a great medium for fighting for what you believe in, including body positivity, acceptance, and self-love, which is exactly what Minneapolis-based artist Kristin Harsma set out to do with her latest show, which brings together 30 artists and is aptly titled “Beauty in EveryBODY.”

Harsma, whose mediums of choice are life drawing and stained glass, set out “to encourage people to accept others — and themselves — for who they are, despite their body shape, gender, race, or sexuality,” she tells us via email. “With all the political drama and current events of the #MeToo movement, I felt it was important to do it now,” she adds.

Another piece that I liked at the show

“Beauty in EveryBODY” was unveiled in February in Artspace Jackson Flats, an apartment building reserved exclusively for artists, which has two gallery spaces open to the public. When the show debuted, it featured paintings, multimedia pieces, and even live body painting set up across both spaces.

“I expected there to be a discussion created around the work and artists sharing their stories with others,” says Harsma of her vision. Unfortunately, the opposite happened when a fellow resident unexpectedly filed a complaint.

It all started with the body painting taking place “in our smaller gallery, which people walk through to get to their apartments. The model was wearing pasties and underwear, but an older resident started a post on our internal Facebook group saying she was nude. It blew up from there,” the young artist reveals.

As a result, Harsma was forced to censor the works in question. “I covered the ‘naughty bits’ on any works that I thought were the issue,” she says. “I taped paper to the wall over the paintings with the word ‘censored’ over it.” That wasn’t enough, however, and she discovered that someone had actually “covered more works with paper, taping directly to the canvas.” She was soon asked to move everything into a second gallery, which is secluded and has a separate entrance.

“I feel that by taking down the works initially, it reinforced our negative ideas about our bodies,” she admits, which is why she, and a group of fellow residents, are now fighting back with a brilliant new show, dubbed Censored; Artists Respond. “A couple of residents decided to put on a show taking on the issues around censorship head on,” she says of the new exhibit, which opened on March 16 at (you guessed it!) Artspace Jackson Flats and was curated with the help of Megan Kelly, April Barnhart, and a few other artist residents.

“The smaller gallery displays work that is self-censored by the artists, so anything up to the line of what is deemed safe and the larger gallery has blacked out windows and big warning signs. In this space are more shocking works. Plenty of nude art of all sorts!” she reveals.

The point isn’t just to shock. “The hope is that this show will portray Artspace Jackson Flats as a gallery taking on relevant topics as a community.”

From Your Site Articles
Barbara Pavone
Barbara Pavone is a pop culture-obsessed writer based in beautiful (but ridiculously cold) Montreal, Canada. When she's not working, she's sipping on a Pimm's Cup and daydreaming about her celebrity hero, Saint West.
Art
Body Positivity
Art Artist Body Positive Creativity Every Body
More From Body Positivity