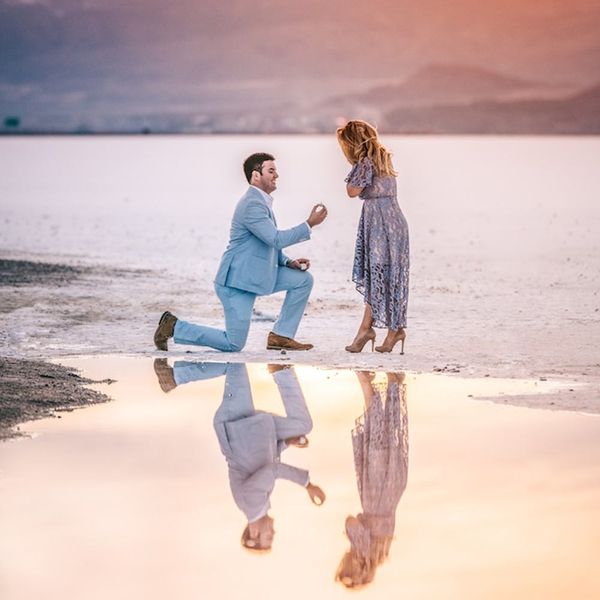 If you think you know epic proposals, wait ’til you hear about this gorgeous Salt Flats surprise. When Morgan decided to propose to his girlfriend Nathalie, he recruited the help of Nathalie’s boss Sarah. Together, they pulled off one of the greatest proposals in history. Fo’ real. Seriously, Morgan might just be the best boyfriend *EVER*. And there’s no doubt that Sarah is just about the most bad-ass boss to exist. Read on to find out just how they managed to trick Nathalie into thinking she planned the whole thing!

When Nathalie met Morgan, she didn’t know that their chance encounter in the elevator would eventually change her life. Nathalie was finishing up a tour of the MBA program at Brigham Young University when a boy in a bright yellow Polo shirt entered the elevator she was in. Within minutes of making small talk, they discovered they both had ties to Annapolis, MD. They said their goodbyes, but later that evening, Nathalie received a message via Instagram from that very same boy that went a little something like this: “Hey! It’s Morgan from earlier today in the elevator :) I noticed your name from the name tag you were wearing and instantly regretted not asking you for your number or anything after I left! Couldn’t just let a girl from Maryland go like that.” The following day they went to breakfast before Nathalie caught her afternoon flight back to Maryland, and from that moment on nothing was ever the same.

Shortly after Valentine’s Day, Morgan contacted Nathalie’s boss Sarah, asking for her help in pulling off the most EPIC surprise proposal. Because Nathalie had complete access to everything in Sarah’s life (including email, phone, banking, Facebook, Instagram), Sarah changed a few passwords, avoided contact with Morgan on social media and made sure to keep her phone away from her at all times. After a few covert text messages, Morgan and Sarah decided to stage a ruse. It began by convincing Nathalie that Sarah had been selected by Destination I Do magazine to collaborate on a series of editorial bridal shoots across the United States. Given the recent attention Sarah’s photography studio, Intrigue, had received, this was an easy sell. She bought the story “hook line and sinker,” getting excited for the opportunity to be involved just as Sarah had expected she would. In order to be sure that there were no slip ups, Sarah even began telling others in their circle about this imaginary project with Destination I Do.

After sharing details of the shoots with Nathalie, Sarah felt the time was right to ask her about the possibility of doing a shoot in Utah. Prior to this, Morgan told Sarah how much he loved the Salt Flats. So once Nathalie mentioned the Salt Flats as an option, Sarah was sure to amp up enthusiasm over her suggestion. Meanwhile, Morgan was meeting with jewelry designers to create the most perfect custom engagement ring. With the ring ordered, Morgan was ready to set the engagement date. To really sell the idea that the Salt Flats were Nathalie’s idea, Nathalie and Sarah began texting daily about the Destination I Do project and hatched a plan to do an epic styled photo shoot on the Flats. Once it came time to shoot, Nathalie invited Morgan to tag along for the day, and also suggested that the two of them dress up and take Easter pictures after the shoot, which gave him the excuse needed for them to be all dressed up. The best part was that Nathalie was convinced the whole thing was her idea! With this last detail in place, Morgan and Sarah’s plan was solid, if not perfect.

To ensure Nathalie was dressed in her Easter Dress when she arrived, Sarah called Nathalie and let her know the model was delayed and suggested she take her Easter photos first. As soon as she made her way to their staged location, Sarah frantically explained that they were losing light and the model was about to arrive. She hustled her into the perfectly formed circle of greens and began swapping out bouquets as they tested the light for the photographer. Morgan waited patiently for his cue, and when his moment came, he asked to step into the circle to take a photo with his beautiful girlfriend. As soon as he took her hand everyone else naturally stepped back and watched the scene unfold.

The moment as told by Nathalie’s perspective: “The second I saw him start to get down on one knee, my mind stopped. Everything went in slow motion and I couldn’t understand the words he was saying. I was paralyzed. I remember looking at Sarah, then looking back at him, then looking at my brother. I remember thinking, ‘It’s really happening!!!’ While my mind was trying to understand what was happening, Morgan had been patiently waiting for an answer. In my state of shock, I remember hearing his sweet, calming and reassuring voice say, ‘Babe, what do you think?’ It’s at that moment that I said yes. At that moment, I made the biggest decision of my life.”

Although it is hard to see in this photo, there was also a perfect little Mrs. box that Morgan had monogramed just for Nathalie. This was truly a remarkable moment, and asking Sarah to be involved was an incredible honor. Sarah had been thankful for Nathalie for quite a while, and now Sarah had become equally thankful for Morgan. In her words, “He is more than a pretty face for Nathalie to bat her eyelashes at. He is a kind and giving man that went out of his way to assure his bride-to-be had a dream come true.”

Their wedding is set for September 6, 2016 at the JW Marriott Essex House at Central Park. Congratulations to Morgan and Nathalie!

How would you react to a proposal as epic as this one? Follow us on Pinterest to get inspired for planning an equally epic wedding!

Grace Lee
Grace is an LA-based freelance writer, documenting her everyday life via her Instagram. She's a fan of spontaneity, individual style, all things Harry Potter, cuddling with her two dogs, and exploring new places. More about Grace can be found on her blog, Girl Meets World.
Celebrity Couples
Wedding Planning and Decor
Celebrity Couples Engagement Photography
More From Wedding Planning and Decor