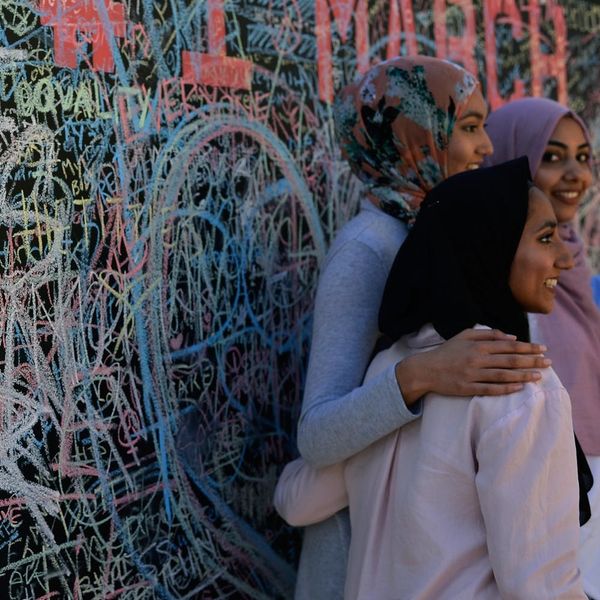 Now that you’ve taken the first step toward change following the Women’s Marches by sending a postcard to your local Senator or even hosting a “postcard party” for your friends and fam, it’s on to phase two of the movement’s 100-day plan.

The group is asking women to organize once more, this time in a “huddle” (which we can’t help but think may be a direct response to the “prayer huddle” President Trump recently participated in after appointing Neil Gorsuch as our next US Supreme Court Justice).

According to the march website, the huddles are meant to be a safe space for individuals to “visualize what a more Democratic, just, [safe] and [free] world could look like four years from now…and [working] backwards” to figure out what needs to be done to get there.

The site allows you to search for the nearest huddle happening near you, and also provides you with a full-on printout step-by-step guide for how to host your very own.

Organizers suggest meeting in groups of 10-15 for roughly 90 minutes in order to better get to know one another and figure out your next steps as activists. For starters, as the organizers point out, you could take group photos with signs of causes near and dear to your heart, then Tweet them to your Senators and Congress representatives (the contact info for which is conveniently located here).

Other ideas including jumping in on other marches being currently being planned on Washington and joining other political activist groups, such as the Working Families Party and Swing Left.

Essentially, your main goals are getting organized and figuring out the best course of action to take for you and your group.

So what are you waiting for? There’s much to be done and little time to waste — it’s on to phase three come February 10.

Nicole Briese
Nicole is the weekend editor for Brit + Co who loves bringing you all the latest buzz. When she's not busy typing away into the wee hours, you can usually find her canoodling with her fur babies, rooting around in a bookstore, or rocking out at a concert of some sort (Guns N' Roses forever!). Check out all her latest musings and past work at nicolebjean.com.
Politics
Current Events
Politics womens march
More From Current Events