This New Tablet Can Digitize Your Notes Using Pen and Paper 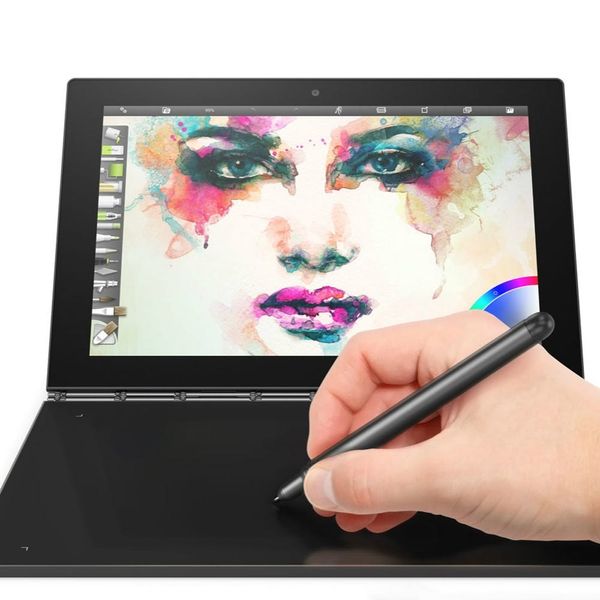 We have a confession to make — as writers, we’ve never fully GOTTEN the tablet — even with rumors of Apple upping its iPad game. To us, a shiny touchscreen isn’t incentive enough to give up full functionality, particularly with regard to our beloved typing tools — we’d just as soon use a mini laptop and keep our old school keyboards, thank you very much.

One company in particular seems to FINALLY be on our wavelength, however, and we’ve gotta’ say: We’re pretty stoked.

Enter Levono’s Yoga Book — the first tablet to allow you to not only type, but to WRITE, digitizing your notes in the process. Whoa.

So how does it work? The Yoga book has dual screens, if you will, the bottom panel of which can be typed on just like a keyboard or transformed into a blank canvas for a pen that will allow you to do everything from draw to actually digitize your handwriting when a piece of paper is placed over the screen. It can even adapt itself to your “typing” style over time, adjusting the size of its tap targets to fit your fingers!

Specifically designed with productivity in mind after research showed that tablets were being used in classrooms and the like, despite not being made for such a purpose, the Yoga Book is essentially a laptop with a touch-screen built-in, but better.

Priced between $499-550, depending on your operating system choice, it’s about $100-249 cheaper than an iPad Pro, with features that go above and beyond — particularly if you’ve got a nostalgic love of pen and paper.

But note, it’s not for everyone: As Jeff Meredith, vice president of Lenovo’s Android Chrome Computing Business Group, told The Verge, “For certain, some people will say, I’m a heavy user of the Office suite,’ or ‘I need Adobe,’ this won’t be the device for them.”

We, for one, just might be sold: Check it out in action below.

What do you think of Lenovo’s latest? Share with us over @BritandCo!

Nicole Briese
Nicole is the weekend editor for Brit + Co who loves bringing you all the latest buzz. When she's not busy typing away into the wee hours, you can usually find her canoodling with her fur babies, rooting around in a bookstore, or rocking out at a concert of some sort (Guns N' Roses forever!). Check out all her latest musings and past work at nicolebjean.com.
Tech News
Tech
Tech News