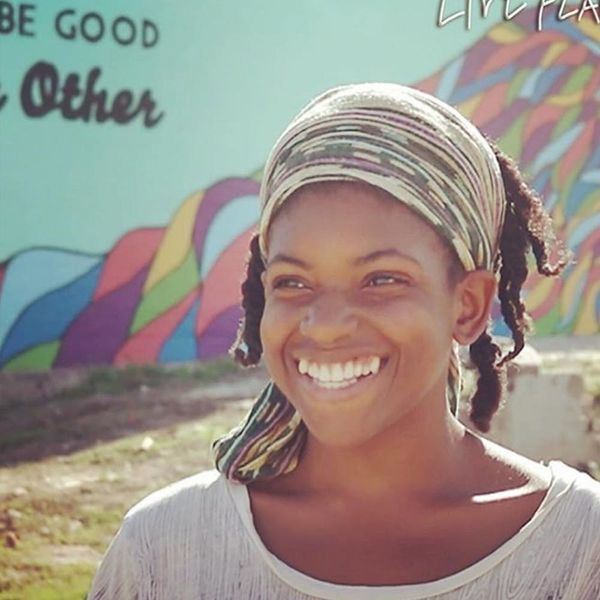 Each and every time she needed groceries, Los Angeles native Olympia Auset used to take a bus nearly two hours away from her own neighborhood of Inglewood so she could have access to fresh, affordable food that was compatible with her vegan diet.

“Living in a food desert while upholding a vegan diet was very rough and at times, expensive,” says Auset. But instead of complaining, she decided to do something about it. Enter SÜPRMARKT, the affordable grocery pop-up market she launched to make healthy food accessible to South Los Angeles.

Food is a social justice issue, and it’s one of Auset’s greatest fights. Having worked in food her entire adult life, Auset developed a deep interest in how things like race, class, gender, and geography play into the food system. She points out that nearly 23.5 million Americans live in areas called food deserts, where the nearest store that sells groceries is more than one mile away.

SÜPRMARKT, which just celebrated its one year anniversary, holds a pop-up up once a week in areas with limited food access. There, Auset and her team will sell a range of organic produce and bulk goods like nuts and dates.

“When you live somewhere where getting your hands on an avocado or a pesticide-free mango isn’t simple, you experience how it affects the quality of life,” Auset says.

Hey all of our #NewFollowers, if you haven't seen the @black_vegans_rock video Olympia did this summer check it out! Even if you aren't going #vegan it has some awesome gems 💎! Special Thanks to @kydjor for the footage 📸 Link In Bio.👆🏾

Since its inception in July 2016, SÜPRMARKT has managed to provide an estimated 500 cases of affordable organic fruit, vegetables, and seeds to the city’s south-side community. They have also teamed up with major organic suppliers in the Los Angeles area to distribute un-sellable food to communities that can use it, which Auset believes will help keep quality organic food out of the trash and bring it into the hands of people who can really use it.

While SÜPRMARKT is a ways off from eradicating food deserts in South LA, they are currently raising funds to expand their services to serve more people. Auset believes that food is the biggest tool we have to change the world, and she will continue to combat food insecurity, one pop-up grocery store at a time!

Do you live in a food desert? Tell us @BritandCo.

Amanda Scriver
Amanda Scriver is a passionate storyteller and body image advocate based out of Toronto, Canada. When she isn't writing for various publications, she finds time to Keep Up With The Kardashians while partaking in life's greatest pleasure: the chip buffet. Don't ask her what her favorite restaurant is, it's complicated
Ladies First
Current Events
Ladies First Womens Health
More From Current Events