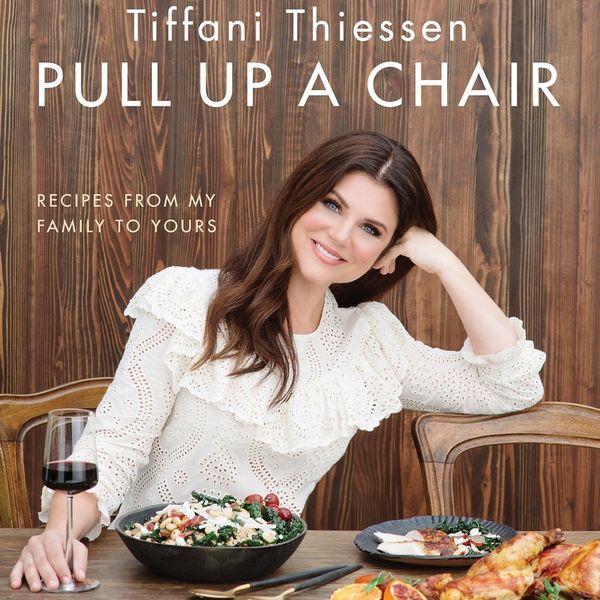 Growing up, you may have dreamed that Kelly Kapowski of Saved By the Bell could be your best friend, and now as an adult, you secretly hope Tiffani Thiessen will invite you as a guest on her Cooking Channel show Dinner at Tiffani’s. No matter if she’s playing a character or herself, Thiessen has a girl-next-door approachability that so many of us have loved for years. And the truth is… she’s as welcoming and kind IRL as when she’s on camera. While at BottleRock Music Festival in Napa, California this Summer, we caught up with Thiessen to discuss her first cookbook, Pull Up a Chair ($30), which comes out Oct. 2.

Thiessen, sporting black capri overalls, sipped on a frosé while she chatted with us backstage. “Overalls — they’re in again,” she joked, adding that the ’90s fashion essential serves a functional purpose when she’s cooking. “I don’t have to wear an apron.” This classic-with-a-twist mentality plays true with her food too. The theme appears abundantly in her new cookbook, which took three years from start to finish. Thiessen explained, “The ‘classic with a twist’ vibe started when I would take my mom’s recipes and modernize them. They’re recipes she had been doing for 30, 40 years.”

Though Thiessen’s Cooking Channel show (which ran three seasons) is entertaining-centric, the cookbook’s predominantly about what’s on rotation in her household. “A lot of my family favorites are in the book. I would say more than half are brand-new [recipes],” Thiessen, who shares daughter Harper, 8, and son Holt, 3, with husband Brady Smith, said. Though the focus is on meals for the fam (like stuffed french toast), that’s not to say party food doesn’t appear at all. Thiessen explained, “What’s so important to me is throwing dinner parties. I love them a lot. I compiled a whole separate chapter on just parties and how I plan them.”

Thiessen couldn’t pick fave recipes from the cookbook, but she did reveal what gets requested the most frequently from those closest to her. “My husband is a Texan so probably short rib enchiladas; I call them ‘Brady’s Favorite Enchiladas,'” she said. “My son, since he’s still so little, loves my mac and cheese, of course. My daughter loves my pizzas. My friends come over for chicken pot pie.”

The Netflix star, currently filming the next season of Alexa & Katie, focuses so much of her attention on satisfying other people’s cravings that we had to know what she whips up for herself. That question made her laugh. She edged in closer and lowered her voice, “I’m going to say something really funny. I love to cook, but I don’t cook for me. I want to cook for other people. Hence the title of my book Pull Up a Chair is to have people pull up a chair to my table, and we can connect. [If it’s just me] I would be happy eating cheese and bread and an amazing crudité platter and drinking wine. Truly.”