9 Timeless Essentials That Changed the Way We Dress 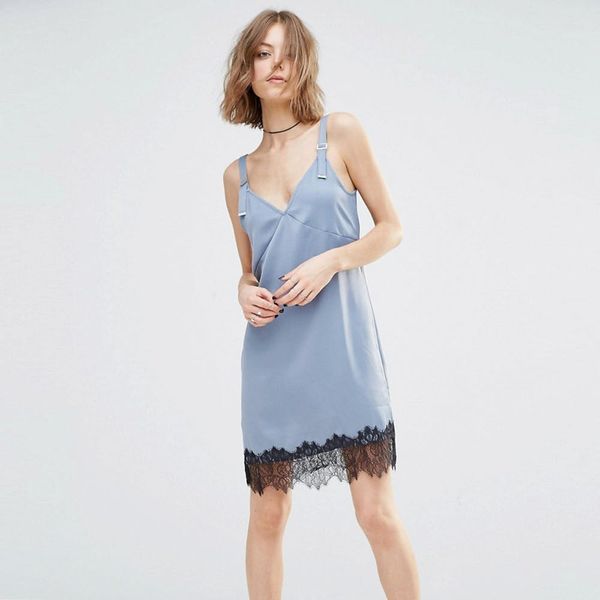 Fashion, much like art, is ever-evolving, reflecting the mood of the moment, pushing boundaries and serving as (extremely stylish) social dialogue. While flirty off-the-shoulder dresses make us straight-up swoon and bomber jackets send our hearts a-flutter, it’s those unsuspecting pieces that have made the biggest impact on the sartorial scene. From wrap dresses to sleek sneakers, the nine trends below not only hold a place of prestige in our closets, but have also changed the way we approach everyday dressing.

1. DVF Julian Two Silk Jersey Wrap Dress ($398): You can’t have a conversation about iconic fashion items without mentioning Diane Von Furstenburg’s timeless wrap dress. Over forty years after it first debuted, the sexy, ladylike silhouette is still the picture of perfection, and one of the most versatile pieces to grace any woman’s wardrobe. Be it a networking event or a dressy dinner date, the flattering frock is the epitome of effortless elegance: It’s easy to wear and style on the go — basically every girlboss’s dream.

2. Express Edition Drapey Boyfriend Blazer ($198): Yves Saint Laurent started a fashion revolution with his Le Smoking in 1966 — a menswear-inspired tuxedo that spurred a decades-long love affair with androgynous dressing. The tailored topper has fierce femme written all over it and has infiltrated the industry, establishing itself as a key component to any new-season lineup. This sleek take on YSL’s original would look ah-mazing with a sheer bodysuit, high-waisted trousers and a glitzy box clutch for a swanky soiree or drinks with the girls.

3. Lauren Ralph Lauren Blaine Studded Backpack ($348): Who would’ve thought that something as simple as a backpack could take the fashion world by storm? But that’s exactly what happened when, in 1984, Prada introduced its nylon backpack, which became a status symbol practically overnight. Backpacks are now a staple among the fashion set, and not just for their effortless throw-and-go appeal — designers have seriously stepped up its style game, with show-stopping details like don’t-mess studs and new architectural silhouettes.

4. Free People Strappy Side Bra ($30): The era of athleisure hasn’t just shifted the industry’s focus from done-up duds to laid-back joggers and statement sneakers: The obsession with sports chic has made a major impact on — wait for it — lingerie. #Lazygirls everywhere are parting ways with traditional underwires and padded undergarments for lightweight pieces that keep the girls in check without all the uncomfortable extras. And these bad boys aren’t just your typical sports bra — with details like strappy, Insta-worthy backs and racy lace, they’re bonafide icons in and of themselves.

5. Free People Viceroy Printed Maxi ($228): Festival season wouldn’t be complete without at least one fabulous free-wheelin’ frock, and that just might be thanks to rock goddess Stevie Nicks. Known for her bohemian babe threads, the Fleetwood Mac front woman’s penchant for bodacious bell sleeves, flowy chiffon and ethereal silhouettes is now a standard at Coachella and in the city streets.

6. First & I Lace Trim Slip Dress ($43): The slip dress is a symbol of the shift from the fashion sins of the ’80s (can they really be described as anything else?) to the more modern, streamlined aesthetic that dominates the industry today. A former fave of super models and grunge goddesses like Kate Moss and Courtney Love, the slip dress is feminine yet unfettered, making it the ideal companion to menswear-inspired separates and classic closet essentials alike.

7. Adidas Stan Smith Sneakers ($114): Whether you attribute the explosion of the sneaker as an It-girl essential to hip-hop fashion, Gucci back in the ’80s or the crop of haute designer and heritage brand collabs that started popping up in the early 2000s, one thing is for certain: Sneakers, much like denim, changed the way we do off-duty dressing. A stylish pair of trainers is now an undisputed essential for fashion enthusiasts and lazy girls everywhere.

8. C/meo Collective Better Things Skirt ($140): We can all thank Mary Quant and the Parisian André Courrèges for a little thing known as the mini skirt, the OMG-worthy bottom that practically set the world on fire. While the shortened hemline is no longer the feminist symbol of liberation it was at the time (sayonara, matronly silhouettes), it’s almost impossible to imagine a closet without one of these numbers, especially one with this much sass.

9. Mango Metallic Trench ($100): Rain in the forecast? Call in the reinforcements: your handy trench coat. Originally designed at the turn of the 20th century to keep soldiers warm, dry and well-equipped (hello, pockets!), the look made a move to the streets in the 1920s for both its versatility and sharp, structured look that exuded down-to-business appeal. The elegant outer layer gained major traction after being featured in films and becoming a favorite of movie stars, artists and even royalty — it eventually trickled down through ranks, becoming an essential for both men and women. Best believe you’ll spot one of these stunners on the likes of some of the most stylish women around today, e.g. Alexa Chung, Rosie Huntington-Whiteley and Clémence Poésy. While there’s nothing quite like a classic, this metallic interpretation is straight-up stunning with its blush pink coloring and relaxed styling.

Libby MacCarthy
Libby MacCarthy is an urban planner turned writer with a love (bordering on unhealthy obsession) of all things fashion and beauty related. She lives for perfectly brewed coffee, farmer's markets, dinner parties and perusing impeccably designed boutiques. When she's not on the hunt for the latest trends, you'll likely find her plotting her next adventure or nose deep in a book. Libby currently splits her time between the East Coast and her adopted home of France. Follow her daily adventures on Instagram.
Fall Style
Trends and Inspo
Fall Style Summer Fashion Summer Style
More From Trends and Inspo