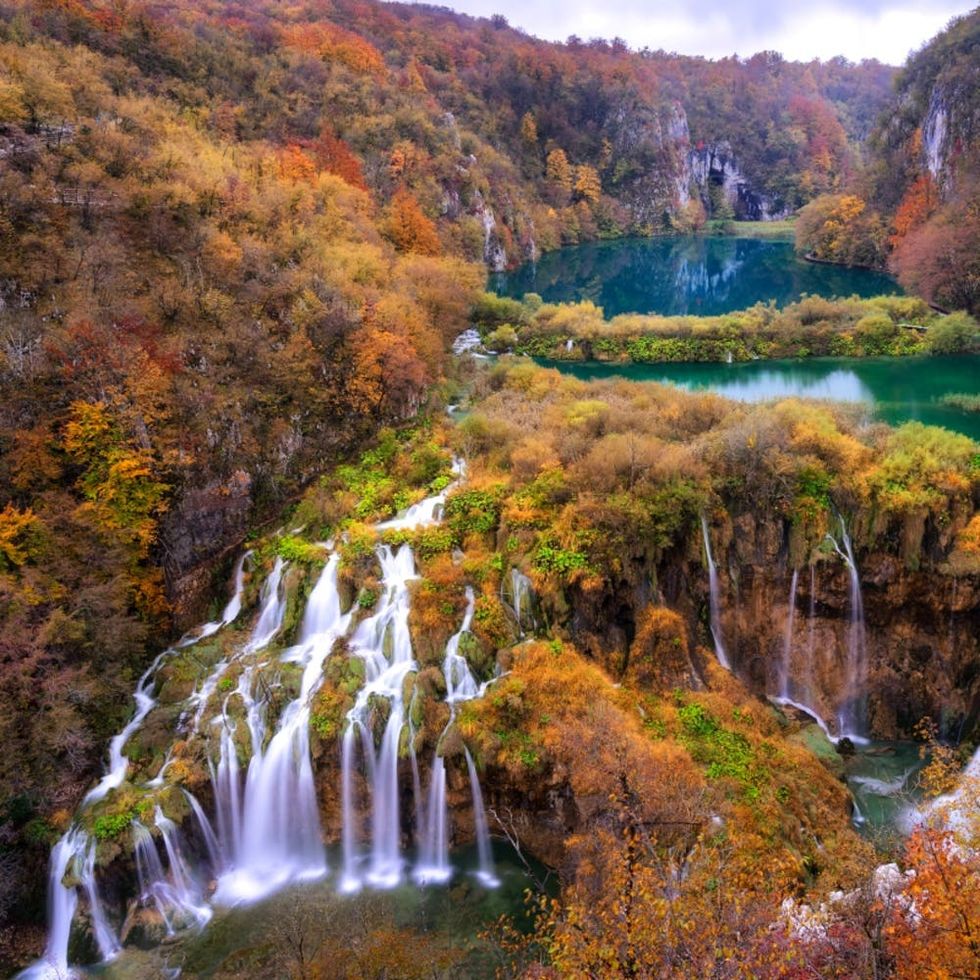 Have a travel bucket list full of historical sites and ancient natural wonders? Us too. Experiencing some of the globe’s most famous places always makes for an exciting and educational getaway. We’ve rounded up nine UNESCO-approved locales that prove to be even more enjoyable after the summer ends. You’ll love roaming around without breaking a sweat, taking selfies without feeling completely crowded, and seeing some of the world’s most spectacular landmarks amid vibrant, Insta-worthy foliage.

Dubrovnik and the coast of Croatia are must-sees any time of year, but the turquoise waters, untouched forests with Instagram-worthy foliage, and stunning waterfalls of Plitvice National Park are major reasons to visit this wonder specifically during fall. Cooler temperatures also mean smaller crowds and a more relaxing vibe than during the summer high season. “Exploring the Plitvice Lakes in Croatia is consistently rated as a top itinerary highlight for our travelers on our Best of Balkans and Mini Balkans trips during fall,” affirms Contiki president Adam Cooper. “It’s pristine, preserved, and full of autumn adventure.”

The cluster of cultural grounds at Al Ain makes up the UAE’s first curated UNESCO site. The oases come with lush gardens and a surprise choir of singing birds in one of the world’s most bustling cities, the emirate’s eponymous Abu Dhabi. Visiting in fall is one of the best times to see this part of the world because the desert starts to cool down but the winter crowds are yet to arrive. “Expect an in-depth look into the emirate’s ancient and important past — Al Ain is one of the oldest permanently inhabited places in the world and home to the UAE’s earliest discovered mosque,” promises Omar Salem Al Kaabi, Al Ain Oases manager. “Al Ain Oasis opened to the public only two years ago, and it now provides an even better reason to visit Abu Dhabi.”

Ephesus, Turkey: Fall is still warm in Turkey, which makes it an ideal time to see some of the country’s top cultural sites. Hierapolis, famous for its hot springs, has been used as a spa since the second century, and Ephesus was founded at least four millennia ago. “Both Hierapolis and Ephesus are ancient Turkish destinations that are home to so much history,” enthuses Peggy Goldman, president and founder of Friendly Planet Travel.

The famous archeological areas of Pompeii, Herculaneum, and Torre Annunziata were once thriving Roman settlements, but now travelers can explore the preserved ruins of their streets, homes, businesses, and temples — without suffering in the scorching summer heat. Plus, Italy has tons of festivals, markets, and lower-priced accommodations available in autumn. “There’s a lot of history to be uncovered in Pompeii,” explains City Wonders managing director Alberto Ceccarelli, “and that’s why we only choose local expert guides that are certified specifically for this UNESCO site.” Treat yourself to a tour if you’re looking to truly understand what the final days in Pompeii were like, as well as what some of the most famous buildings and houses were used for.

One of the more recently recognized locations on our list, Champagne was officially named a UNESCO World Heritage site in 2015. Its vineyard cultural landscape, which gave birth to Champagne wine, boasts beautiful hillsides, houses, and cellars that belong on every wine lover’s bucket list. Visiting in fall — wine harvest season — takes the experience to another level. “The region’s hillsides, houses, and cellars protected under UNESCO are a multisensory experience and a must for any vino tourist, especially given the record-breaking wine harvest this fall,” shares Vincent Parinaud, the general manager from the neighboring Royal Champagne Hotel & Spa.

The once-lost city of Angkor — home to the iconic Angkor Wat temple and Ta Prohm (one of the filming locations for Tomb Raider) — is full of towering stone overgrown by the jungle. This awe-inspiring historic sight is even more beautiful in the fall as surroundings turn to hues of gold, orange, and red. “Angkor Wat is one of those unbelievable sites that make visitors feel like they’ve stepped into a movie or traveled back in time,” says Melissa da Silva, president of Trafalgar, a travel site. “Splurge on a guide who can take you through the city so you can learn about the history while inside the temples.”

“Giant’s Causeway is another one of our most popular sites,” shares da Silva, who is also the president of Brendan Vacations. “One of our guests’ favorite parts of a visit is the stories they hear from local guides; the legends of the causeway are endless, and they’re almost as magical as the views of the causeway itself.” Fall is arguably the best time to scope out this epic scenery in Northern Ireland, which boasts thousands of geometric basalt columns from an ancient volcanic eruption — the crisp Irish air and clear skies make the location even more stunning than it is during other seasons.

You don’t need a passport to visit this truly awesome site: It’s just outside of Bowling Green, Kentucky. Mammoth Cave, which formed over 100 million years ago, is one of the longest underground cave systems in the entire world. Adventurers will especially love this experience, since some tours will take you more than 300 feet down into the ground and have trails that require flashlights. If you’re more of the above-ground type, expect gorgeous scenery for biking, hiking, and waterfall watching. “Mammoth Cave, especially during fall, is a wonderful place to visit with something for everyone — families, outdoors adventure groups, couples, etc.,” says Molly Schroer, a spokesperson for Mammoth Cave National Park. “And while most national parks become too cold to visit, the caves stay in the mid 50 degrees, which provides a refuge from the cold.”

Banks of the Seine

From the Louvre to the Eiffel Tower, the evolution of Paris and its history can be seen from the Seine River. Sail along the Seine to enjoy the extensive historical site, and stop to experience autumn in Paris, Vernon, Les Andelys, Conflans-Sainte-Honorine, Rouen, and Caudebec-en-Caux — autumn means it’s less crowded and filled with colorful foliage. “No visit to France would be complete without a stroll along the banks of the Seine River,” says Ellen Bettridge, president & CEO of U by Uniworld. “We take that to the next level as our guests sail along the banks, all while stopping at hidden-gem locations along the way with U’s new itinerary through Northern France.”
Krista Gray
Krista Gray is a web producer and freelance writer who lives in San Francisco. When she's not working with clients through her company GoldSquare, she loves reading, traveling, and learning new things.
Autumn
Travel
AutumnCreativityinspirationInstagramVacation