7 Beautiful Places to Visit in Croatia (Beyond Dubrovnik) 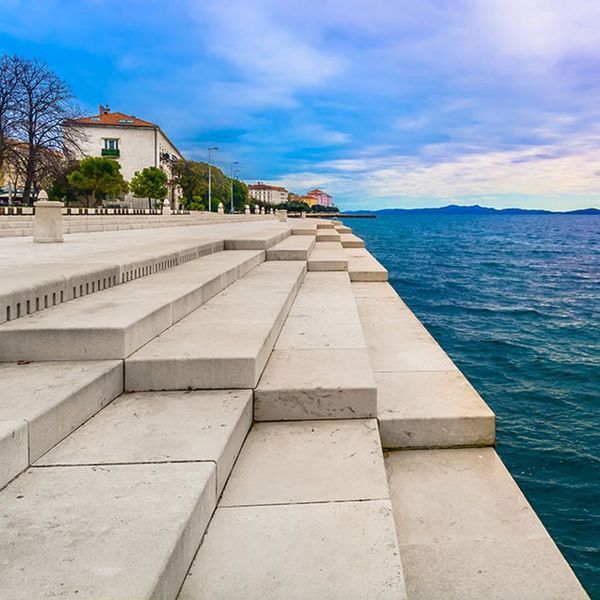 Since the first season, we’ve been binging Game of Thrones and subsequently filling our Pinterest pages with dream boards of Dubrovnik, where much of its filming takes place, but that is only one small part of the gorgeous country of Croatia. It’s also filled with islands, national parks, and even more medieval architecture than you could possibly imagine — plus lots of meat and fish to eat. Not to mention, Croatia is blowing up right now when it comes to hot coastal destinations (and it’s great if you’re traveling on a budget). Take a peek below at these Croatian hotspots that should be on your list to hit for your next getaway.

1. Zadar: One of the northern coastal cities, Zadar is famous for its picturesque steps the Sea Organ, a modern art installation that merges right into the ocean and actually makes musical sounds via the waves. The nearby Monument to the Sun is another of the city’s claims to fame; the art piece is inspired by the solar system and Zadar’s amazing sunsets (this needs to be your first Instagram of the city for sure, especially if you arrive by ferry). While there you can grab drinks at the super popular Garden Lounge along the water. Then, when you actually enter the city, stop at the Venetian walls and walk along the fortress of the city, once a part of the Republic of Venice. In terms of beaches, there are obviously a ton, including the city beach Kolovare, but if you want the best face mask of your life, take a day trip to Nin close by. There you can bathe in medicinal mud, sunbathe, and then wash it off on Queen’s Beach.

2. Hvar: The island is known for its ritzy port area with ornate hotels, restaurants, and nightlife, but if you travel a bit from the center, you can find its real treasures. If you’re looking to be one with nature, definitely make the trek to Robinson Beach by hiking along the Dalmatian coast, where you can find picture-perfect beaches (just note that a few of the areas are nude!), or book a sailing excursion to the Pakleni Islands for only about $30 USD. Hvar is most famous for its lavender fields, which you can tour to see the gorgeous purple plant in bloom, especially during May through July.

3. Split: When you reach the charming city of Split, head straight to the old section to climb up to the top of the cathedral’s bell tower and soak in the views below, especially of the Roman remains of Emperor Diocletian’s Palace and Jupiter’s Temple. Walk down along the sea, watch the boats come in, and have a fresh skewer of chicken or beef and veggies, or try the local black cuttlefish risotto at Fife Restaurant, one of the city’s staples. On your way back along the sea, it’s totally worth stopping for a fig ricotta or cheesecake-flavored gelato at Pumparela Gelateria (yes, there is amazing gelato in other places besides Italy).

4. Korcula: Another beautiful but typically less crowded island is Korcula (pronounced “Kor-chula,” if you want to sound like a local). It’s a two-hour ferry ride from just about every major location — Split, Hvar, and Dubrovnik — and could be the perfect place to stay if you’re into constant adventure. You can tackle anything from windsurfing lessons on Banje Beach to hiking to the top of the mountain San Ilija. The one can’t-miss aspect of Korcula is the wine — there is a white wine variety, Grk, that exists only in the beachy village of Lumbarda. Seeing the island by bike can be the most fun, scenic activity for getting in a vacation workout. The best way? Definitely a wine and bike tour. (Just please wear a helmet.)

5. Vis: You may recognize the adorable island as the location where Mamma Mia 2 was filmed and Cher arrived on a private jet (yup, that was not actually Greece). But Vis is worth visiting for the incredible scenery and natural wonders like the narrow Blue Caves right off its coast, a sea cave lit by natural light in a bluish-silver color, which were not in Mamma Mia. Ferries are available from Hvar island or Split, or you can really go for it and book a five-island tour which includes Vis and its tiny island of Biševo, which may or may not include a friendly Croatian dolphin sighting. Hopping off the boat you’ll find some of the best pizza in Croatia (really) at Karijola Pizzeria, and more lobster than you’ll find in New England just about anywhere on the island.

6. Krka National Park: The perfect day trip from Split’s city center is an escape to Krka — in just an hour and a half, you arrive at a slice of paradise, the ridiculously amazing waterfalls of the Krka River that you can actually swim in. Get right off a bus tour and immediately transport yourself back in time to the 19th century, where you can peek at the millers’, blacksmiths’, and weavers’ old shops, all powered by hydropower in the park. Then, go for a swim in the Skradinski Waterfalls — just buy water shoes to be safe; it’s not worth roughing it in the rocky river. Afterward, munch on a Nutella pancake or buy candied orange peels, practically a Croatian delicacy, from one of the many stands in the park.

7. Rijeka: If your trip is remotely romantic, or you’ve been Bumbling in Croatia and want it to be (get more tips on how to find love on the open road here), head to Rijeka in the northern Adriatic. The awe-inspiring views from the Castle Trsat and the baroque cathedral of St. Vitus are exactly what you need to kick off date night. There’s the Maritime Museum, housed inside the 19th century Governor’s Palace, on the history of Croatia’s Adriatic Coast to keep the evening going, plus the freshest seafood imaginable, like prawns and octopus, in all the restaurants along the Korzo, or main street — perfect for strolling hand in hand. End the night with a concert at the Hartera Paper Factory, an abandoned factory that’s now a popular site for tours and music festivals.

Tag us in your favorite Croatia photos so we can relive the magic on Insta @BritandCo!

Mara Santilli
Mara Santilli is a freelance writer based in New England. Her work has appeared in several publications, including Shape and Marie Claire. When she isn't writing, she can be found munching on any piece of dark chocolate she can get her hands on, plunking out her favorite acoustic songs on the guitar, and finding the cheapest Broadway tickets possible. Follow her adventures on Instagram to see where she's headed next.
Travel
Travel
Travel Vacation