The Top 10 Travel Destinations, According to Millennials 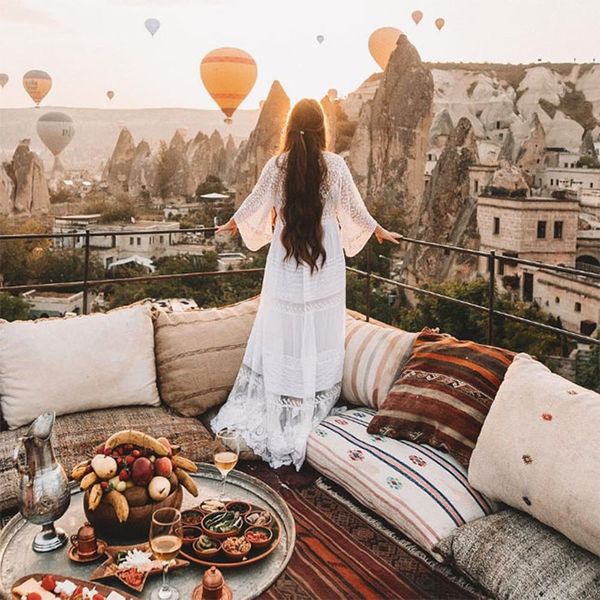 Nothing gives you FOMO more than scrolling through envy-inducing travel photos on Instagram. But the ‘gram also has some positive potential when it comes to travel: It’s a great tool to help you plan your next vacation and pick the perfect destination. And Earth, a millennial-focused travel media platform, recently released their list of the top 10 travel destinations for millennials.

Over 100,000 of @earth’s millennial Instagram followers answered the following question: “If you could go anywhere on Earth, where would it be?” In addition, the company tracked Instagram geotags of the 100 most highly followed travel influencers, including Jack Morris (@doyoutravel, 2.8M followers), Emilie Ristevski (@helloemilie, 1.1M followers), and Sam Kolder (@sam_kolder, 965K followers).

“We’re excited to harness data from the most influential travel creators on Instagram and our engaged, wanderlust-minded audience, so we can unlock the next must-go global destinations,” said Earth founder Andy McCune in a blog post on their site. Scroll on to see the results — and all the Insta-inspo you’ll need to book your next epic vacay.

1. Tulum, Mexico: Tulum has it all — the beach, the jungle, Mayan ruins, trendy restaurants, and fabulous shopping. And it’s fast becoming one of the most popular eco-tourism destinations, with people flocking there for wellness retreats and spas like the Mayan Clay Spa. It’s also a go-to spot for bachelorette parties. So we’re totally not surprised that it landed at number one on this list. (Photo via @earth / @alexstrohl)

2. Amsterdam, Netherlands: Amsterdam has always been a must-see European destination for the canals, the biking (it’s one of the best cities to bike around), and the famous (ahem) coffee shops. It’s also quite a foodie destination; Foodhallen, for starters, has more than 20 open-air restaurants. “Amsterdam is our very favorite city in the world. There’s something very special about the collision of design, arts, and so many different cuisines. It’s a historical look back at the past, and a wonderful peek into the future,” said Jessica and Garrett Gee (@thebucketlistfamily, 1.2M followers), in Earth’s blog post. (Photo via @earth / @framboisejam)

3. The Islands of Greece: This has been a dream destination for millennial women ever since we saw Alexis Bledel take her trip to the Greek Islands in The Sisterhood of the Traveling Pants 2. Oh yeah, and also because of those beautiful seaside views and the healthy lifestyle and fresh food there. It’s no wonder the Greek island of Ikaria is a Blue Zone, where many people live into their 90s. “The Islands of Greece, made up of destinations like Santorini, Mykonos, Milos, and Zakynthos, are a must-visit,” said McCune in the blog post. “The crystal blue waters, world-class beaches, stunning architecture, and amazing food make the islands a perfect destination for any traveler.” We have to say, we wholeheartedly agree. (Photo via @earth / @doyoutravel)

4. Mexico City, Mexico: The largest city in Mexico is becoming a hub for young travelers. It boasts an impressive museum and art scene, stunning architecture, bountiful shopping, and scrumptious food (hello, tacos). “Mexico City is a bright, colorful city centered around culture and food. Condesa is my favorite neighborhood — full of amazing coffee, historical buildings, fresh smoothies, and locals running errands around town with their pets. The city feels natural and like you’re falling into a routine right off the bat,” said Sam Landreth (@samlandreth, 106K followers), in the post. (Photo via @earth / @samlandreth)

5. The Maldives: Located in the Indian Ocean, the Maldives is redefining what a beach vacation looks like. The popular honeymoon destination has crystal clear waters that offer out-of-this-world snorkeling. And its floating resorts are becoming its trademark. All in all, it’s a top travel spot for young people looking to bask in the sun and relax in luxury. Alexander Williamson (@alexpreview, 214K followers) summed it up best: “Maldives is the kind of destination where you want to constantly pinch yourself just to be completely sure that a place like this really exists.” (Photo via @earth / @missangievilla)

6. Algarve, Portugal: Portugal is having a moment: It had the most foreign travelers ever visit in 2017, and continues to make a name for itself as an up-and-coming European destination due to its diverse geography, from the urban center of Lisbon to its mountains to its beaches like Algarve. “While many travelers will be drawn to the vibrant colors of the capital, Lisbon — make way for the southern coast of Portugal. Red sandstone cliffs and turquoise ocean clash in a battle of beautiful colors,” said Sam McAllister (@sam.travel, 20.3K followers). “Craggy sea caves dot seemingly endless golden beaches offering something for every type of intrepid traveler.” (Photo via @earth / @mvandersluis)

7. Marrakech, Morocco: The northwestern African country has been influenced by French, Arab, and of course, African cultures. From its sprawling desert to its cities, Morocco is famous for its architecture, interior design, and bright, vivid colors. Between bargaining your way through Marrakech’s souks, or markets, and feasting on delicious Moroccan cuisine, you definitely won’t be bored anytime soon. (Photo via @earth / @leoniehanne)

Poolside views on the coast of Italy. cc: @federicola

8. Positano, Italy: The colorfully stacked homes and the clear waters of the Tyrrhenian Sea have made Positano one of the most famous vacation spots in Italy. Located in the southwestern region of the country, it’s also close to several day trip spots you’re going to want to hit, like Pompeii, Naples, and the island of Capri. “Positano has been a classic destination since the ’50s, but it’s now the summer hot spot,” said McCune. “It’s a cliffside village located in Italy’s Amalfi Coast, and the views are just so breathtaking.” Translation: Add this one to your bucket list STAT. (Photo via @earth / @federicola)

9. Cappadocia, Turkey: You can combine a history lesson on the Ottoman Empire while experiencing a lush Turkish breakfast in this central Turkish town. The town is also famous for its “fairy chimneys,” cone-shaped rock formations made up of soft stone. “Cappadocia looks like it’s straight from a fairytale. It has these crazy rock formations that were sculpted by erosion. It’s actually a UNESCO World Heritage Site. Over half of the world’s hot air balloons take off from this region, so the sky is always filled with hundreds of balloons floating over the landscape which makes for incredible photos,” said McCune. That means you can be prepared to score a lot of likes when you visit this Insta-worthy location. (Photo via @earth / @alliemtaylor)

Waking up in paradise 🌴 cc: @gypsea_lust

10. Bali, Indonesia: Bali offers every kind of terrain, from the forest to the beach. Not to mention that it’s famous for its yoga retreats and shark diving. It’s also one of the top destinations for solo women travelers. “Bali is like no place I have ever been. It has the perfect concoction of world-class natural beauty, a ridiculous food scene, rich culture, amazing locals, and great climate,” said Sasha Juliard (@sashajuliard, 98K followers) in a press release. Enough said; pack your bags. (Photo via @earth / @gypsea_lust)

What’s your favorite travel destination? Share it with us on Twitter @BritandCo, or tag us in your most Insta-worthy travel photos on the ‘gram.