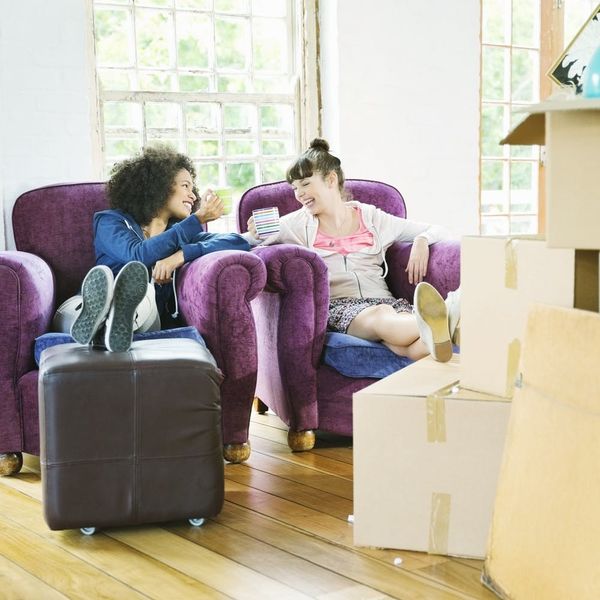 Ever since real estate hub Trulia started comparing renting and buying property in 2012, they’ve concluded that buying a starter home is a much better deal than renting in America’s largest housing markets. However, while most traditional “rent versus buy” statistics only account for renting an apartment or starter home solo, more than 20 percent of millennials are choosing to live with a roommate (a 115-year high, according to a recent report). This made us wonder… is renting a pad with your roommate really cheaper than investing in a starter home by yourself? A recent Trulia report says that renting with your bestie could be significantly cheaper than getting a first-time mortgage — but it all depends on where you call home.

According to recent Trulia data, most millennials in cities with astronomical rent and home prices like San Jose, San Francisco, and Austin should consider renting with a roommate instead of splurging on a substantial down payment. “Home prices continue to rise across the country, but only around half of the markets examined saw an increase of $100 or more in rent since last year,” Senior Economist at Trulia Cheryl Young says. “As a result, the rent versus buy equation is shifting. Since five years ago, exactly half of the 100 largest metros saw the savings from buying a starter home decrease or stay the same.”

But even though renting with a roommate is significantly cheaper than buying in key metropolitan areas, finding yourself a roomie isn’t the universally cheaper option across the country. For instance, the average person in Detroit will save 57 percent when they choose to buy over splitting the rent and residents of West Palm Beach in Florida also see a significant savings of 52 percent when choosing to invest in a starter home. “In eight of 10 markets where buying a starter home is most advantageous compared to renting, starter homes are less than $100,000 and a starter home can be had for $16,463 in Detroit,” Young says. “Even when splitting the cost, rents are comparatively not as low.” The cities where it is at least 50 percent cheaper to buy vs. rent are:

Of course, there are many factors to consider before buying your first home. Along with finding the right neighborhood and checking off all of your Pinterest board must-haves, you may find that discovering a starter home in areas where it is cheaper to buy could still be a struggle (Trulia’s recent Price and Inventor Watch notes that starter home inventory dropped more than 20 percent year-over-year nationwide). No matter what the statistics for your hometown says, it’s still a good idea to take the time to talk with an expert and seriously consider your living options. Whether it means renting solo, moving in with your college bestie, or finally pulling the trigger on your first home, don’t be afraid to run a few hypotheticals to make sure you’re getting the best bang for your buck.

Is renting with a roommate cheaper than buying a starter home in your hometown? Tweet us by mentioning @BritandCo.

(Photos via Trulia and Getty)

Ashley Macey
Ashley Macey is a lifestyle freelance writer who loves all things fitness, wellness, and creativity. When she's not exploring her home in the Pacific Northwest with her dog Max, you'll probably find her curled up with a good book and some hot tea. Follow her daily jaunts on Twitter.
Adulting
Adulting
Adulting Budget-Friendly money
More From Adulting