This Company Needs to Cool It With the Body Shaming Ads 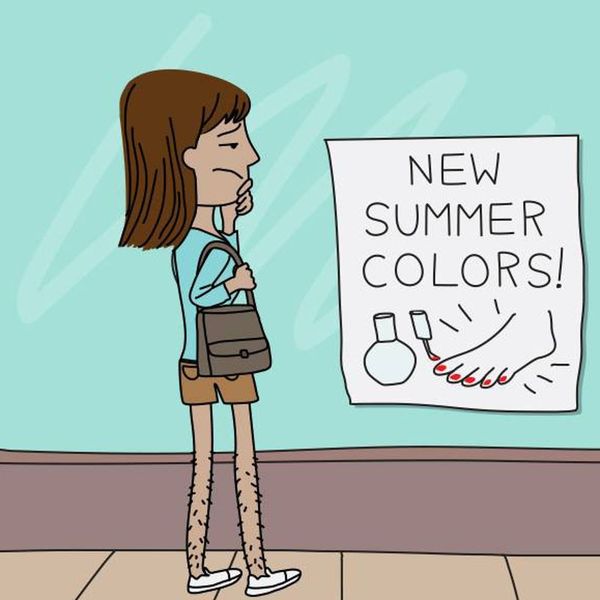 You know how there are two kinds of women? There’s perfect smooth angels of femininity and then there are hairy bridge trolls with breasts. At least that’s what these new Veet ads imply.

Veet, a razorless hair removal product, has been posting pictures on their official Facebook page that show two women side by side. The one in the left picture is always a woman whose life has been hindered beyond belief by body hair and the one on the right shows a woman who is presumably hairless form the neck down and living life to the fullest. These ads can also be used as a handy alternative to ipecac.

Ugh, leg hair causes soooooo much unwanted wind resistance when trying to play sports! This other one implies that women with body hair should be kept indoors to protect the rest of society from them… like the wolf man.

EGADDS! KEEP THAT HIRSUTE ABOMINATION AWAY FROM THE CHILDREN!

The company has received a lot of flak in the form of Facebook comments for these ads on their FB page. However, the only comments Veet has actually responded to as of this writing have been people who had problems using the products themselves. This isn’t the company’s first foray into questionable ad strategies — their deplorable “Don’t Risk Dudeness” commercial comes to mind as one to not watch.

We reached out to their customer complaints line and consumer goods company Reckitt Benckiser, who is listed on their website and lists Veet as one of the brands on their site, but no one could be reached to comment on the ads.

As a hair removal company, it makes sense that Veet might want to market a hair-free ideal, but you can reinforce that some women like having smooth legs without shaming women who want to have body hair. These ads seem especially tone deaf in a world that is just starting to celebrate celebrities with arm pit hair.

I think author Caitlin Moran said it best ,”the purpose of feminism isn’t to make a particular type of woman. The idea that there are inherently wrong and inherently right ‘types’ of women is what’s screwed feminism for so long.” So, Veet, just find a way to celebrate women and not critique them. No body hair = good, body hair = good. Done. Easy. Pay me now.

To shave or not to shave? Tell us in the comments!

Molly Sanchez
Molly Sanchez is a writer, comedian and lover of burritos everywhere. She has written for The Bold Italic, Liquid Bread, Thrillist and HelloGiggles. She devotes her time to Bloody Mary research, exploring San Francisco and promoting wide spread shower beer awareness and appreciation. Find her on Twitter @seriousmolly trying to get famous people to laugh at her jokes or on Instagram @mollyfuckingsanchez where she swears a lot.
Feminism
Home News
Feminism