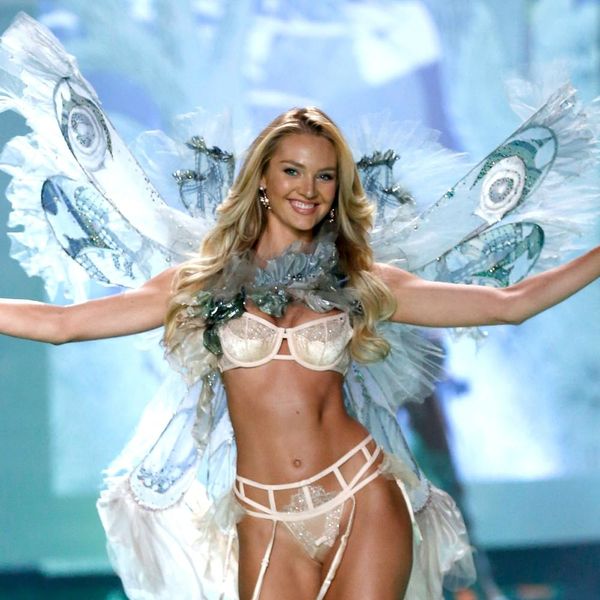 Between the insane Fantasy Bra that reportedly took more than 700 hours to make, the buzz surrounding Jasmine Tookes’ stretch marks and the less-than-flattering rumors about why models like Cara Delevingne might have gotten the boot from this year’s Victoria’s Secret fashion show (which VS is vehemently denying, going so far as to publicly invite her to walk), the anticipation surrounding this year’s extravaganza (December 5, 10/9c) is at an all-time high.

In addition to a stunning Paris backdrop and musical stylings from the likes of Lady Gaga, Bruno Mars and The Weeknd, we’re in for a night of unparalleled — if often outrageous — lingerie creations that we can’t wait to feast our eyes on. In fact, there’s been some real doozies since the show’s first televised broadcast back in 2001. In honor of the upcoming event, let’s take a look back at some of the former looks that would NEVER fly in 2016, shall we?

1. Selita Ebanks: Given the social media blackout many Americans have adopted to display their displeasure for Donald Trump taking office and the outrage that ensued over his comments regarding women and their, uh, anatomy in his now-infamous Access Hollywood video, this brow-raising look from 2007 has to top the list of outfits that wouldn’t fly in 2016. (Photo via Mark Mainz/Getty)

3. Caroline Trentini: What IS this even? A bell? A bunt cake dish? What the hell was even happening in 2007 for this to be a thing? (Photo via Mark Mainz/Getty)

4. Ana Beatriz Barros: Over the years, VS has toned down its looks quite a bit, leaving the dramatic flair for accessories (like those stunning wings), but back in 2003, more was more: Here’s a whole lotta’ tulle to prove it. (Photo via Frank Micelotta/Getty)

7. Karolina Kurkova: The 2001 runway show was a sea of plain white tops and bottoms, including this high-waisted corset panty set worn by Karolina Kurkova. Though the show has lost some of the flair of its earlier days, we still can’t imagine anything quite so… plain hitting the stage in 2016. (Photo via George de Sota/Getty)

8. Julia Stegner: This 2011 nightmare, in stark contrast, is a bit much, if we do say so ourselves: In fact, it kind of looks like a flamenco dance gone wrong. (Photo via Jamie McCarthy/Getty)

9. Alessandra Ambrosio: Can someone please explain the appeal of this T-strap lingerie trend that seemed to be so hot in 2003? *shudder* (Photo via Frank Micelotta/Getty)

10. Ujjwala Raut: Bedazzled EVERYTHING was another big ‘00s trend that has since gone down in flames — and taking a peek at these pageant-style sequins from 2003, we can kinddddd of see why. (Photo via Frank Micelotta/Getty)

Which look made you cringe the hardest? Share over @BritandCo.

Nicole Briese
Nicole is the weekend editor for Brit + Co who loves bringing you all the latest buzz. When she's not busy typing away into the wee hours, you can usually find her canoodling with her fur babies, rooting around in a bookstore, or rocking out at a concert of some sort (Guns N' Roses forever!). Check out all her latest musings and past work at nicolebjean.com.
Halloween
Style News
Halloween lingerie Victoria's Secret
More From Style News